Bitcoin falls below $9,500 as Libra’s Senate hearing has ripple effect on cryptocurrency market


It was less than a month ago that Bitcoin enthusiasts and the larger cryptocurrency market were lauding Libra as a catalyst to the ensuing bull-run. However, good times were never going to last long.

Over the past two weeks, Facebook has received a wave of criticism from the likes of the Federal Reserve Chair, the House Financial Services Committee, the Treasury Secretary, the Senate Banking Committee, and even the President himself. While Libra’s bright future has turned darker, or at least delayed, Bitcoin’s present is back in the red.

After breaking the $13,000 mark for the second time in a month last week, Bitcoin dropped over $1,500 in valuation, owing to the ‘concerning’ comments made by Jerome Powell, the Fed Chair, followed by the ‘Trump Pump.’ Following the Treasury Secretary’s press briefing on July 15, Bitcoin dropped below $11,000 and looked weak. As the Senate hearing beckoned, a drop to a four-figure valuation was on the cards.

From Senators questioning the age-old privacy problem of Facebook to calling Libra outright delusional, they reigned down on David Marcus, lead of the Libra Project and VP of Messaging Products at Facebook. The aging US lawmakers were concerned about Libra’s plan to overhaul national currencies and manipulate monetary policies, and with the “massive reach” of Facebook, that prospect looks even more menacing.

Marcus however, right from the outset maintained a pro-regulatory stance, opting to adhere to any regulation and work with any regulatory body to push out Libra. Facebook executives had previously stated that Libra was announced well ahead of schedule, in anticipation of the regulatory mess it would encounter. And so it has. 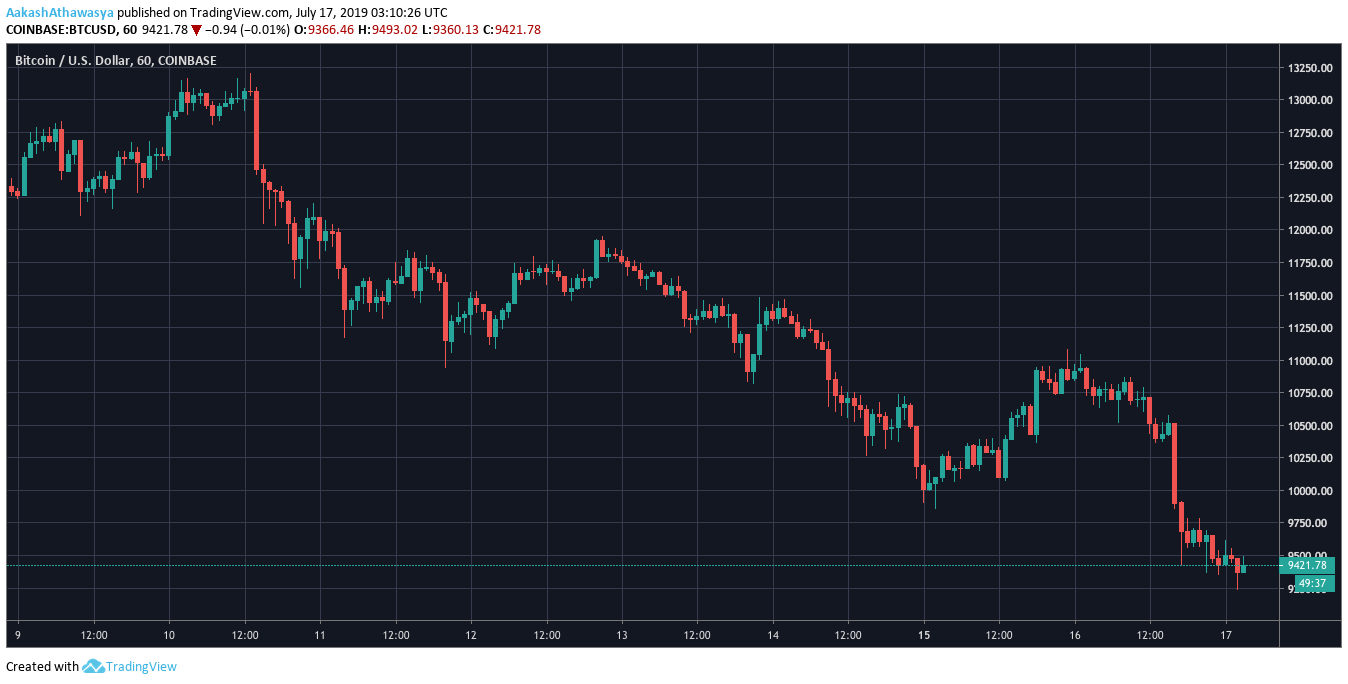 Bitcoin however, is taking the short end of the ‘GlobalCoin’ stick. Over the past week, the price has fallen by over 25 percent.

If you thought last week was bad, this week is worse. After Steve Mnuchin, the Treasury Secretary descended on the cryptocurrency market, the price shaved over $500. As the Senate hearing began, the price dropped by over $1,000 in less than 2 hours, to $9,500.

Bearing the brunt of this Bitcoin-Libra aftermath are the altcoins. Ethereum [ETH], the top altcoin in the market was down by over 14 percent, with the price below $200. Litecoin [LTC], a month out from its halving, saw a price cut of over 13 percent, and was trading at $78.69 as opposed to over $125 a few weeks ago. EOS [EOS] dropped below USDT on the charts, owing to a 15.7 percent drop and was trading at $3.66, with the $5 target now looking like a pipe-dream. Other top losers included Bitcoin SV [BSV], Tron [TRX], and Stellar Lumens [XLM], with XRP doing better than the rest, with only a 6 percent price dip.

With David Marcus heading to another House Financial Services hearing next week, Bitcoin will certainly be apprehensive.