Bitcoin handicapped: King Coin drops below its 50-day MA for the first time in 6 months


The bears have taken their first major scalp from the Bitcoin market.

Since breaking the $13,000 price ceiling, not once but twice, the Bitcoin bulls have taken a break. The price of the largest cryptocurrency in the market has been in a continuous decline since, after reaching its YTD high of $13,800 back in June.

This massive price fluctuation has resulted in the coin not only going back to a four-figure valuation, but also slip past a key indicator. Bitcoin dropped below its 50-day moving average for the first time since February 2019, when it was trading at $3,600, 62.5 percent less than the press time value.

Further, Bitcoin’s GTI Vera Band Indicators pointed to a selling pattern for the king coin. The indicator, which shows upward or downward movement, regained its lower band limit during the previous week as the price dropped below $11,000. It should be noted that the king coin saw a turnaround from its lower band limit during the start of the previous month, taking Bitcoin to its yearly high. 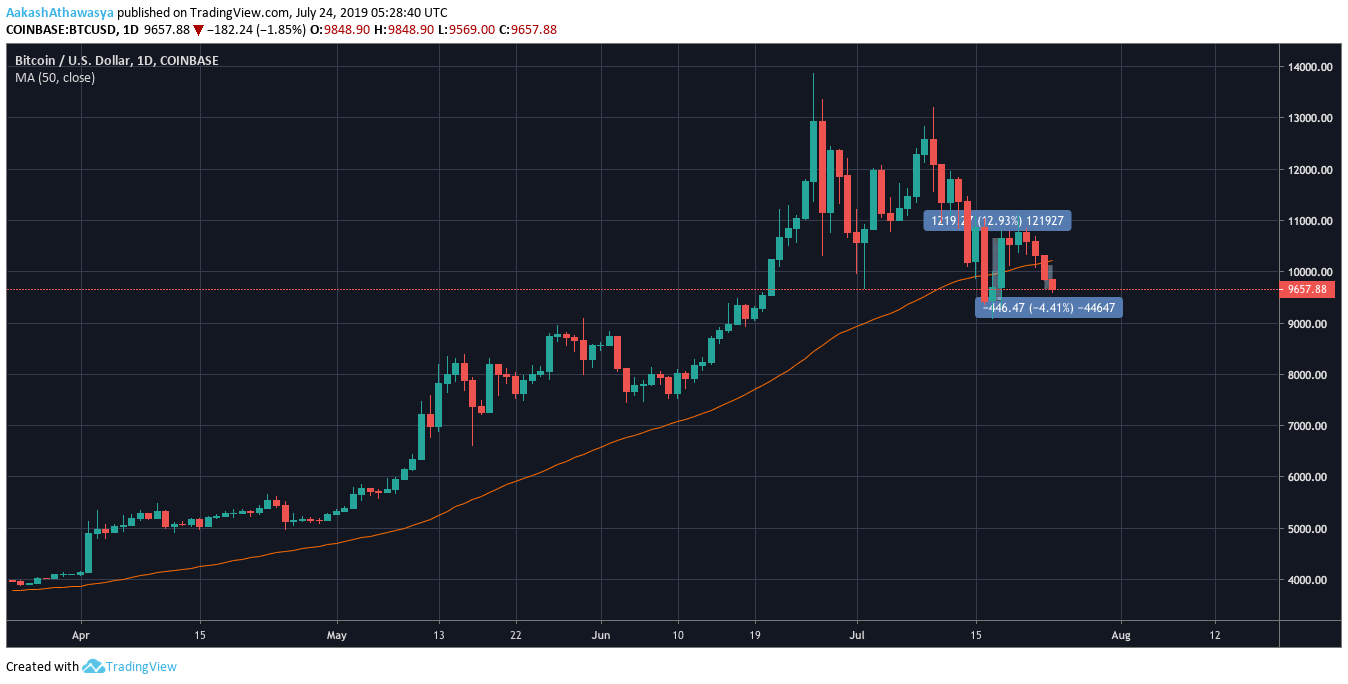 In 2019, Bitcoin took a good month to get going, experiencing its first massive push in mid-February when the price rose from $3,550 to $4,100, a 15.77 percent rise that pushed the coin over its 50-day moving average. Since then, the price has consistently been over the 50-day moving average, until a slew of externalities hit the Bitcoin market following the close of June.

Interestingly, the bane of the Bitcoin market today, was a boon a month ago. Unveiled on June 18, Facebook’s cryptocurrency foray, Libra, buoyed the price of Bitcoin and pushed the price up from $9,200 to as high as $13,800 within a few weeks.

However, no sooner did regulators get a whiff of this global ‘fiat currency-altering,’ ‘monetary policy destabilizing,’ private digital asset, they began a crackdown. The crux of this ‘crackdown’ was in the United States, with three Congressional hearings dragging the price down from the aforementioned high to a four-figure valuation.

Despite a fightback on 18 July during which Bitcoin pumped by over 12 percent in a two-day window, the bears persisted. Bakkt commencing their Bitcoin Futures trading beta testing also failed to shake off the bears as several FUD-ish sentiments took over the market. From the TD Ameritrade institutional Bitcoin trading tease which failed to manifest, to the possible ban on cryptocurrencies in India, several reasons have led to the price dropping once again down below $10,000 on July 23.