Bitcoin to continue with wayward movement; monthly close should be the focus, claims analyst


Bitcoin is neither here nor there. But, the king coin is everywhere.

The king coin is looking to close the week in a relatively stable condition, not an accurate reflection of the roller coaster of the past few days. Bitcoin, which began the week at over $11,500, shaved over $1,000 and then dropped below the $10,000-mark, all the way to $9,200 before beginning its peevish climb back up.

Owing to the back-to-back congressional hearings on Facebook’s Libra, the price of Bitcoin took a hammering. Calibra’s David Marcus sat before the Senate Banking Committee and the House Financial Services Committee and was peppered with controversial questions that took aim at not just Libra, but Bitcoin and the entire cryptocurrency world. Coupled with the hearings were the harsh words of Treasury Secretary Steve Mnuchin, and the negative press digital assets received at the G7 meeting in France.

However, the close of the week brought some respite, as Bitcoin pushed into ‘fifth-figure heaven’ and at press time, was trading in the green. Altcoins have also got their tails up, with Tron and Bitcoin SV leading the way on the back of important announcements. 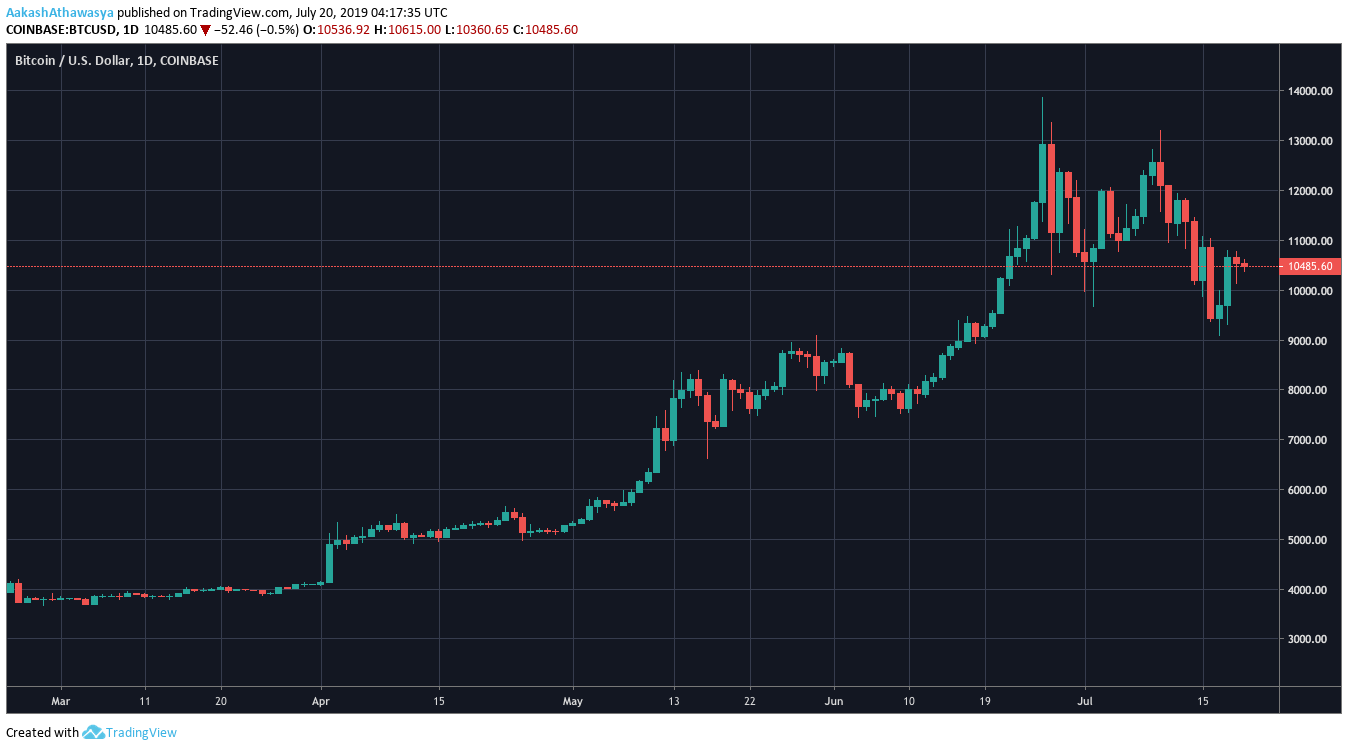 With the close of the month a little more than a week away, analysts are mulling over the weekly close as a key indicator of the overarching market health of the coin, rather than spurts of price movements.

Josh Rager, a crypto-analyst and member of the advisory team at Token Bacon and Level Invest, pinned $10,850 as the important price level to close above. He added that a close below the $10,189 level “wouldn’t be good,” as that would cause him to have a fit of “bear bias,” resulting in a move “below $9800.”

$BTC range to watch
As time goes new ranges and price levels will form
Marked out on the chart with $10,850 still the area to close above
A close below $10,189 wouldn’t be good and I’d have bear bias with a move below $9800s
Currently at range support pic.twitter.com/1k6fu7xDNb

The price of Bitcoin at just over the $10,500 mark will fund a daily support level of $10,350, according to Rager’s chart. In addition to the aforementioned levels of interest, the seasoned analyst stated that the monthly open for July, was around $10,759 and a daily resistance of $10,850 would be present till the month closes out.

As Bitcoin broke the $13,000 mark for the second time this year last week, Rager pointed out that if Bitcoin were to hover close to or even break the $13,800 mark, in terms of a monthly average high, this could add serious bullish momentum to the coin for the rest of the year. The level of $13,800 would also record a massive feat for Bitcoin, as it would be the ATH monthly close in the decade-long history of the coin, surpassing December 2017 – January 2018 as well.