The Foundation For Defense Of Democracies (FDD) in a report released July 11, 2019, has revealed the relationship between the U.S. Dollar and most popular cryptocurrency Bitcoin (BTC). The report also outlined possible outcomes of this relationship and how bitcoin is the currency of the future.

Many now wonder when bitcoin became a topic of national concern and presidential debates. This was especially triggered when the President Of The United States (POTUS), Donald Trump, debased the popular cryptocurrency and compared it with the U.S. Dollar.

For many crypto enthusiasts and evangelists, this was the beginning of the mass adoption of the cryptocurrency space in general. And in fact, in correlation to this belief, the controversial digital currency rose to stardom with a corresponding bullish movement in the following hours.

U.S. Dollar: The Beginning Of The End

While Bitcoin (BTC) has met with many skeptics in its decade long existence, it has come to be recognized and placed itself at the center of the world’s fast-growing technology currently preparing to disrupt this present financial system.

Financial Authority Shifting Towards The Blockchain

According to the journal, the United States holds the world financial power and pulls the strings as of today. Although, more than 50 years ago, the Dollar was not a thing of concern as the Great Britain Pound (GBP) was in control. However, the events that turn the situation around and placed the USD in limelight has now shifted to Bitcoin. This result was predicted to be similar to what was experienced between the Great Britain Pound (GBP) and the U.S. Dollar (USD).

However, the U.S. position of influence is not necessarily permanent. Technology has created a potential pathway to alternative financial value transfer systems outside of U.S. control. The target timeline maybe two to three decades, but these actors are developing the building blocks now. They envision a world in which cryptocurrency technology helps them eclipse U.S. financial power, much the way that the dollar once eclipsed the British pound

Decentralization All The Way

The power of decentralization of the blockchain has thrown an eye-opener to economic competitors of the United States. Countries like China might have seen a “savior” as to how the U.S Dollar could be stripped off of power. As these countries continually search out new channels and adopting cryptocurrencies, they seek to build financial systems that work outside of the United State’s grip and control. An excerpt from the journal also stated that,

“Efforts are underway around the world to build new systems for transferring value that works outside of conventional banking infrastructure. The Bitcoin software code enables users to send non-copyable digital assets, known as a cryptocurrency or digital currency, to another person without an intermediary, removing the role of the traditional banking sector…”

“U.S. adversaries see this development as an opportunity to reduce Washington’s ability to impose economic sanctions, which depend on intermediaries like traditional banks to monitor compliance…” 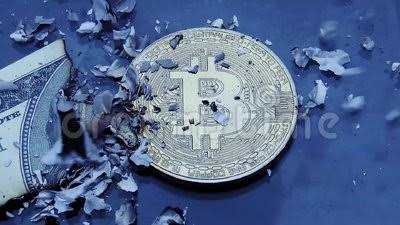 Bitcoin is slowly positioning itself at the center of the world financial system as the alternative(better) to the USD.