Bitcoin is still reeling from the late-September crash that pulled its price down to the four-figure range. After a magnificent run in the second quarter of the year, peaking with Bitcoin soaring above $13,800, the following quarter failed to meet the same standards.

In what began with Bakkt finally giving a confirmed date for the launch of its Bitcoin Futures contract, the cryptocurrency industry came a full circle with the actual launch flopping. As Bakkt failed to secure trading volume equivalent to less than 72 BTC, the king coin lost over 24 percent of its value and in the days following the BTC decline, the altcoins began to spur.

However, if we look at the industry through this concentrated prism, it would not do justice to Bitcoin’s relatively bullish price movements for the entire quarter. 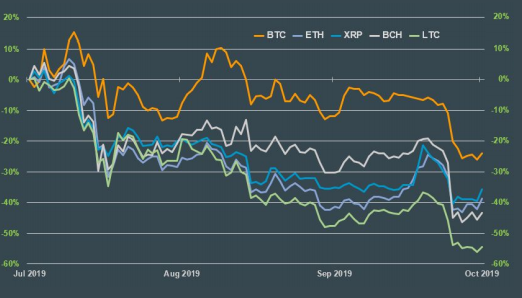 The Quarterly report by CoinGecko revealed that while the top 5 coins lost 39.2 percent value between July and September, despite Bitcoin’s drop from $13,000 to under $8,000, it dropped the least. Within the period, Bitcoin lost 24 percent of its value, the least of the top-5. Litecoin, which underwent its halving during the quarter was the biggest loser, dropping over 54 percent of its value and dropping out of the top 5, owing to Tether’s rise. Ether, XRP and Bitcoin Cash saw a decline of 39 percent, 36 percent and 43 percent in their prices, respectively.

It should be noted that for a brief period following Bitcoin’s decline on 23 September [Bakkt launch], altcoins saw an upswing. This upswing was marked by Ethereum, XRP and Bitcoin Cash trading in double digit greens as the king coin was falling.

Moving further down the coin ladder, we can see some changes within the order of the top-30, including some new entrants. The biggest positive leap was made by Tezos [XTZ], jumping 7 spots to 17th place, followed by Huobi Token [HT] which jumped by 5 spots. Dash [DASH] and Zcash [ZEC] took the biggest steps back by losing 5 spots.

The coins occupying the spots 11-20 saw several ups and downs in terms of rankings, with the maximum positive and negative movements concentrated there.

Among the new entrants into the top-30 were Dogecoin [DOGE], USDCoin [USDC], and Crypto.com Coin [CRO]. Stablecoins have seen relative positive movement, with respect to the market’s slumping nature. Tether [USDT] also managed to jump three spots and take the 5th spot on the market, overtaking Litecoin [LTC], and EOS [EOS].

The report, much like everyone else ,was quite excited to welcome DOGE into the top 30, stating,