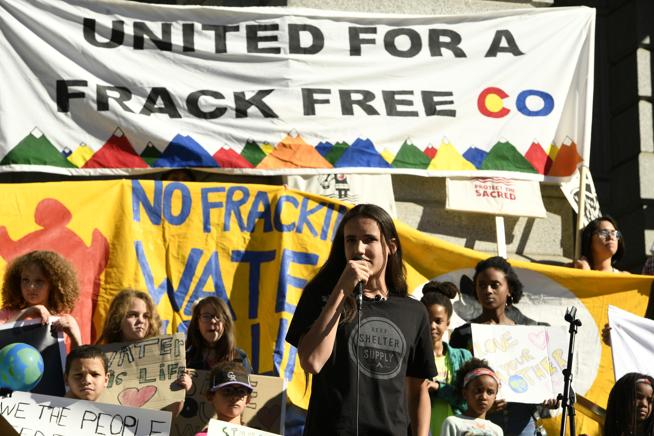 As young people and those wanting to support them across the country prepare to rally Friday for the Global Climate Strike, a dozen youth activists including a prominent movement leader from Boulder came together Wednesday on the step of the U.S. Supreme Court to underscore the time to act on the issue is now.

The group included seven young plaintiffs in the landmark Juliana versus United States of America, a case filed by 21 youth plaintiffs at U.S. District Court in Oregon, claiming the government violated young people’s rights by encouraging and allowing activities that harmed their right to life and liberty, and sought for the government to adopt methods for reducing greenhouse gas emissions.

The news conference was streamed over the Our Childrens Trust Facebook page, including Xiuhtezcatl Martinez of Boulder, who  said Wednesday that climate activism has consumed him since he was 6. Now 19, he is currently youth director of the Boulder-based Earth Guardians, which, organizationally, is also a plaintiff in the Juliana case.

In coming together to press that case, Martinez said, “We all were strangers, but we felt a unique sense of relatability, in each of our stories.

“But as young people we had already been expanding the impacts of climate change, not as some abstract future, but as a lived experience we are going through on a daily basis.”

There has not always been the palpable global energy around the climate change battle, Martinez said, recalling times when there were few press conferences and little press coverage. But those who shared passion for addressing the impacts of climate change — and preventing the continuing spiraling of its effects — “put this work at the forefront of our experiences,” he said.

“Our existence is our resistance,” he said. “I think one of the most powerful parts of this case is that we are changing the old constructs of what creating change and being an activist looks like.”

The youth were joined Wednesday by a peer from the international climate change community, Greta Thunberg arrived in the U.S. from Sweden —  by boat, to limit her carbon emissions — earlier this month. She led a protest outside the White House last Friday, and will be prominent in this Friday’s activities in the nation’s capitol as well. Thunberg, 16, garnered attention in 2018 with a one-day school strike in her home country to highlight climate change concerns. At Wednesday’s press event, she sat in the crowd and did not make public remarks.

Also on hand under sunny skies on the steps of the U.S. Supreme Court Wednesday were several members of Congress, who added their voices to the young people’s call for meaningful action.

U.S. Sen Edward Markey, D-Mass., said the Juliana case “goes right to the heart of the responsibilities which our government has to our people,” especially generations that will continue to arrive in the 21st Century.

“Your case, the Juliana versus the United States case, calls upon our government to do something about it, to take urgent action, to make sure the worst, most catastrophic consequences of this danger are avoided,” Markey said.

“The planet is running a fever. There is no emergency room for the planet, so we have to engage in preventative care,” he said, labeling climate change the healthcare, economic and moral issue “of our time.”

Joining them, too, was U.S. Rep. Kathy Castor, D-Tampa, who chairs the House Select Committee on the Climate Crisis, which held its first committee meeting Aug. 1 on the University of Colorado Boulder campus.

“I’m here as more than a member of Congress,” Castor said. “I’m here as a mom. I have two young daughters who are about your age. We have a moral obligation to this generation, our kids and our eventual grandkids, to action now. Congress has been entirely too slow.”

‘We can change everything’

But the young people are hardly putting all their hope on politicians. Several speakers emphasized there are three branches of government, and the judicial branch has an equal role to play in addressing climate change, and the Juliana case is a prime example of how they hope to prove that.

A U.S. District judge in 2016 ruled in pretrial Juliana motions that access to a clean environment was a fundamental right, which would enable to case to proceed, but the government has since sought to have the case dismissed on various grounds. Any trial in the case is currently stayed, pending resolution of numerous pretrial appeals filed in the case to the U.S. Ninth Circuit Court of Appeals.

But while the courts grind along at a rate that can be frustrating to players on both sides of the judicial equation, activists such as those who came together to speak on Wednesday are not going to just be waiting on court dockets.

Martinez urged people of every age who take to the streets Friday “to leverage this moment in history as a time when we change everything.

“I urge that these moments be followed up by concrete action to implement a concrete recovery plan … We have no time to waste. Whether we make it or not is entirely up to each and every one of us.”

Martinez concluded his remarks saying, “We all have a part to play in creating our future. Now is the time.”