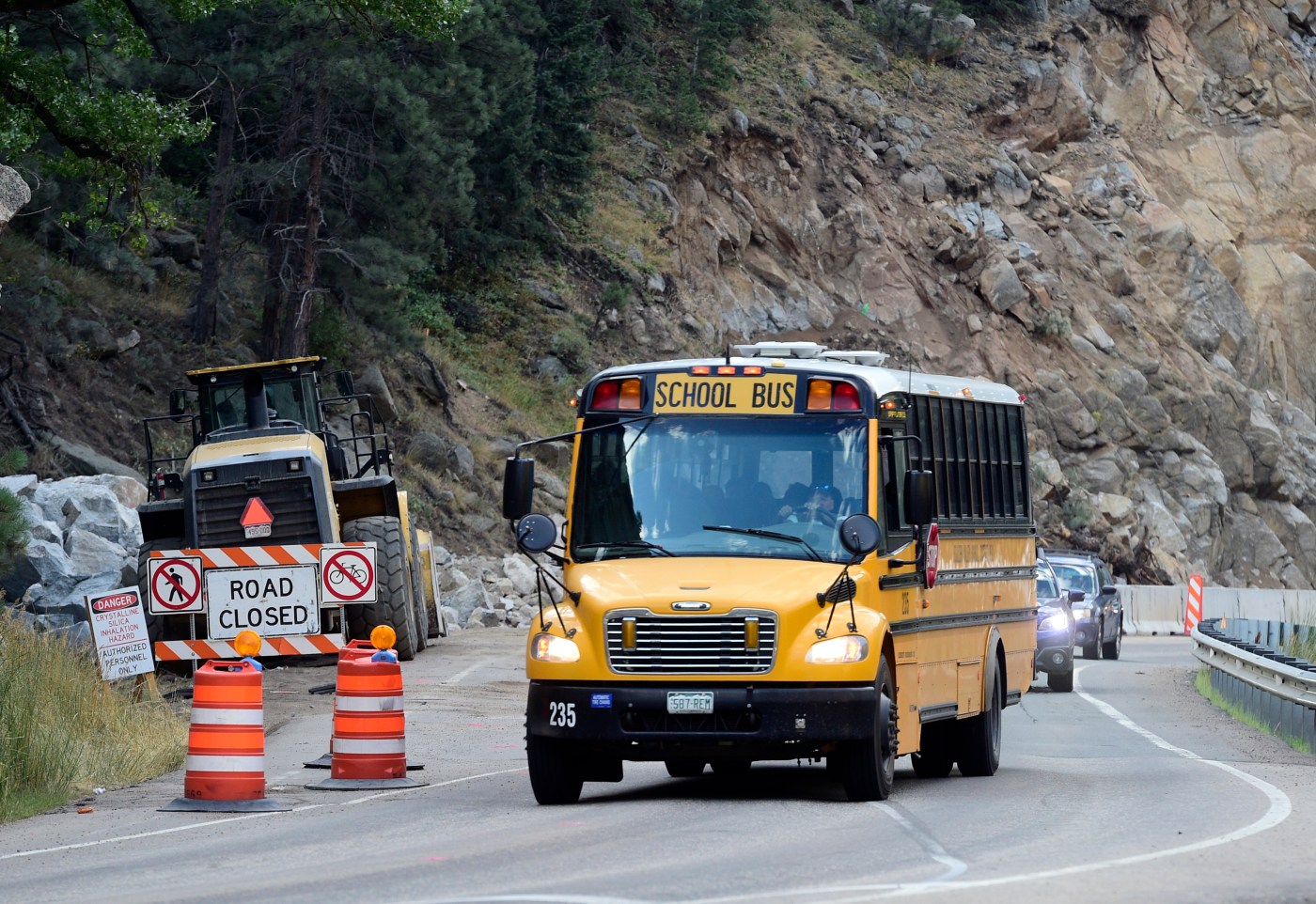 Parents of students who live off Sugarloaf Road in the foothills are upset about long school bus rides caused by the ongoing Boulder Canyon improvement project.

Their students, who are assigned to Boulder schools, are spending up to an hour and a half on a hot bus with no access to bathrooms, parents said. Once in Boulder, the bus stops first at Flatirons Elementary, then secondary students board another bus to go to Casey Middle, Manhattan Middle and Boulder High.

“There are a lot of people frustrated,” said Rebecca Landkammer, who has a fourth grader and a high schooler and lives off Sugarloaf. “These poor kids have no choice.”

One day this week, she said, the bus picked up her kids at 7:18 a.m., and her daughter sent her a text at 8:26 a.m. letting her know the bus had just reached the bottom of the canyon where cell service picked back up.

For the project, the 15-mile stretch of Colo. 119 will undergo $31 million-worth of construction to complete permanent repairs of damage to the road that was caused by the 2013 flood. Work is expected to be complete in fall 2020. Federal disaster recovery funding is covering $12 million of the cost, according to CDOT spokesman Jared Fiel.

Boulder Canyon has been closed from 10 a.m. to 2 p.m. daily for blasting. The blasting is scheduled to finish this month, Fiel said, and the traffic delays should ease.

He said morning delays were worse early this week because of a combination of workers paving and erecting a barrier to catch rocks and debris from the blasting.

“Blasting is the biggest impact to traffic we will have for this project,” he said, adding that delays for school buses also should be shorter next week.

Boulder Valley spokesman Randy Barber said the district is working with CDOT to try to minimize the delays. To make sure students make it to school on time, the bus is now picking them up 10 minutes early.

The bus, which carries about 30 students, typically takes about 40 minutes from the first stop in the foothills to arrive in Boulder, Barber said. With the construction, students were generally expected to spend about an extra 15 minutes on the bus, he said.

While the time of the bus ride depends on where students live along the route, he said, times are getting shorter. The average time a student spent on that bus on Wednesday was 48 minutes, while Thursday’s average was 38 minutes.

Along with their concern about longer ride times, parents said not knowing when the bus will make it back in the afternoon is making it difficult to schedule after-school activities and appointments.

“It’s been so frustrating,” said Autumn Whalen, who has a high schooler, middle schooler and two elementary school students. “You can’t plan anything. Our entire day revolves around this project. All of us have been very patient and understanding that they need to do construction. But now our kids are spending over an hour on this hot, miserable bus.”

Landkammer said another concern is if there are delays in reopening the road after 2 p.m., as happened earlier this summer, potentially stranding students in Boulder.

“I’m not sure what the alternate plan is,” she said.

Barber said the district has alternate routes ready in case of road closures. The alternate route for the Sugarloaf bus, he added, typically takes about an hour and 20 minutes.

“We understand that this is a frustrating situation for students and families,” he said. “We’re working with CDOT to make sure students get to school safely and as soon as possible.”