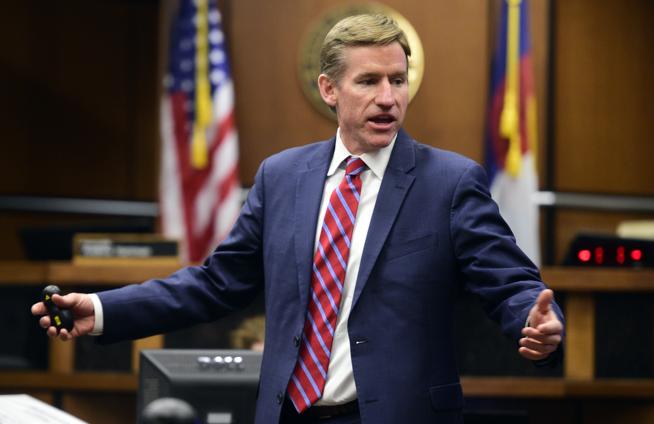 When it comes to combating racial inequities in Boulder County’s criminal justice system, District Attorney Michael Dougherty said he believes there is work to be done.

“Boulder County is a wonderful place and a lot of good work (has been) done over the years, (but there’s) a lot more work we need to do,” he said.

This week, Dougherty sought to take a step in addressing those issues and joined fellow prosecutors and law enforcement leaders in a conference to address racial inequality in the justice system.

The meetings, which took place in Montgomery, Ala. and Atlanta, were hosted by Fair and Just Prosecution — a nonprofit organization with the mission of connecting newly elected prosecutors with educational opportunities that promote fairness and compassion in the justice system.

The meetings were titled, “Our Nation’s History of Racial Injustice — Connecting the Dots to Mass Incarceration and the Role of the Elected Prosecutors in Addressing Racial Inequalities.” The second meeting was titled “In the Interest of Justice: Forking Alliances Between Reform-Minded Prosecutors and Law Enforcement Leaders.”

Dougherty described the trip as “powerful and informative.”

“One in three black men will be incarcerated in the U.S. versus one in 17 white men. Prosecutors are a driver of these disparate statistics,” O’Connor said via email Wednesday. “Prosecutors, as a driver of the racial inequities in incarceration, must absolutely confront their roles in exponential growth of mass incarceration, growth that inordinately affect people of color.”

Locally, O’Connor cited Boulder Police Department data, which indicated black people are twice as likely to be stopped at the discretion of a police officer than white people.

That 2018 data for the police department was released not long after the department’s actions garnered national attention following incidents involving Sammie Lawrence and Zayd Atkinson, two black men who were separately seen being sternly confronted by police officers while seemingly committing no crimes. However, the city sought an independent review of both incidents.

A review of the incident involving Atkinson, a Naropa University student who was confronted by police while picking up trash outside of student housing, was conducted by former U.S. Attorney Bob Troyer along with Michael Rankin and Robert Evans, both of Bluestone Investigative and Risk Solutions. In their report, the investigators backed the findings of the Boulder Police Department internal affairs investigation that found no evidence of racial profiling.

In the second incident, the independent review concluded Boulder police were justified in choosing not to initiate an internal review of the take down and arrest of Lawrence while he was filming a police interaction between officers and some homeless people in April.

In the wake of the incidents, Boulder created task force charged with examining models for a police oversight board.

Dougherty said criminal justice reform is been among his  goals as prosecutor. While the trip was a first-time opportunity for him, it is part of a continuing effort to try and address issues. In June, he said staff received implicit bias training. Additionally, before the end of this year, Dougherty said an outside independent entity is planned to review charging and sentencing data to determine if race and gender influenced those decisions.

He also shared his findings from this week’s conference at a Prison Population Management Committee — a legislative committee at the state Capitol.

“(We) continue to take every step we can to ensure (the DA’S) office is a leader in addressing racial inequities and bias in the criminal justice system,” Dougherty said.

Dougherty has served as a prosecutor for more than 20 years. Last year, he was selected by Gov. John Hickenlooper to serve as an interim district attorney for Boulder County. He later won the Democratic primary for the role DA against opponent Mike Foote. He did not face a Republican challenger.