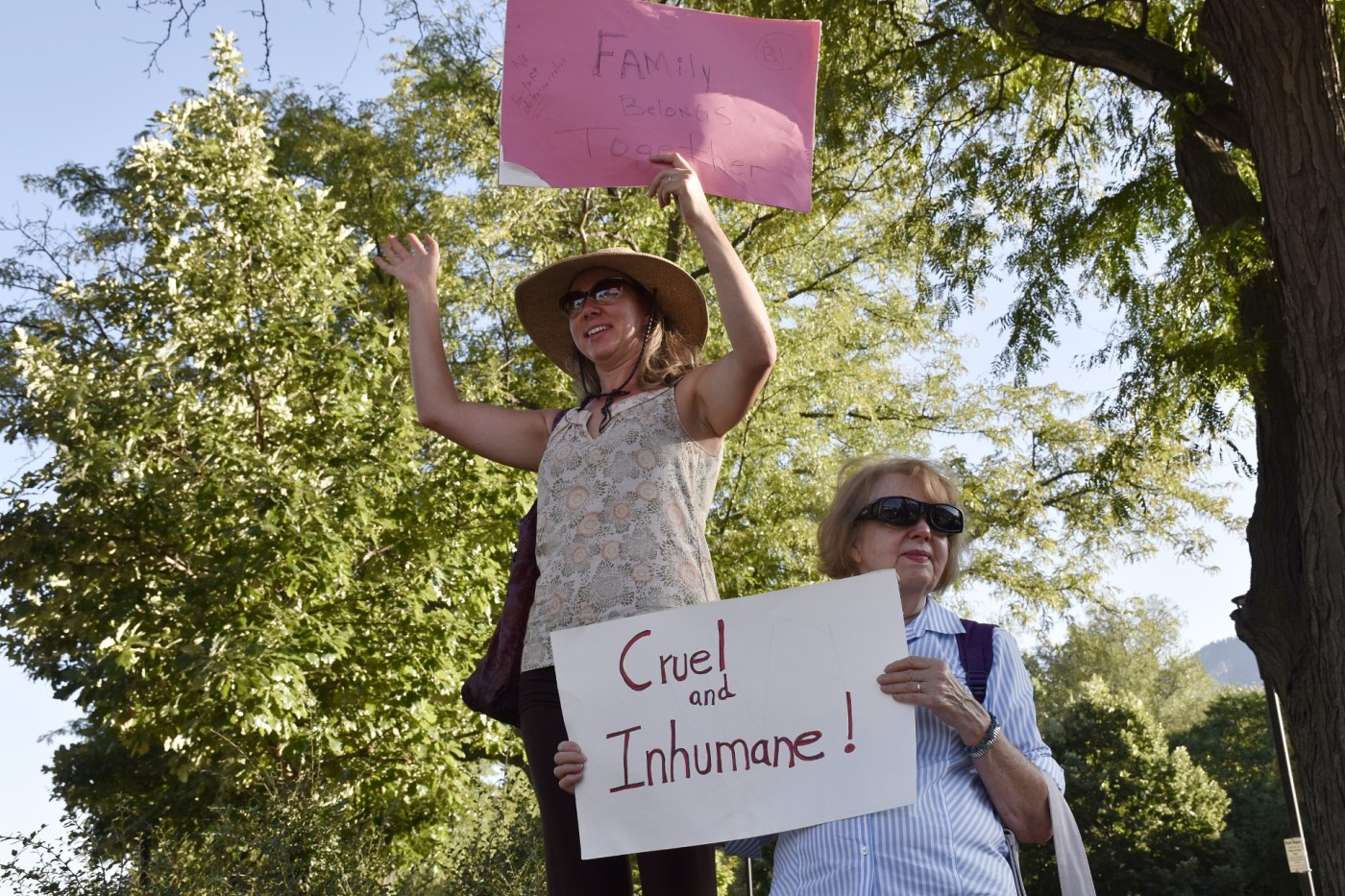 Friday evening at the intersection of Canyon Boulevard and Broadway, car horns blared, punctuating the air with a loud blast every couple of minutes  — and not because of rush hour traffic.

The noise from passing vehicles was likely an indication of support for people rallying at the intersection’s corner for National Indivisible Week of Action to Defund Hate. The rally was organized by Indivisible, a group advocating for human rights, in an effort to speak out against funding for U.S. Immigration and Customs Enforcement and U.S. Customs and Border Protection.

Roughly a dozen people held signs at the corner of Canyon, which was one of nine locations where people gathered along Broadway in Boulder. Similar rallies were held across Colorado on Friday, including in Aurora, Denver, Pueblo and Salida, to name a few.

Kenneth Nova, of Boulder, was among those who spent their Friday evening protesting. As traffic sped by, he held up a sign that read “Melt ICE. Defund Hate.”

“I think this is a great corner to do something like this,” Nova said. “It’s kind of the heart of Boulder. With traffic at this hour, there are lots of people.”

With Congress having returned to session on Monday, Nova said he wanted to speak out, encouraging U.S. leaders to defund or cut back on spending for Immigration and Customs Enforcement and Customs and Border Protection in the next budget cycle.

“We are just totally opposed to the Trump policies that are happening now our southern border,” Nova said. “The family separation has been hideous. Just the overall treatment of (immigrants) throwing people in these terrible situation — it’s just not right.”

A woman whose husband was deported to Mexico in May also rallied at the corner Friday. She asked to remain anonymous in an effort to protect her family’s identity.

The woman said her husband lived in the United States for 18 years and was undocumented when he was deported. In 2017, she said he started working to obtain legal citizenship, but the process was long and difficult.

“It’s been so tough for us,” she said. “For this to happen now and my children not to be able to see their dad, it’s tough and it should stop.”

By rallying, she said she hoped to open people’s eyes and hearts.

“Things people vote for (it may feel) like signing a piece of paper, but this is real life. It’s affecting families,” she said.  “My husband spent nine months in jail. There were days we didn’t know where he was. (I want people to) understand that you are affecting people’s lives, real people: husbands, brothers, mothers, children.”

Not far from where the woman stood, Boulder resident Katie Farnan, a member of Indivisible, wanted people to be aware that a Boulder County company is receiving Immigration and Customs Enforcement funding for its operations.

BI Inc., headquartered in Gunbarrel, has fulfilled federal immigration contracts and runs ICE’s Intensive Supervision Appearance Program. The program is described as an alternative to detention for some migrants and asylum seekers. It requires people to wear ankle monitors and undergo various surveillance and unannounced home visits.

“Boulder is not insulated from this entire international crisis,” Farnan said. “Boulder is complicit as well. We need more people here in Boulder to speak up.”

Boulder last month directed the police department to stop offering services to BI came after community members raised concerns about whether the company had any contracts with the city. The city barred the company from paying for off-duty police officers to make extra patrols at its offices. But by month’s end the city reversed course and the service was reinstated, after a recommendation it do so from now-retired Police Chief Greg Testa.

When asked to respond to Friday’s protests Alethea Smock, a spokesperson for the Denver Immigration and Customs Enforcement office, said the organization respects peoples’ constitutional right to express their opinions and the agency would continue its operations, consistent with federal law.

“Federal law requires (Enforcement and Removal Operations to) detain certain individuals as their immigration proceedings progress,” Smock said in an email. “If so ordered, ERO is responsible for removing the individual from the United States.”

According to Smock, the number of people booked into an ICE detention facility in 2018 was 396,448 — a 22.5% increase compared to 2017. Detention resulting from Customs and Border Protection actions also saw an increase: 32% compared to the previous year. Smock said this illustrates “a surge in illegal border crossings.”

As for the number of people honking their car horns Friday evening, Farnan said while it was great to hear support, what she hoped to see from Friday night’s rally was action.

She encouraged people to write to city council members or U.S. leaders to share their concerns.

“We can’t just drive by and continue on. We can and we do, but we need to stop and actually do something,” Farnan said. “The private prison structure is not going to disassemble itself.”