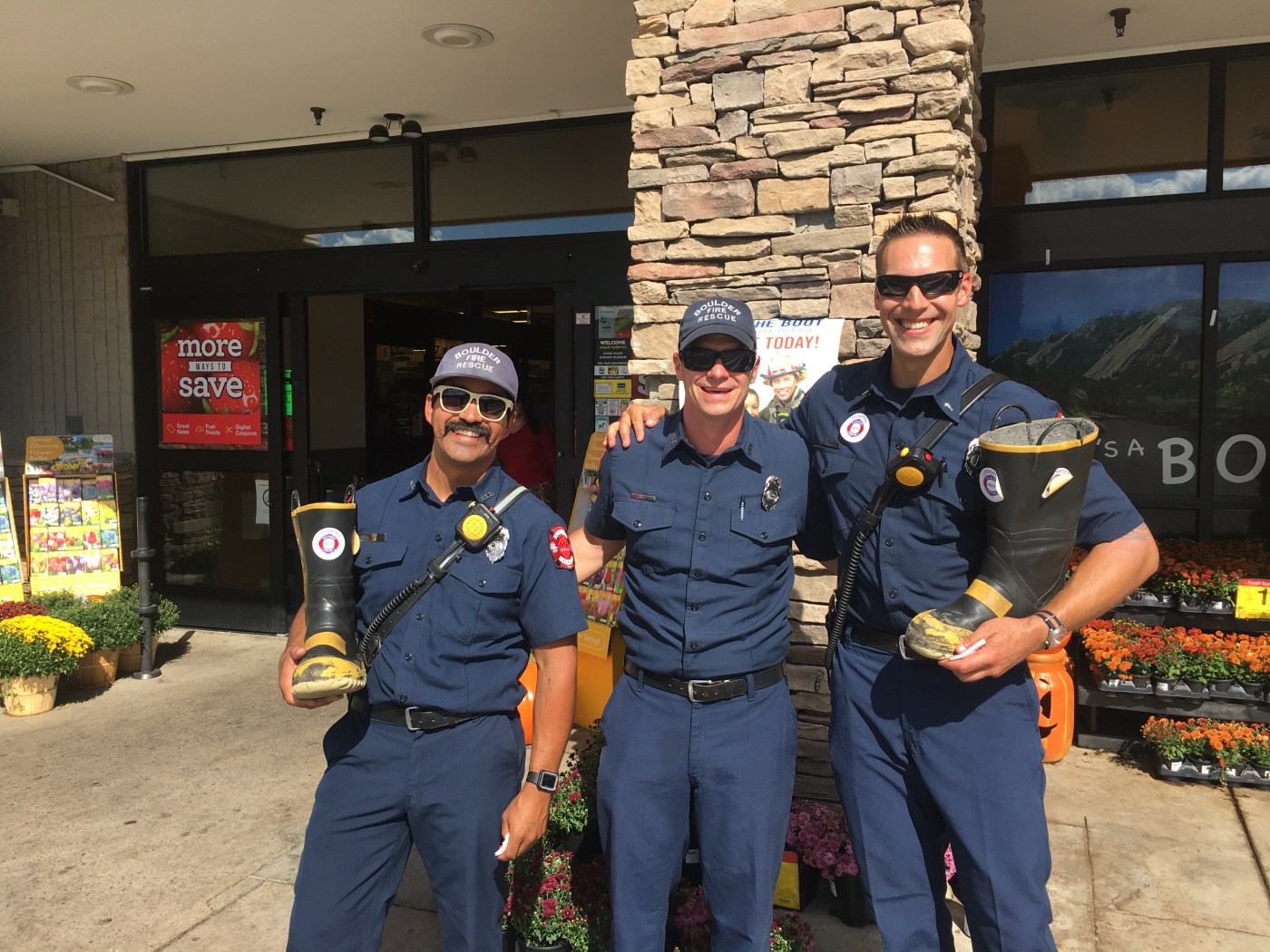 Next year’s Boulder Fire-Rescue firefighters will have some pretty big boots to fill.

This Labor Day weekend firefighters raised $11,425 for the Muscular Dystrophy Association during the annual Fill the Boot fundraiser.

Fire Lt. Tyler Capron, a member of the Boulder Firefighters Local 900, the firefighters’ union, said he expects the amount raised to be at least $12,000 as funds continue to be tallied.

Capron said the amount raised is not a record for the department. However, this year for the first-time, he said all of the station’s roughly 50 firefighters were able to participate.

“It’s nice to see  (the money go) toward the families in our community as well as nationally for research and medications,” Capron said. “It’s pretty cool to see and I’m proud of everyone I work with. No one had to go out, it was not a mandatory thing. I think a lot of that comes from the type of people we work with, they want to give back.”

Huge THANK YOU to everyone in our community that supported our efforts to Fill the Boot. We were able to raise $11,425.05 for the Muscular Dystrophy Association! Every penny collected will be used for research, cures and treatment. pic.twitter.com/6pvRpPeamW

As the name of the fundraiser indicates, firefighters encourage people to drop money into one of their boots. This year, from Friday to Monday, Boulder Fire Rescue firefighters were stationed outside of stores across Boulder to collect funds.

Firefighters got extra crafty with their efforts this year and partnered with Upslope Brewing Company to raise funds. Last month, the microbrewery created a cans with the MDA logo and donated $2 for every six pack sold. The company also donated a portion of their sales for a selected day to the cause. Capron said the brew was so popular that it sold out in a day.

Capron said it is a tradition for local firefighters across the nation to raise money to fight the disease in September. Sixty-five years ago, a firefighter in Boston decided to raise money for the MDA to support a child in his neighborhood. This act of kindness started a tradition that lead the International Association of Firefighters to adopt MDA as their charity of choice more than 60 years ago, according to Capron.

Muscular dystrophy is a genetic disease that causes muscles to become progressively weaker. The Muscular Dystrophy Association researches neuromuscular diseases and provides clinical care and support to patients and their families.

“A lot of (the money raised) goes toward research, toward helping out kids and families with wheelchairs (get) transportation,” Capron said, “so they can have better lives without having to place a huge burden on the family.”

A number of Boulder County fire stations hosted their own events or collections for MDA . Some fire stations also have fundraisers in the works. Longmont firefighters will host their own Fill the Boot events. On Sept. 14 firefighters will collect money throughout the day outside of the King Sooper’s, 995 S. Hover. They will continue to collect funds between 4 and 9 p.m. Sept. 20 at Collision Brewing, 1436 Skyway Dr.