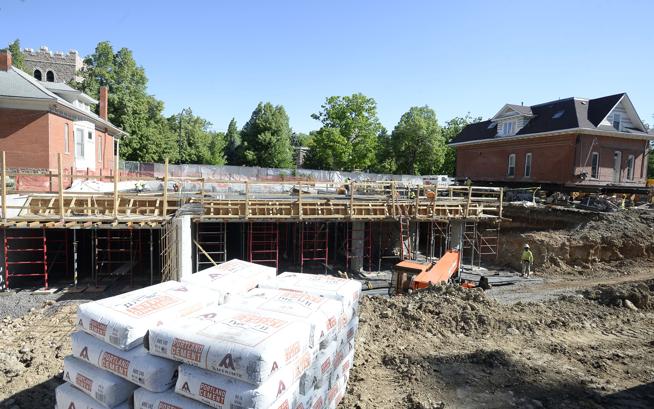 Gaining city approval to build four- and five-story structures in Boulder may soon become more expensive for developers. But they might be given more certainty of prevailing when pursuing such projects.

The Boulder Planning Board on Thursday moved forward a city policy meant to boost the burden on developers seeking to exceed maximum building heights by requiring larger affordable housing fees in order to grant exceptions.

City staff proposed allowing taller buildings in eight areas of Boulder, up to five stories totaling no more than 55 feet, with the provision of developer-financed trade-offs to benefit the city’s affordable housing funds. Such trade-offs would vary depending on the type of development.

The eight areas city staff targeted for the changes include sections of downtown, University Hill, 29th Street Mall, Boulder Junction, Gunbarrel, a small block on north Broadway, a block west of Foothills Parkway just south of Baseline Road and an area on the north side of Arapahoe Avenue just east of Foothills.

Those areas were the only parts of Boulder in which requests for height limit exemptions on development projects were allowed following a 2015 temporary ban in most cases on buildings taller than 38 feet. That ban is still in effect.

Two out of the four Planning Board members present, Bryan Bowen and Harmon Zuckerman, were in favor of allowing height exceptions beyond those eight designated areas. Sarah Silver was against letting the new building height exemption requirements apply throughout the entire city, or in more areas than those eight, while Lupita Montoya’s stance was less clear, showing some support for growing the scope of the rule’s impact.

Bowen and Zuckerman claimed the eight areas where building height exemptions remained available were arbitrarily selected, and were the sites of in-process development projects at the time the ban on taller structures was put in place.

The board requested city council direct staff to identify where throughout Boulder taller buildings would be compatible with their surroundings and have the new rules, when complete, apply to those areas as well.

Under current rules, developments that dedicate 40% or more units as affordable housing can gain height exemptions anywhere in Boulder. The Attention Homes project under construction at 1440 Pine St. aimed at keeping chronically homeless young people off the street with 40 permanently supportive housing units was granted an exemption of several feet in height, although it is only three stories.

The staff proposal would allow buildings to exceed zoning district height limits by increasing the amount for affordable housing paid to the city from 25% to 36% of the number the market-rate housing units. But the higher fee amount would only apply to the “bonus floor area,” or the units created by adding fourth and fifth stories.

For non-residential developments, the proposal calls for the bonus area of a project to be subject to a 43% increase of the city’s commercial linkage fee that goes toward affordable housing. The standard commercial linkage fee is set to jump to $30 per square foot of office space in 2021, and would increase to $43 per square foot for office floor area above the height limits under the proposal as it is currently written.

Those larger fee amounts on housing units and floor area above height limits in a given zoning district were within a range city-hired consultant KMA calculated as financially feasible for developers.

“Findings regarding the additional office commercial linkage fee supported by bonus floor area are extremely sensitive to variation in office rents,” KMA stated in its report. “… Utilization of the community benefits program (for added height) may vary significantly based on market conditions.”

For-sale housing projects using greater affordable housing provisions to obtain height limit exceptions would have to build half of their obligation as on-site affordable units, instead of paying the city cash in lieu.

Adding in a set of affordable housing conditions developers can meet to gain exceptions to height limits is meant to mitigate the perceived hazard of entering the city’s site review process required for such exceptions. Losing out on costs of drawing taller building proposals sometimes prevents them from even trying to get a variance.

“One factor that is perceived to increase the risk of height bonus projects is the site review process,” KMA stated. “To compensate for this additional risk, developers expect to earn a return that is significantly greater than what can be achieved with a by-right project.”

With the exception conditions prescribed by city staff, “developers would potentially reduce their return expectations,” KMA said, which could boost the value of public benefit generated by the height bonus, as well as the use frequency of the program.

City council earlier this year instructed staff to use affordable housing as the only community benefit that could result in a building height increase, with the intent of in the future drafting rules that would allow other developer trade-offs, such as providing community space for arts uses or publicly accessible open space, that could result in more dense development further down the road.

The Planning Board failed to reach a consensus on making a recommendation to council, with Montoya voting down a lengthy motion crafted by Bowen over the last hour of the meeting. All four board members present needed to support a motion for it to pass with the other three members absent.

Council on Oct. 1 is set for a first reading of staff’s draft of the affordable housing requirements in exchange for more building height.