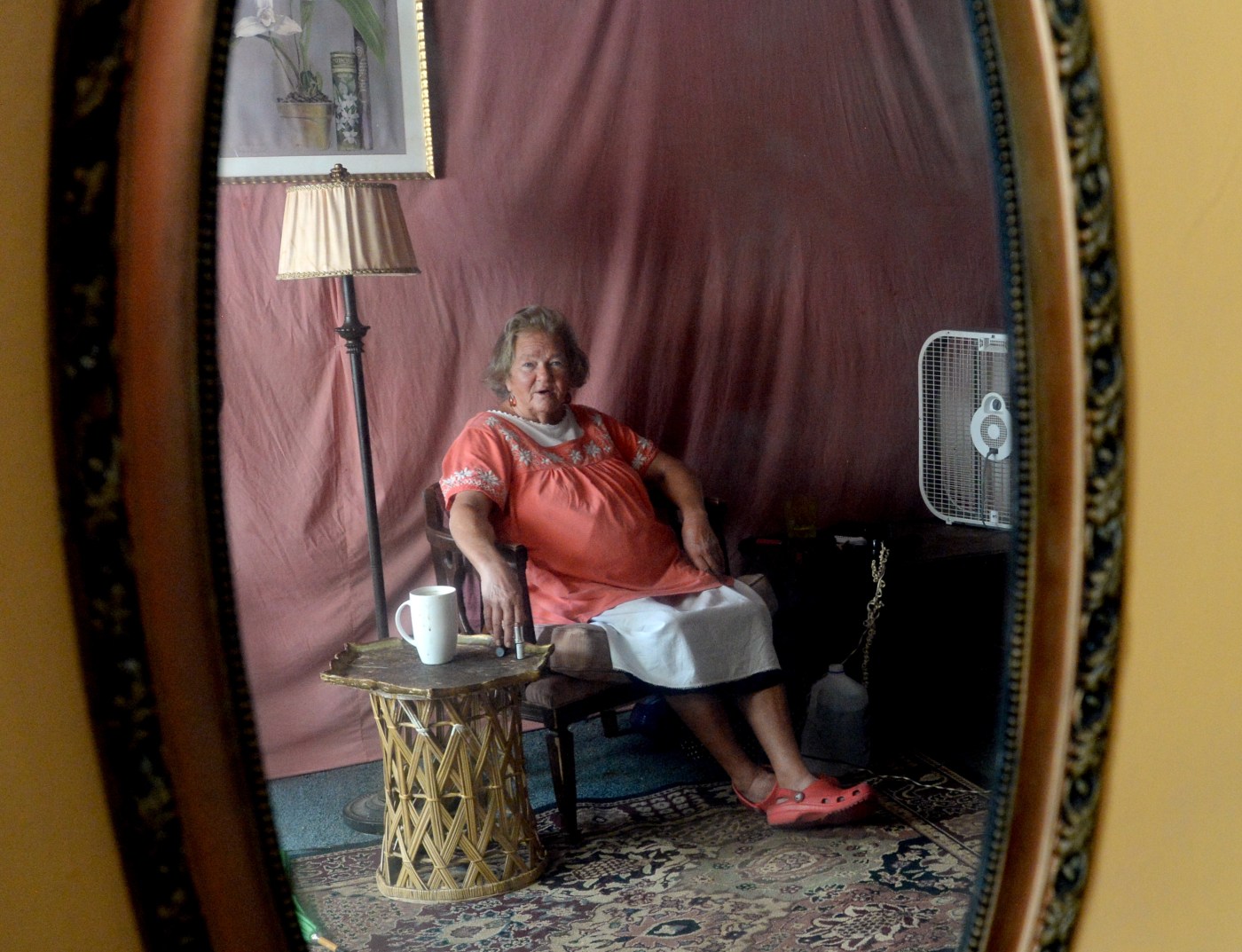 Waiting for the results of a test for methamphetamine contamination on samples taken from her Boulder Housing Partners-operated Glen Willow apartment in the 300 block of Pearl Street left her worried.

Even when she learned Thursday the results showed no contamination in samples from her unit, Kintzing remained on edge, feeling like more thorough testing might  be necessary to uncover what she suspects: Her body for months has been exposed to meth coming from the apartment below hers.

For a year and nine months, Kintzing said, she endured living directly above a unit whose tenants were attracting meth users, and since at least October, according to Boulder police records, it was used as a crash pad for homeless residents and a chop shop for stolen bicycles.

The apartment below Kintzing — who reported her monthly income at about $800 — has been left heavily contaminated and earlier this month was deemed uninhabitable by city inspectors because of the drug. The problematic tenants also were evicted this month.

It is one of three dwellings in Boulder — all of them income-restricted — currently unsuitable to live in because of meth residue, according to Boulder Housing Partners and city spokeswoman Meghan Wilson.

Two of them are Boulder Housing Partners units, with the other at Tantra Lake Apartments, 1000 W. Morehead Circle. The third is at Lumine Apartments, 2665 28th St., managed by Boulder-based affordable housing provider Thistle, Wilson said.

Meth has made a documented resurgence in popularity in the area; Boulder County Public Health since April has officially cleared cleanup efforts on eight properties throughout the county, agency spokeswoman Chana Goussetis said. Officials also are awaiting results of “preliminary assessments” of units on 10 properties, including four in Boulder, four in Longmont and two in Louisville.

Longmont Housing Authority paid about $130,000 to rid 12 income-restricted units of meth contamination discovered since 2018, with its final unit at Aspen Meadows nearing completion, according to Megan Herrera with Colorado Housing Finance Authority, the agency that allocates low-income housing tax credits to affordable housing providers throughout the state.

Herrera said her agency is unaware of any other tax credit-supported properties in the state currently uninhabitable due to meth contamination, but it had no knowledge of the Boulder Housing Partners units affected until a Daily Camera inquiry into the situation.

Neither of the Boulder Housing Partners properties currently out of commission had meth manufactured in them, said Joanna Wittig, spokesperson for the landlord. A city inspector said no other units at Glen Willow are affected by the drug, but samples at Tantra Lakes showed its presence also in a hallway near the contaminated unit, while tests of an adjacent unit were negative, according to Wittig.

Boulder Housing Partners estimates bringing the Glen Willow unit back up to par will cost $15,000, while it is still procuring costs for remediation at Tantra Lakes, Wittig said.

Despite such stated efforts of the housing agency, Kintzing is upset Boulder Housing Partners took as long as it did to eradicate the problem. As she waited for the situation to be addressed, she started writing her grievances on notebook paper and posting them on the wall outside her second-story apartment. One of which calls Boulder Housing Partners “spineless wimps.”

Kintzing said she raised concerns about drug use by her former downstairs neighbors about two weeks after they moved in almost two years ago, and Boulder police records show officers arrested a man in possession of presumed methamphetamine just outside the unit as early as October 2018. There were several more incidents of police activity there in the following months, including this spring.

“Everyone around here pretended not to see it,” said Kintzing, who suspects she fell ill from meth exposure at one point. “I really got tired of their political correctness. This has really almost killed me mentally, physically and spiritually.”

She lived in the Glen Willow community for 20 years before a five-year stint at Canyon Pointe, another Boulder Housing Partners property, before moving back to her current Glen Willow apartment in 2006, and the experience with the neighbors using meth with others from outside the neighborhood was among the most distressing of her life, she said.

Police alerted Boulder Housing Partners staff of the drug activity in the Glen Willow unit, a Dec. 26 police report shows, but an officer wrote the property manager said she had “written (the tenant) up for violations in the past,” in the wake of which the tenant ceased the behavior, making eviction impossible, only late to resume the later. The manager added that Boulder Housing Partners follows the U.S. Department of Housing and Urban Development’s policies on evictions.

Testing for meth contamination is only required of a landlord if a police report documents the drug’s presence in a dwelling, but that regulatory structure has loopholes, said Mike Ciccotti, a senior environmental scientist with Lakewood-based EnviroSpec, the firm hired for meth testing by Boulder Housing Partners. He used someone getting pulled over with meth in the car failing to trigger a mandated test of the suspect’s home as an example. Units adjacent to contaminated homes only have to be tested if they share interior air duct systems, or if an area outside a dwelling, such as a hallway, also tests positive for remnants of the highly addictive drug, Ciccotti said.

“The regulations are pretty strict right now as far as the cleanup level. It could be a little stricter as far as when you need to test,” Ciccotti said, highlighting that remediation, which can be expensive, is only legally required after a positive test. “If I’m smoking meth in my car, I’m probably smoking it in my apartment, too.”

Over the past two years, Ciccotti said his firm has seen a surge in requests for meth testing at homes up and down the Front Range.

“There’s a big meth problem and it’s getting worse,” he said.

He advises landlords with tenants possibly using meth to confront the problem instead of ignoring it to save a buck in the short-term.

“Do what Boulder Housing is doing and get ahead of it,” Ciccotti said. “It’s not their fault someone is smoking meth in their units, but they’re doing right by cleaning up for the next person.”