Boulder starting work on Foothills Parkway underpass; trees will be removed, pruned for safety on Thursday 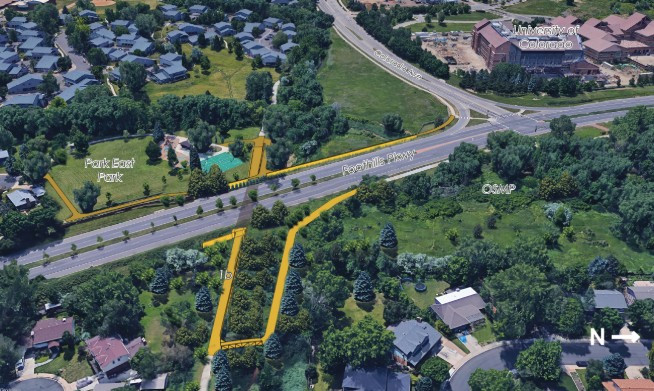 Boulder next week will start work on a $4.4 million project to build a pedestrian and cyclist underpass crossing of Foothills Parkway connecting Colorado Avenue to the Centennial Path.

The new infrastructure will replace the existing bridge in the area, which is at the end of its service life and does not meet Americans with Disability Act or bike facility guidelines for accessibility and design, a city news release stated.

Park East Park will remain open during construction, but intermittent disruptions may occur to adjacent bicycle and pedestrian paths while new sidewalks are being installed on the park’s south side and Colorado Avenue side, the news release stated.

Vehicular traffic will be minimally impacted, with plans to keep four lanes of Foothills open in the area. Traffic will be shifted to the east side during the first phase of construction, but occasional off-peak lane closures will occur, the release stated. The posted speed limit in the construction area will be reduced to 30 mph to maintain worker safety and public safety.

The city on Thursday will have to remove three trees and prune 33 more in the center median on Foothills between Table Mesa Drive and Baseline Road to mitigate safety issues, the release stated.

Similar to the underpass project, all four lanes of Foothills will remain open and be shifted to accommodate the tree crews and equipment, the release said. No lane closures are expected, but the work along public rights-of-way may requirement temporary lane realignment.

For more information about the Foothills Parkway Bike and Pedestrian Underpass project visit bit.ly/2lTOydX or contact Noreen Walsh at 303-441-4301.