Can Digital Gold overthrow the OG store of value, Gold and reign supreme?


Bitcoin’s value was borne out of its limited supply (just like Gold) of 21 million, hence the world’s oldest cryptocurrency is often touted as “digital gold”.

When Bitcoin was first conceived in 2008, the world witnessed a myriad of naysayers dismissing the tech and currency, while the optimistic rooted for the crypto-asset to pave the way for a new economic revolution that has not seen the light of the day since the discovery of gold.

However, Bitcoin has rarely mimicked the price trend of gold. The following chart suggested an inverse relationship with gold, which rallied during the same time when Bitcoin recorded a market drop, specifically during August and November last year, and most recently in May 2019.

Bitcoin has always been stood up to the legacy financial system. In a recent tweet, Dan Held, the Co-Founder & Director of BD at Interchange tweeted,

“Gold has an $8 trillion market cap with zero merchant adoption. So why do does the mainstream press think Bitcoin can only have value if it’s used for coffee Payments?”

A well-known figure of the BSV community, Eli Afram responded saying “Gold has very strong utility” than being used as a “currency”. He also said that Bitcoin got its initial value from its ability to be used in commerce. Afram believes that gold meets the criteria of being valuable by virtue of its scarcity and utility attributes.

The fundamental use case of gold across the globe is undoubtedly jewelry. Though limited, the precious metal has use cases beyond the normal bling and across different industries, such as the manufacture of electronics, computers, dentistry. 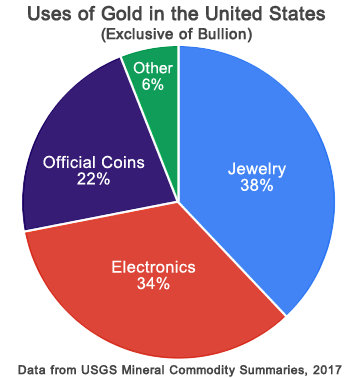 During the era of Gold Standard in the 1800s in countries like England, France, Germany, the US, Switzerland, Belgium, the value of the national currencies were pegged to a specified amount of gold. Gold needed government control over rationing spending. Governments would spend more than what their gold reserves could support and there were no restraints on the supply of national currencies. The gold monetary system was finally abandoned by the US in 1933 because the lawmakers felt that the spiraling economy during the Great Depression could not have been saved without Dollar severing ties with gold.

A conversion to gold in the current scenario would not be easy considering the complex nature of the economy. Also, the supply of gold is unreliable. Another noteworthy factor is that for gold to be linked to Dollar that is in circulation now, its prices would have to rise exorbitantly, which would eventually give rise to massive inflation.

Bitcoin is not issued by any single entity and its open nature has contributed to its popularity. In terms of transferring money, Bitcoin provides a fast, secure and immutable channel over the Internet. Bitcoin has been long touted as a “store of value” than its utility as a medium of exchange. It is important to note that if Bitcoin is not a good medium of exchange, it means that it does not have a fundamental value. And an asset with a bad fundamental value cannot be a good “store of value”.

A switch from the current financial establishments to Gold has been strongly advocated even now. And the proponents of the digital coin have longed for Bitcoin to become a superior alternative to the payment providers.

Since the creation of the Federal Reserve in 1913, the US Dollar has lost more than 95% of its value. And the case of Venezuelan Bolivar is an extreme one, which has paved the way for crypto to be leveraged for the purpose of payments.

The biggest question that remains to be answered is whether the masses would want a medium of exchange that is backed by the government. Since Gold failed, should Bitcoin be embraced as the new medium of exchange?