Caught in a Hayes: BitMEX volume drops post-CFTC investigation; who will pick up the Futures gauntlet?

Previous Next
Caught in a Hayes: BitMEX volume drops post-CFTC investigation; who will pick up the Futures gauntlet?


Bitcoin Futures are caught in a haze, and not one that will please Arthur Hayes.

Ask yourself, if you were BitMEX in a cryptocurrency price market where the king coin is bouncing between four and five figure valuations, why would you be in the thick of the news cycle? An obvious answer would be due to volumes soaring sky high owing to traders capitalizing on the platform and its massive 100x leverage, and not because of a CFTC investigation.

Last week, the Seychelles-based Futures exchange was caught in a fit of trouble after the United States Commodity Futures Trading Commission [CFTC] opened an investigation into the exchange. The issue at hand was whether the exchange, by allowing American customers on its platform, violated any rules that govern futures cryptocurrency exchanges.

What’s interesting is that the news was brought to light not because of an insider scoop, a drawn-out regulatory assignment or a piece of investigative journalism [trust me, if it was, I’d be taking the credit], but rather by a bespectacled, tenured, brashly outspoken professor, Nouriel Roubini aka Dr. Doom.

In what was built up to be the biggest showdown of the year, Roubini clashed with BitMEX CEO Arthur Hayes in the ‘Tangle in Taipei.’ Following the “debate” which had more cuss-words than an episode of Jersey Shore, the aftermath drew in the CFTC. No sooner had the professor departed the stage at the Asia Blockchain Summit, did he initiate a tirade of attacks on BitMEX’s business model and the exchange’s crafty maneuvering of regulations.

Roubini stated that US investors cannot conduct trades offered by BitMEX citing regulations. However, he added, “anyone with [a] VPN can avoid the IP and go and do investments with you guys [BitMEX].”

Despite many in the Crypto-Twitter world blocking off Roubini’s remarks, one official at the CFTC did pay attention and decided to pursue an investigation into it, leading to an epic drop in Bitcoin Futures volume on the exchange. Ironic, isn’t it? 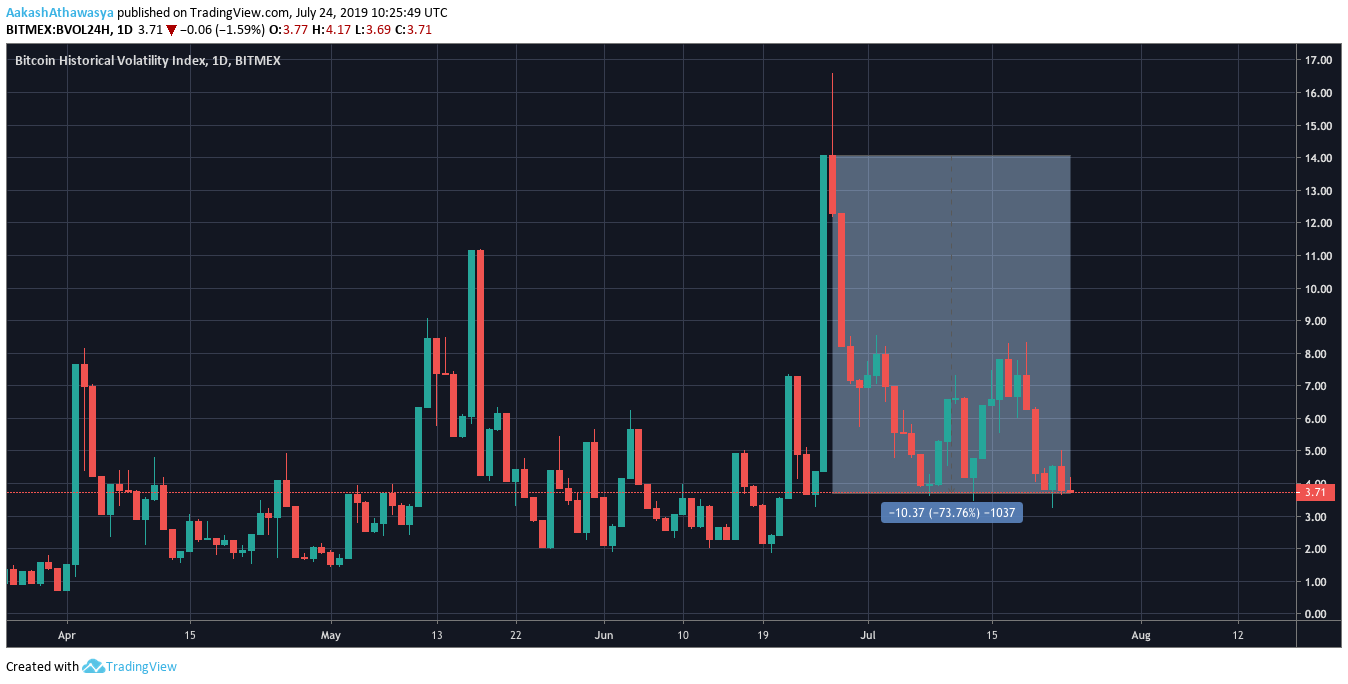 BitMEX recorded a whopping 73.19 percent drop in Bitcoin Historical Volatility Index [BVOL] on a 24-hour basis from 27 June to press time. As Bitcoin dropped by 17.64 percent from 27 June to 30 June, the BVOL saw an over 50 percent decline in value, prior to the debate between Roubini and Hayes.

While the debate and the drama around the same set Twitter alight, the volumes and volatility further dropped by 50.57 percent. Despite an increase prior to the CFTC hearing, the BVOL took a prominent dip once the news regarding the CFTC investigation surfaced.

Several top analysts weighed in on the BitMEX ‘REKT’ ordeal.

Joe McCann, Chairman at Nodesource, summed up the [then] 33 percent drop as a ‘fall off a cliff.’ He tweeted,

Vol has fallen off a cliff.
Down 33% today alone on Bitmex.#bitcoin pic.twitter.com/PO1V0wMWDf

A myopic view would suggest that BitMEX’s volume has fallen drastically since the investigation began. On closer inspection however, the effect is not as pronounced. Certainly not as much as their spot equivalent.

Wave Financial’s Avi Felman charted out the volumes, post the CFTC news, of BitMEX against the spot markets of Coinbase and Bitfinex. According to the analysis, Coinbase bore the brunt of the loss, totaling a drop of 54 percent while BitMEX and Bitfinex fell by 37 percent and 51 percent, respectively. The analyst charted,

Here is a chart for those more visually inclined. Either Bitmex has led the market down, or price gyrations have intimidated traders. But Bitmex actually hasn’t gone down as much as spot markets. https://t.co/HelS1zl55B pic.twitter.com/1n4EhwmQMP

Internally, whatever the state of BitMEX volumes, long positions are beating out short positions. According to DataMish, the expectation for the exchange’s traders is that BTC’s price is going to soar; over 77 percent of the trades are long while 22 percent are going expecting a drop.

To put that number into perspective, in the last 12 months, the magnitude of both long and short positions was between the 60 – 40 percent range, altering its path only post-June 30. Since 21 June, short positions in the BitMEX BTC market have dropped from over 29K to under 7K, while long positions held firm. Nonetheless, Bitcoin Futures volumes on the Futures exchange have been dropping.

If you are one of those people who are looking to make a move out of controversy-ridden BitMEX on the accusations of it being a “cesspool,” and operated by “retail suckers,” another Futures platform will have certainly caught your eye.

Less than a week after Arthur Hayes and BitMEX were packed to the rafters in accusations, Bakkt emerged. Timing is the key here, with the highly anticipated digital assets platform by the Intercontinental Exchange [ICE] announcing their test phase for Bitcoin Futures, just as BitMEX’s troubles rose. When Adam White put down July 22 as the launch of the test phase for the Futures product in his 13 June blogpost, little did he know the state of the Bitcoin Futures market.

To add on to the woes of the Bitcoin Futures market, CME, the regulated futures exchange, has been performing extremely badly this past month. With the Libra hearings not allowing Bitcoin bulls to break out of its slump, the CME XBT contracts volumes are in a fix. Since 27 June, the CME XBT volume has not risen above 12,000. To put that into perspective, between 26-27th June, over 55,000 contracts were traded.

Bitcoin Futures contracts are in a slump, owing to the price calamity that Bitcoin is enduring by dropping to four-figures and below its 50-day average. The question on the derivatives front remains. With CME volumes down, BitMEX locked in the CFTC investigation and Bakkt only entering a test phase, who will pick up the Bitcoin Futures gauntlet?