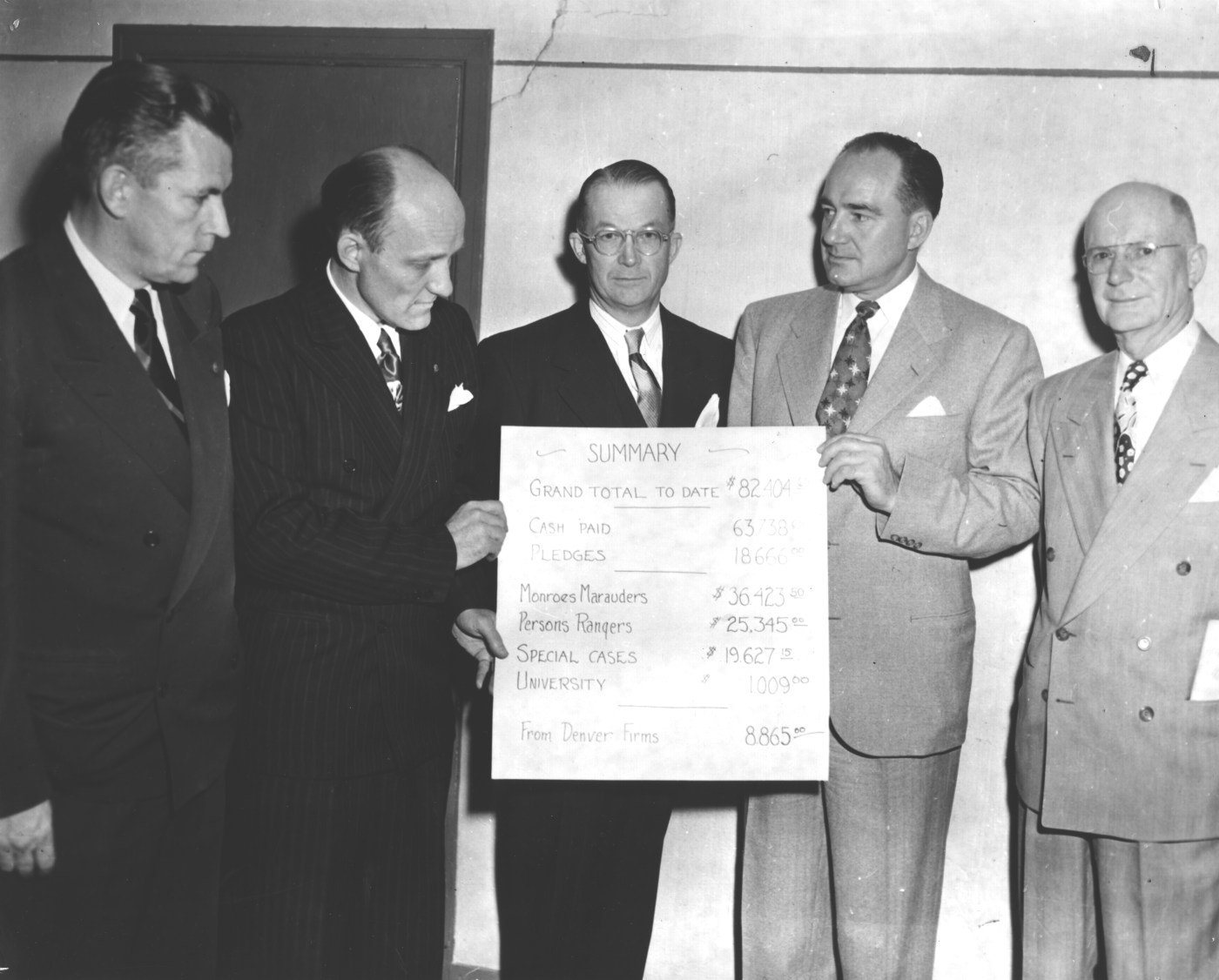 Note: This is the second in a two-part series on the efforts to bring the National Bureau of Standards Central Radio Propagation Laboratory to Boulder.

In the first part of this series, we learned that in December of 1949, Boulder was announced as the choice for the National Bureau of Standards new Central Radio Propagation Laboratory, beating out Palo Alto, California, and Charlottesville, Virginia.

Boulder Chamber of Commerce manager Franny Reich took the bold step of promising the U.S. government a site for the lab. The chamber had taken out an option to buy farmland just south of Boulder.

Now the chamber needed money to buy the land. Unlike its previous Esquire pilot project that brought the magazine’s subscription fulfillment offices to Boulder, and investors were paid back, this land would be a gift.

So the chamber created a drive for “Prosperity Insurance” to attract donations to purchase the 217 acres of land for the government.

With a carefully crafted campaign, the chamber ran a series of advertisements in the Daily Camera informing the public that the fundraising “zero hour” would begin on at  7:30 a.m. April 11, 1950. The enticing ads appealed to Boulder residents and small business owners who were concerned about economic futures:

“You probably now have health, accident and life insurance. You also probably have car insurance, fire insurance, wind insurance — perhaps hail, theft, public liability and other forms of insurance protection. But how about your business? Will you have the customers and clients next year you have now?…

Pay your share of the Prosperity Insurance Premium — Today!

The campaign was a resounding success. The chamber reached more than its goal of $70,000 (about $745,000 in today’s dollars) in just eight days.

The following week, the chamber took out a large celebratory ad:

On September 14, 1954, President Dwight D. Eisenhower came to Boulder to dedicate the lab in the courtyard of the new facility. Schools and businesses closed for the occasion. About 10,000 people attended the dedication and the Lowry Air Force Band played anthems like “Hail to the Chief” and “The Star-Spangled Banner.”

Following a tour of the new lab,  and after referencing the mining past of Colorado, Eisenhower said, “Here we have a new type of frontier.” At the closing of his speech, the president pushed a button that unveiled the cornerstone of the building and said, “It is my privilege to dedicate this facility of the Bureau of Standards to the welfare of humanity in America and throughout the world.” (The speech is available at the Carnegie Library for Local History, OH 1808.)

The lobby of the original NBS building the (National Institute of Standards and Technology Building 1) displays a plaque that lists all of the businesses and individuals who contributed funds for a quarter of an acre or more to the effort, including Sturtz and Copeland, Tulagi, Ideal Market and Perry Shoe Store. Even Western States Cutlery and Crockett Bit and Spur donated to the project.

The NBS lab brought new jobs and hundreds of scientists and their families to Boulder and spurred the new Martin Acres housing development as well as many new businesses.

All three of the forward-thinking Progress Campaign initiatives from the Boulder Chamber of Commerce in the late 1940s were successful. The Esquire subscription offices evolved into Neodata, which is arguably the beginning of “Big Tech” in Boulder. The first cars cruised on the turnpike in 1952, opening up the entire Front Range for business and tourism. The National Bureau of Standards Central Radio Propagation Laboratory was the first of several national science labs that would choose to locate in Boulder and change the character of the city forevermore.