Coinbase: Balaji Srinivasan may have been ousted from exchange, former CTO not given ‘enough freedom?’


Coinbase CTO Balaji Srinivasan shocked the cryptocurrency world by announcing that he would be leaving the cryptocurrency exchange on May 4. Despite the cordial terms of the departure voiced by himself and the exchange’s CEO Brian Armstrong, the exit might point to a telling tale of turmoil within the exchange.

According to a tweet by Pierre Rochard, the founder of Bitcoin Advisory, Srinivasan “had to leave” the cryptocurrency exchange. He added that the now ex-CTO was in course to “fix things,” which, presumably, triggered his departure.

Following the news of Srinivasan’s exit came to light, Rochard added that he was “not surprised.”

In an email exchange, posted via screenshot to Twitter, between Rochard and Niko Veatch, the Head of Crypto Recruiting at Coinbase, the ex-CTO had big plans for the exchange. The email detailed Balaji, in the process of launching a “SEAL team of crypto talent” at Coinbase. 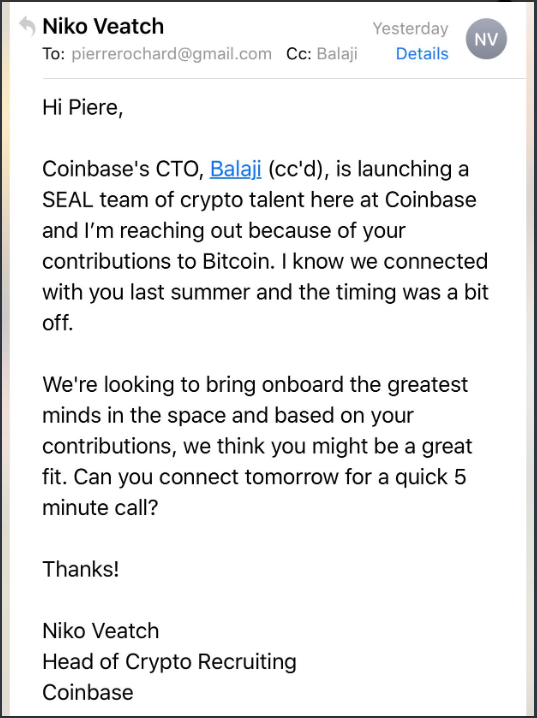 The email, which stated that Balaji was CC’ed in the thread, was in lieu of seeking Rochard’s talents for the team. Furthermore, the objective of the team was to “bring on board the greatest minds in the (crypto) space.”

Despite the aforementioned email exchange pointing to Srinivasan ‘s involuntary exit from Coinbase, the ex-CTO contended that his time at the exchange was “fun,” and “energizing.” In a tweet announcing his exit, Srinivasan stated that he wanted to take “a bit of time off to get back in shape.”

TheBlock, citing an anonymous source, reported that Srinivasan was not given “enough freedom within the company to operate independently and his differing visions for the future product roadmap,” eventually leading in his leaving Coinbase. However, nothing of this sort has been suggested by Coinbase or Srinivasan.