Indian poker site Adda52 is bidding to cement its position as the country’s top online operator and help the industry at large with the help of cricket icon Chris Gayle. 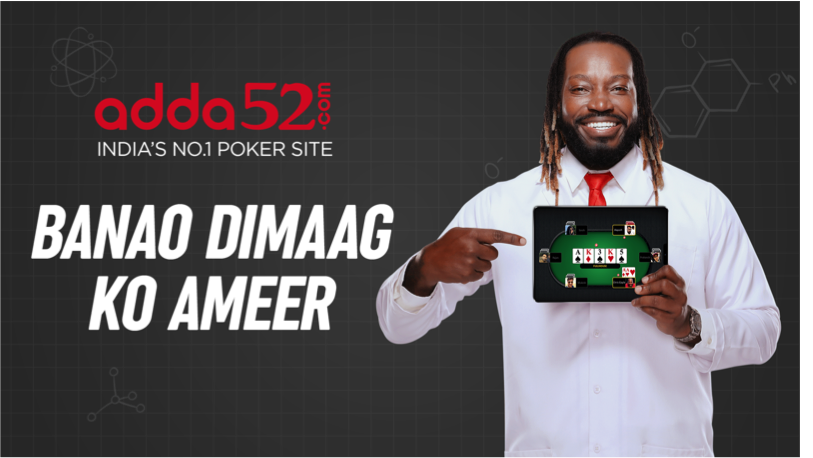 Piggybacking off of the sport’s popularity in India, a new advertising campaign will do more than promote Adda52.

The Mental Game of Indian Poker

Explaining the new PR push, CEO Naveen Goyal said the adverts will highlight the mental aspects of the game. To add more weight to the message, Gayle will act as the link between poker and sport.

“Poker is a game which stimulates the mind, helps one make quick decisions, pushes one to be calm and patient. These skills also get reflected in their life,” Goyal said in his press release.

While the adverts (see videos below) also play on the idea of using poker to make money, intelligence is the central theme.

For Indian poker operators, pushing the value of poker as a life endeavor has become a priority over the last three years. With each state having its own take on the game’s legality, advocates have emphasized that playing poker isn’t a gamble.

The latest ads om Adda52 are different. However, those behind it are aiming to push the message a step or two further.

By linking the adverts to a free-play promotion, the Indian poker site wants to attract new players from “all walks of life.”

The overriding message is that poker can improve someone’s critical thinking skills, which, in turn, will help them in life and business.

As the most popular sport in the country, cricket reaches an audience of millions and Adda52 is banking on that to improve its position as India’s most active site.

However, with the current crop of operators barely scratching the surface of what’s possible, national regulation is the overarching goal.

While a single advertising campaign is unlikely to change the legal dynamics in states such as Kerala, it’s another positive step.

Indeed, as more famous faces lend their support to the game, lawmakers may be forced to reassess their assumptions that poker is a form of gambling. If that happens, the game could easily become a mainstream sport in India.