The Lumi Wallet Digest is with you again after a short break in August, and you haven’t missed much, for better or worse. Block.one continues its development with their heads down, the community continues to put forward ideas for improvements to the blockchain, and the EOS price during the Summer seems to have found its comfortable niche around $3.3, until the next big shift on the blockchain.

We hear about all the processes that will eventually lead to this, but have there been any results? Is it possible to not only discuss governance but also actually change it? And which idea of Dan Larimer might be the next big Block.one announcement? Let’s find out.

REX staking came to Telos, a sister chain of EOS. They claim the rewards are going to be much higher than on other EOSIO chains, thanks to recently passed Telos Economic plan. 1,000,000 TLOS per month will be funded as an additional reward for REX staking. The expected reward is around 30% annual interest.

Liquidapps, the Dapp Network services company, bridged EOS and Ethereum, making cross-chain dapps a reality. It connected smart contract functions on EOS and Ethereum, enabling developers to easily create dApps and then to deploy them on both networks.

Changenow exchange introduced Fiat purchase options of EOS. The ChangeNow exchange is a multi-currency exchange that claims to provide the fastest transactions on the market for more than 170 coins, ranging on average from 2 to 20 minutes.

Alpha’a.io, a project for artwork authentication, proposed a solution to guarantee ownership and transactional history of the full chain of custody of an artwork.

The EOSIO-lock service introduced a solution that provides temporary immutability for EOS accounts, exploiting the possibilities of a flexible EOS permission system.

EOSDT is NOW Tradeable on Cripto InterCambio, one of the leading instant cryptocurrency exchanges in Latin America.

Murmur, a reward-based social networking platform, introduced a global update, reworking the platform almost from the ground-up — from UI to changes in the contract. Also, it introduced a bunch of new features, making content upload and management easier.

EOS Go, the homepage for all things EOS, opened Newsroom, aiming to collect all the news about EOS in one place. We, as the people writing digests about EOS, totally approve this message!

Block.one hasn’t spoiled us with news for a long time but finally, Brendan Blummer broke the silence and made a statement on telegram as to why: 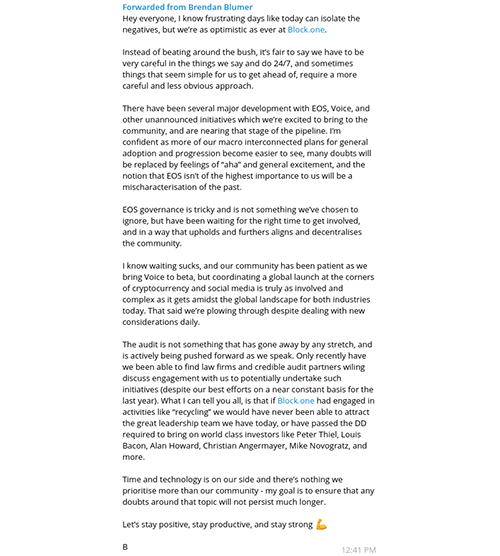 To sum it up shortly:

These are good words, but we hope they will soon be followed by some measurable actions, because general dissatisfaction in the EOS community grows, and even the most influential voices in EOS admit that they have to diversify their assets until there are some real breakthroughs on the blockchain.

There has to be a balance between the technical improvements and theoretical declarations that are most interesting for developers and enthusiasts and the actual grounds for common EOS holders to believe in the return of their hard-earned investments.

That being said, Block.one had two releases worth noting in the last month:

Block.one released the new Android Keystore Plugin for the EOSIO SDK for Java. This alpha release allows developers to engineer a hardware-backed keystore into mobile applications on Android operating systems. If a hardware option is unavailable, the keys will default down to a secure software container environment.

Also, they’ve released the final part of the 4-volume series on EOSIO Strategic Vision. This one is called “Enterprise Blockchain” and is focused mainly on the complex needs of EOSIO Enterprise Blockchain customers and how the EOSIO platform will evolve to meet them.

“To better serve businesses wishing to create their own token, we’re creating simple interfaces that reduce technical barriers. This will make it possible to rapidly issue and manage a token without having to deploy a contract. “

While Brendan Blumer was calming the public, hungry for new announcements, Zack from EverythingEOS discovered that Dan Larimer patented a digital identity solution. This ID patent is based on proof of co-location (or proof of identity): users can verify their identity by taking a photograph of themselves with their friends in the same location and upload the picture on the blockchain, where their identities are verified.

That’s how it is described in the patent:

Basically, if implemented properly – it is digital proof of your identity, separate from the state, which is very important, as only the central authority can currently issue and verify your identity. The U.N also states that 1.1 billion people worldwide have no ownership claim to their identity. Without an identity, people are unable to own real estate, vote, receive government services or perks, open a bank account or find full-time employment.

This is promising, but won’t be expected to be implemented anytime soon – the path from the patent to the working product is usually a long one.

New Hope for Governance on EOS

The debate on improving, changing, and fixing EOS governance is an everlasting topic – we’ve even published an article on EOS Go with all the major reform proposals out there. Every week analytical articles, proposals, and criticisms of those proposals arise, but in August something outstanding happened: one of the solutions finally passed, changing rules for BPs.

This happened thanks to ColintalksCrypto and his proxy for voting, which accumulated enough votes to kick out BPs that were against the “regproducer” contract being implemented.

The Regproducer contract is a smart contract put forth by EOS42. It is best understood as a mutually agreed-upon guide for protecting the EOS blockchain together. For example, when a Block Producer is chronically missing blocks, contracts such as regproducer should be culturally understood as a way to protect mutual interests, rather than a “weapon” of enforcement. It ensures that things run smoothly and securely on the blockchain.

“If you are a block producer – you have to produce blocks, that’s the bare minimum. If you aren’t doing it – it’s bye-bye.”

The contract raised the bar of the standard of technical perfection and excellence expected from block producers. But most importantly, this has proved that proxy voting is an effective tool of casting a vote. The mechanics of it look like a party system – you delegate the vote to the proxy and it accumulates the votes to pass the decision you were voting for, just like it was demonstrated with the regproducer vote.

This is a testament to proxies and in general, voting on EOS does matter and the blockchain’s governance is still in the hands of users, not cartels.

August wasn’t to big on events for EOS. While Block.one is working hard on getting their big promises done, the prices and projects seem to follow the general sleepiness in the media. The only hope is the harvest that is coming in the middle of Autumn. Until then, we can only recommend being patient, following the debates and news on EOS, and staying tuned for our next Lumi Wallet Digest on EOS!