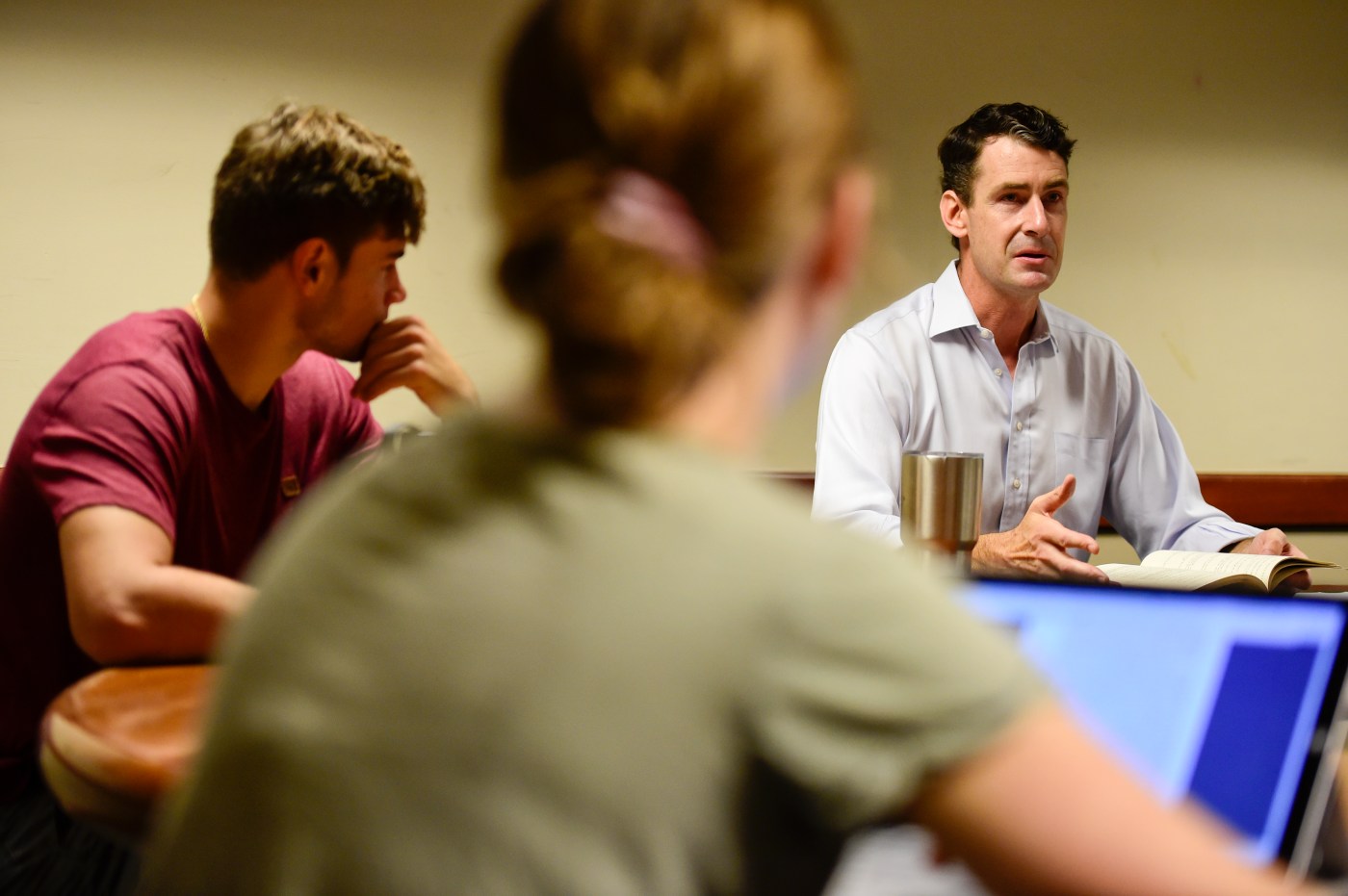 Clancy Herbst, who studied engineering at the University of Colorado Boulder, hadn’t attended a philosophy seminar until he was in his 60s and his wife, Linda Herbst, suggested he join her for one. Clancy Herbst left the seminar in awe and wondered why he’d never had that opportunity as a student.

So, he and his wife worked with CU Boulder to start a program and an endowment that would allow engineering students to take smaller humanities classes with no prerequisites. Otherwise, students have to take large lecture hall introductory courses.

Herbst Program seminars have only about a dozen students each, according to Leland Giovannelli, director of the program.  In these classes, students come together around a seminar table to discuss their thoughts — not only about the day’s text, but also about their own lives and educations. They spend time with professors one-on-one, talking about their writing and working through ideas.

“We challenge our STEM students to be intellectually rigorous beyond STEM fields,” Giovannelli said, referencing the acronym used for science, technology, engineering and math. “We are able to bring those discussions back to engineering.”

The program is about more than reading old books. It’s about challenging students to think about the world and how they fit into it, and what the ethical effects of their work as engineers will be, Giovannelli said.

Many students enter engineering college not realizing that the engineering profession entails more than solving textbook problems in math and science, Giovannelli said. To be successful at engineering, they must learn about “negotiating open-ended questions,”  which is what they do in Herbst, she said.

“It is a program housed within engineering that enables our engineering students to better understand the world in which they live, in which their engineering skills will be put to practice,” said College of Engineering and Applied Science Dean Robert Braun. “It’s where engineering meets society, if you will.”

Kane Turner studied civil engineering at CU Boulder, only to return years later to teach humanities subjects as a lecturer in the Herbst Program.

Turner went back to school in his 30s to get a Ph.D. in political philosophy, and credits his time in the Herbst Program as what introduced him to classic literature and philosophical ideas.

Once he finished his undergraduate degree, Turner said he continued reading the classics and talking with people about those ideas.

“It really made me think that I needed to think about more serious topics in my life,” he said.

He still works in engineering, as a supervisor for a local housing developer, but enjoys his time as a teacher.

“A lot of the questions maybe are unresolved, but you start to see the full complication of them and you never really want to give up on them,” he said.

Turner said the knowledge he has gained from the humanities makes him look at his engineering career more seriously.

Jesus Gabriel Ortiz Tovar, a 2017 graduate who studied computer science and now works as a software developer for the university, said the program helped him think about how technological revolutions have disrupted the world, in ways both good and bad. The classes made him think about how his work could influence society, whether it’s with cybersecurity issues or privacy and data concerns.

Ryan Blay, who studied aerospace engineering and graduated in the spring, said he got hooked on Herbst classes after taking one.

The program made “engineering meaningful,” he said.

The discussions on ethics made him think harder about where he wanted to work.

“It really gives you extra moral weight on your decisions,” he said. “… I don’t think I’ll ever work for war-producing companies.”

One of the most important things taught through humanities classes is communication, said Anja Lange, a senior instructor in the program. Students learn how to “express and describe the position you’re in in society,” define problems, and listen carefully to others.

“You don’t find out about yourself by looking in a mirror,” she said. Instead, students learn about themselves through reading texts and seeing reflections of life in them.

One of the most obvious examples is “Frankenstein,” which lets them examine the responsibility of scientists and thus think about the consequences of their own work, Lange said.

Another is Aristotle. Students consider him “too vague” at first, Giovannelli said. Through discussion, however, they realize that his method works when applied, as they can discover what’s right for themselves only by reflecting on their own experience, she said.

“Humanities are so often about some of the thorniest questions,” she said, and through Herbst, engineering students learn to be comfortable with uncertainty.

Lange said she feels rewarded as a teacher when she sees students at first frustrated about the questions, but then hears them talking about the issues outside of class.

The deep conversations that come out of Herbst classes also can help students bond and make the transition to college easier.

Nagisa Her, a senior studying chemical and biological engineering at CU Boulder, took her first Herbst classes during her freshman year, which she said was a tough transition period.

“The Herbst classes were a great way to talk to other students who were in different engineering disciplines and discuss the many views that our class had about ethics, why we chose to study engineering, and most of all helping me to find and build a community on campus,” she said in an email. “Herbst classes are a great reminder that to be an engineer, I have to be more than someone who knows how to work with differential equations. I have to be someone who can understand different cultures and to also know that every engineering decision made impacts multiple communities in different ways.”

Giovannelli said she thinks the ability to have those conversations is important “in this Facebook world.”

“It really moves me,” she said. “Students will say, ‘I know my classmates better than I know my friends.’”