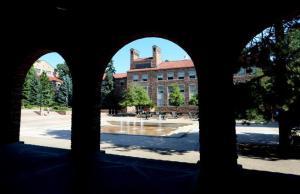 The University of Colorado Boulder has settled a lawsuit with a former graduate student who alleged the university discriminated against her because she suffered medical issues while working in the Armory building on campus.

The suit, brought by Murray Meetze in federal court, was settled for $5,000 last week. Meetze had originally sued for lost wages.

Meetze worked at CU Boulder from 2014 until 2017 in the College of Media, Communication and Information, which is housed in the Armory building, according to the initial complaint. She has had life-long allergies to mold and mildew, a history of asthma, and Mast Cell Activation Syndrome, among other issues.

In February 2015, Meetze told the graduate studies program director that she was becoming sick due to exposure to mold in the Armory building. She was allowed to work from home.

In August 2015, CU Boulder and Dean Lori Bergen verbally withdrew Meetze’s accommodations and said she’d have to re-prove her need, according to the complaint. In 2017, Meetze’s position in the Internships Office was eliminated.

In CU Boulder’s response, the university states that Meetze was asked to formally request accomodations after being informally allowed to work at home. She was given six weeks to provide documentation to the Americans with Disabilities Act office. Meetze was still allowed to work from home even after the six-week period ended, according to the motion to dismiss. The university then redistributed the funds allocated to her part-time position in 2017, eliminating her job.

“Put simply, attempting to engage Plaintiff in the interactive process, and allowing Plaintiff to continue working from home after Plaintiff refused to participate, does not establish an ADA violation,” the university’s motion to dismiss states.

The two parties agreed to settle, on the conditions that the university denies liability for the issues raised in the suit and that Meetze cannot apply for employment at any of the University of Colorado’s campuses in the future.

The Daily Camera obtained the latest air quality test conducted in the Armory, which was in March 2015 in response to the complaints. The report indicates that the airborne mold spore level was “well within the range of what is normal in buildings in our region,” according to James Dennison of Century Environmental Hygiene, who conducted the test.

Dennison said the most conservative and protective standard was used, when advising CU Boulder about the issue, and it was found that air quality with respect to airborne mold spores was normal.

When asked if lower levels could affect some people more than others, Dennison said he has not heard any doctors say that a normal level could cause effects in anyone. However, he said in an email that “science has little knowledge of what levels would affect people, because people vary widely in response (i.e. some people maybe wouldn’t respond to even very high levels), and because there are hundreds of thousands of species of mold, and numerous potential health effects, and because people vary so widely that there are millions of different combinations to try to test.”

“This is considered protective, since there are few if any reports that humans are affected by normal outside levels,” he said. “Clearly, the environment described by the data in that report would not be considered dangerous (with respect to mold).”