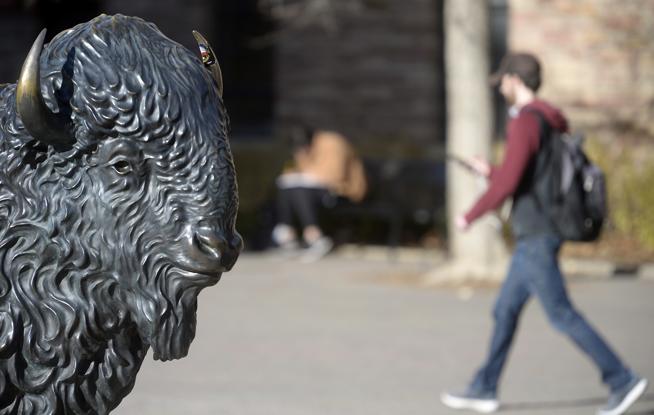 Walking into a University of Colorado Boulder engineering class these days is a toss up — are you going to hear a lecture about complex math equations and scientific theories or find students in a circle talking about classic literature?

Since Shilo Brooks took over as faculty director of the Engineering Leadership Program last year, he’s revamped the program with a focus on how liberal arts can help engineers and scientists solve real-world problems.

“The way science and technology are affecting American society are in the news all the time, and I think people wonder, ‘These people are really starting to affect society, what can we do about it?’” Brooks said. “Our approach is unique in that we say science and technology change, it’s difficult to predict how inventions will affect the world and what you need is a liberal arts education, a knowledge outside of science and technology that permits you to think through problems with a kind of background that’s not strictly technical.”

Brooks will have students in his leadership classes read “The Education of Cyrus” by Xenophon, which is about the establishment of a massive empire, and then pivot to talking about Mark Zuckerberg and the runaway growth of Facebook.

“I’m trying to make a case in there being a connection between liberal arts and (science, technology, engineering and math) STEM and show how liberal arts can provide students in STEM an intellectual agility and pry open their souls to expose them to broad daylight,” he said. “It makes them ask, ‘Is my character good or bad?’”

Sophomore Collin Kasunic is one of the more than 400 students who have enrolled in an engineering leadership class since the program relaunched in spring 2019.

Kasunic’s first experience with a humanities class taught by Brooks was outside of the leadership program, but Kasunic said he was drawn to Brooks’ teaching style.

“At first I thought, ‘I have to take a humanities class as an engineer? What is that about?’” he said. “It definitely exceeded my expectations.”

Kasunic, an aerospace engineering major, enrolled in one of Brooks’ leadership classes in the spring and was “hooked,” he said.

“I’ve always been interested in leadership since I was a kid, and this was engineering taught with an engineer’s brain,” Kasunic said. “An engineer is open to any argument as long as you rationalize it.”

The Engineering Leadership Program was recognized by a national higher education group, the American Council of Trustees and Alumni, as part of its “Oases of Excellence” project.

The organization’s mission is to promote rigor and excellence at colleges and universities across the country in a time of rising costs and declining standards, said Director of Academic Affairs Jonathan Pidluzny.

The CU program’s approach is unique, Pidluzny said, and should be replicated at other institutions.

“They’re blending liberal arts with the political sciences and recognizing some of the most important questions we’ll ask in the coming years,” he said. “It’s training people in natural sciences and engineering to think philosophically about issues.”

“In our discussions with employers, the kinds of things they’re looking for is students who are well-rounded, who can communicate ideas well and understand literature and philosophy beyond just the field they’re in,” he said. “This program has that.”

Being recognized as an “Oasis of Excellence” could also mean additional donations for the engineering leadership program, Pidluzny said. The ACTA publishes a list of institutions it supports and suggestions that its members donate to programs that are academically rigorous and have high standards.