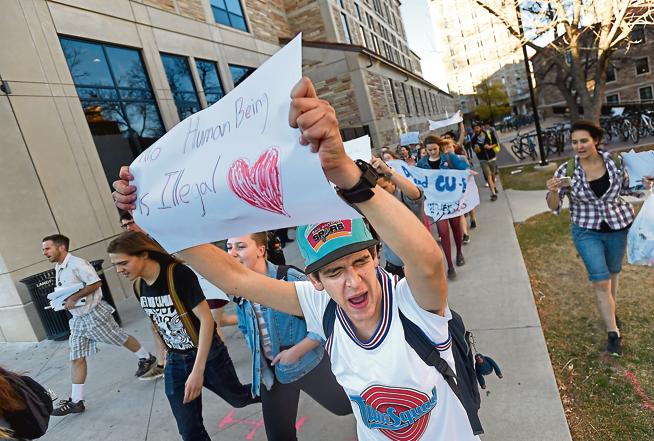 The CU system was one of 165 colleges and universities to support the brief, which argued DACA allows people to pursue higher education who previously did not have access to it and who benefit institutions through higher enrollment, financial support, diversity and contributions to campus life.

The Supreme Court is set to hear oral arguments on the legality of the program in November, more than two years after President Donald Trump’s administration announced the program’s end.

The brief aligns with the university’s previous support for the program, said Patrick O’Rourke, vice president and university system counsel.

“I think all of our chancellors and President (Mark) Kennedy and President (Bruce) Benson before him have been very strong in their support for existing DACA students and their ability to continue and complete their education,” O’Rourke said.

Chapin said she was pleased to hear about the school’s support for students “regardless of immigration status.”

“It’s been emotionally very difficult for DACA recipients across the country and causes a lot of anxiety,” she said. “At this point, the federal government is not continuing DACA because they want to, but because they have to through court injunctions, and that doesn’t feel very safe.”

The program allows people who immigrated to the United States illegally as children to apply for deferred deportation every two years. It also allows them to apply for a social security number and to obtain work authorization. Acceptance is contingent upon age, education and criminal record.

Students who benefit from the program are scattered across campus in a wide range of majors and programs, Chapin said.

“They are tremendously beneficial to the campus itself and to the student body and its environment,” Chapin said. “As people, they tend to be tremendously resilient because they’ve come up against obstacles that we as U.S. citizens don’t understand.”

Most of the students Chapin has helped also work to support themselves because they cannot receive federal financial aid, Chapin said.

“They have had to have a maturity and resilience that I think many young people their age don’t have to have until later in life,” she said.

Students who benefit from the program also tend to be high achieving, said David Aragon, assistant vice chancellor for diversity and student success.

“A number of DACA recipients were high school valedictorians and demonstrate remarkable efforts in funding their education,” Aragon said. “I’ve seen students take that same high achievement and put it to work at the university. I think their life experiences add a lot to the learning community and their interactions with their professors and peers.”

CU Boulder does not ask students for their immigration status when they apply, according to spokeswoman Deborah Méndez Wilson.

The Supreme Court will announce a decision on the case before June 2020.