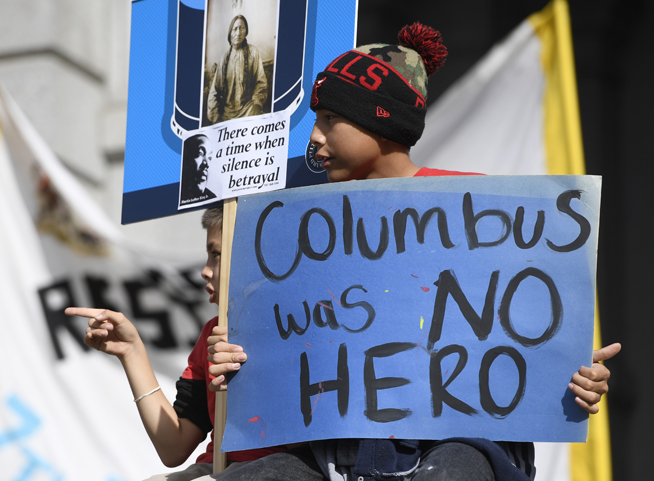 Even by the dismal standards of the 1400s, Christopher Columbus was a terrible human being.

So why does California continue to honor him with his own holiday when other states have already replaced it with Indigenous Peoples’ Day? A brief review of the terrors he unleashed reveals why it’s time to make Columbus Day a relic of the past.

Columbus’ use of torture and dismemberment while serving as governor of a Spanish colony in the Caribbean earned him a reputation for shocking sadism.

“He even ordered the ears and nose cut off one miscreant, who was also whipped, shackled, and banished from the island. He ordered a cabin boy’s hand nailed in public to the spot where he had pulled a trap from a river and caught a fish,” wrote Laurence Bergreen in “Columbus: The Four Voyages, 1492-1504.”

This was how Columbus treated his fellow Europeans, but it was nothing compared to the horrors he inflicted on indigenous people. Columbus’ most vicious atrocities are recounted in Bergreen’s book, as well as in an excellent summary titled “9 reasons Christopher Columbus was a murderer, tyrant, and scoundrel” by Dylan Matthews of Vox.

Columbus allowed settlers to sell girls as young as 9 or 10 into sexual slavery. “There are plenty of dealers who go about looking for girls; those from nine to ten are now in demand, and for all ages a good price must be paid,” Columbus wrote in a letter, according to “Christopher Columbus: His Life, His Works, His Remains” by John Boyd Thacher.

There’s no reason why the nation should continue to honor and commemorate the perpetrator of such deeds.

When a witness in a murder case is himself murdered just days after a high-profile trial, it is both right and appropriate for a community to want answers and want answers quickly. And so it is with Joshua Brown. But, now, as details surrounding his murder dribble out, we hope there is a lesson in all of this for all of us.

First, what should be top of mind for all involved — and this includes community leaders whose comments have the power to rally the people — is that in all cases, we are better off when cooler heads prevail. In this instance, there was speculation that came with the insinuation that Brown’s murder was somehow connected to his testimony in the Amber Gugyer trial. No murder should be tolerated, but targeting witnesses is a direct attack on our justice system. But to speculate wildly without any facts is itself destructive.

Now we are seeing that investigators have concluded that Joshua Brown’s murder was tied up in a drug deal gone bad. And that brings us to our second takeaway. Joshua Brown was a resident of Dallas and a person who deserves justice. If it is later proven that he was himself engaged in criminal activity, no one should be sanguine or dismissive of his murder. When we turn a blind eye to violent crime — even when it comes in the commission of other crimes — we undermine the rule of law and allow violence to creep back into our streets. It should be clear that violence against any person is an offense against our community.