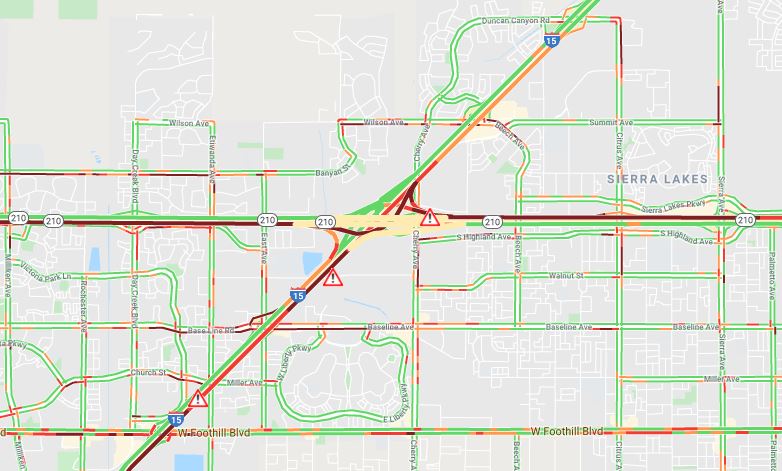 A 10-acre fire shut down the 210 Freeway at the interchange with the 15 on the Fontana/Rancho Cucamonga border Thursday afternoon, Oct. 10.

Officials got the HOV and No. 1 lane on the westbound side reopen about 4:40 p.m. About 15 minutes later, they reopened the HOV and No. 1 and 2 lanes on the eastbound side. The connector from the northbound 15 to the eastbound 210 briefly reopened, but then closed again at 5:30, according to a California Highway Patrol incident log. The other connectors between the freeways were open.

All lanes on the west 210 Freeway were re-opened at around 6 p.m., with all lanes across both sides of the freeway opening as of 6:30 p.m.

The San Bernardino County Fire Department said on Twitter about 5:30 p.m. that the fire was fully contained at 10 acres, but that crews were staying on scene for mop-up.

No injuries or structure damage were reported, and the fire’s cause was under investigation, officials said.

The fire started about 2:45 p.m. in some grass on the shoulder of the westbound 210 near the connector to the southbound 15, according to the CHP incident log. That’s right where the freeway crosses over Cherry Avenue, which gave the fire its name, the Cherry Incident.

The smoke reduced visibility to zero, and all lanes were soon closed. By about 4 p.m., the fire had crossed the 210.

The Cherry Incident was one of multiple fires burning across Southern California on an extremely windy Thursday.