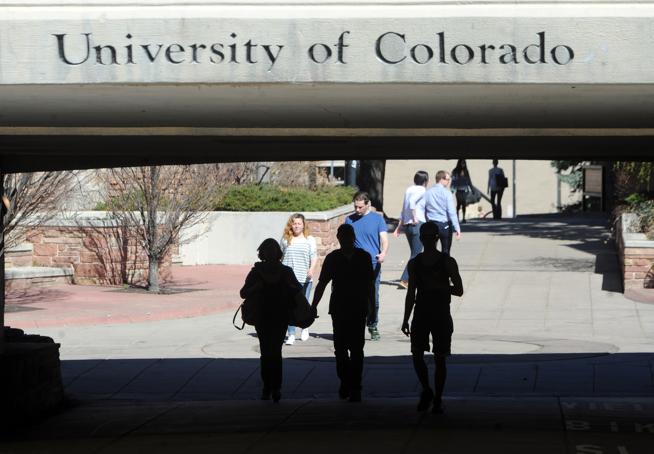 Future-of-work strategist Heather McGowan doesn’t see the formula of “get a good college degree to get a good job” working for much longer.

Instead, she told an audience at the University of Colorado Boulder on Wednesday, students need the ability to continuously learn and adapt if they want to succeed in a future where they will have an average of 17 jobs across five industries.

“We stand at an inflection point in human history,” McGowan said. “There are some real fundamental steps we’re going to need to take. We need to focus on learning over knowing.”

McGowan spoke Wednesday at “The Future of Work and Learning, and CU’s Role in Furthering the Public Good.” For the second half of the event, a panel of six leaders of CU Boulder’s strategic initiatives talked about how the university is changing as it implements its Academic Futures priorities.

Previously, McGowan said, you spent about a third of your life in education, the next third in a career and the last third in retirement. For colleges, their role was to get students into their first jobs. Now, as life expectancy increases and the workforce changes, she said, work is how you continuously learn.

“Why don’t we teach them to surf rather than just step on the surfboard,” she said.

She added that students should start by figuring out their purpose, then think about what drives them and what they’re uniquely good at. Instead of defining your identity, she said, a job should be “how you apply your gifts today.”

In a survey of CEOs, she added, the skills they said are hardest to find include creativity, innovation, problem solving, collaboration and adaptability — while STEM and second language skills are falling in importance.

“The more our economy is digitized, the more important uniquely human skills become,” she said.

Following her talk, the panel of CU leaders gave updates on the Academic Futures effort.

“We can start to make some of the changes that will allow us to be more responsive,” he said Wednesday, adding the disruptive changes that are coming can either be viewed as opportunities or threats. “I see it as an exciting challenge.”

One focus area is improving the first-year experience for freshmen and making it consistent and equitable, regardless of degree program.

“We’re talking about a culture change,” said Vice Provost Mary Kraus. “We need to get over everyone sitting in their little silos to work together.”

She’s leading the move to a first-year advising model that adds more advisors to reduce caseloads and brings all advisers under a common structure and budget. She also wants to see traditions started at each residential hall to “make that a special place for each cohort of students.”

Digital learning is another focus area, with CU Boulder creating a new organization to oversee teaching and technology and online and distance learning.

The digital learning goal is increasing access to the university beyond the campus, especially for those in the workforce who already have a degree and are seeking additional education, Moore said.

One example is CU Boulder’s newly created, online Master of Science in Electrical Engineering, which is hosted through the online platform Coursera. The degree, designed for working professionals, will have with more than 100 four- to six-week courses when the curriculum is fully developed.

The university is piloting the program with a limited number of students starting next month, while the full program starts in 2020.

Other futures initiatives are still in the planning phase, including work to make the university more inclusive and work on interdisciplinary teaching and research.