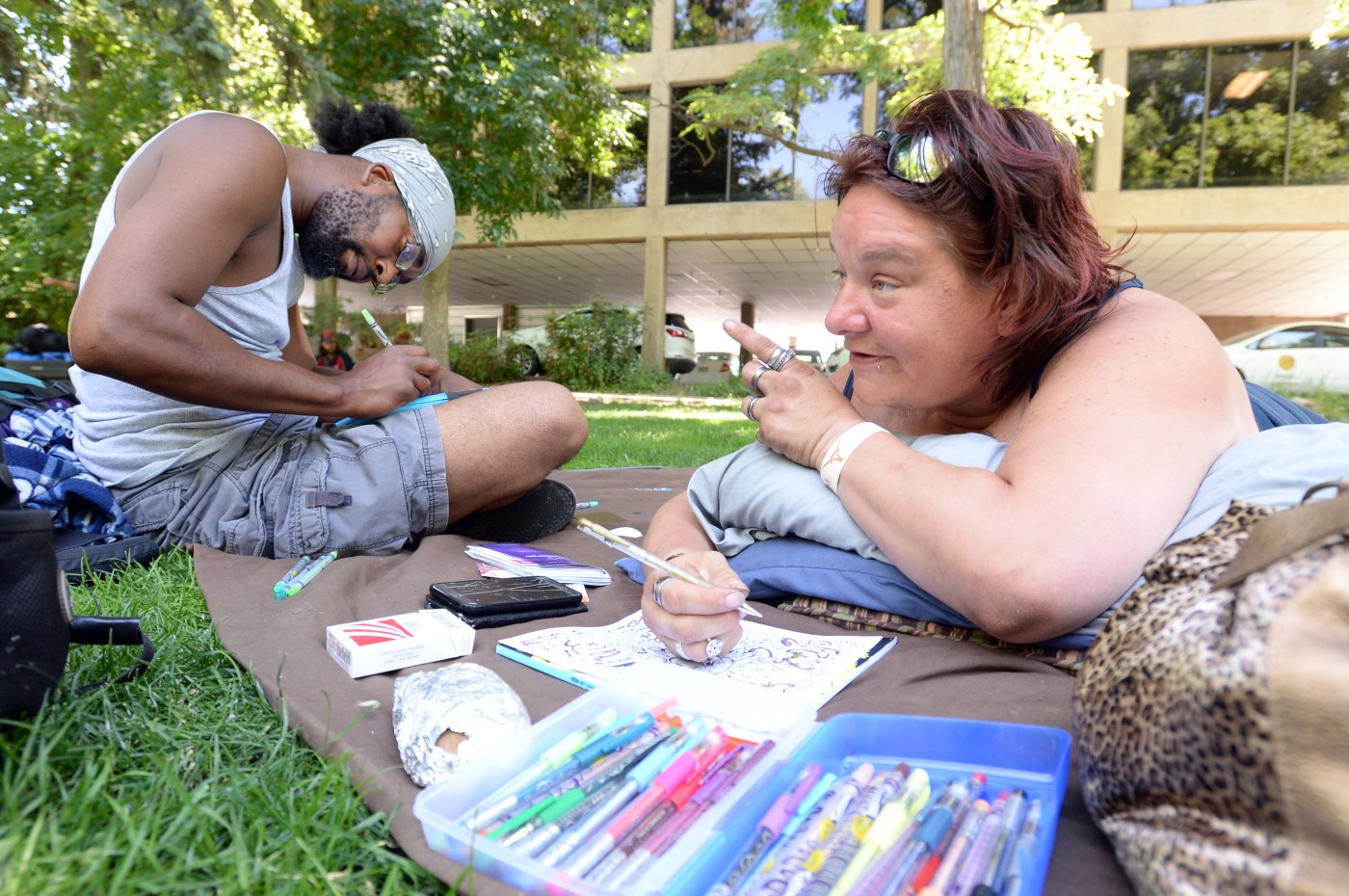 Ezra Vaughn was taking a sip of water from his opaque, plastic bottle he filled at the nearby Regional Transportation District bus station. Dressed in a black tank top, black jeans, black shoes and a black bandana to hold back his hair, there’s not much else he could do aside from chilling in the shade underneath a tree at Boulder Central Park. In fact, there aren’t a lot of options for a homeless man like Vaughn to escape the unrelenting mid-July heat.

Just find somewhere, he said, and get some water.

Saturday’s high of 99 degrees was the 14th time Boulder saw the temperature climb to 90 or above in 2019, and the 10th time in the past 16 days. The scorchers strain Boulder’s at-risk populations the most: Children, seniors, those with medical conditions and the homeless are at a greater risk for heat stroke, heat cramps and dehydration, the city stated in a recent news release.

Blake Edmond is the street outreach and drop-in manager for Attention Homes emergency shelter, which specializes in providing services for homeless youth ages 12 to 24. Monday through Friday, Edmond will walk around Boulder handing out food, water and hygiene products to the homeless.

There are options downtown for the homeless in need of water. The Boulder Public Library and RTD station have free access to water, but many homeless individuals don’t have containers to fill.

By Edmond’s estimation, only a quarter of the homeless people he sees when distributing supplies have a water bottle. And if they’re not in the downtown area, access to clean water is harder to come by.

“In my experience, if you leave the downtown area, you have limited options. Often times people will be drinking out of Boulder Creek, which obviously isn’t good,” Edmond said. “I run into people on a daily basis who tell me, ‘Thank God you’re here.’ I’ll give them a cup of water, they drink it. Then I’ll give them another one and they’ll drink it, and so on.”

Drinking from Boulder Creek could have dangerous side effects. Various areas of the creek are home to high levels of E.coli because of wildlife defecation. Drinking E.coli contaminated water can lead to cramps, vomiting, diarrhea and sometimes fatal side effects.

Edmond implored people to buy a 24-pack of water bottles and to hand water out to homeless people they see. Aside from the humanitarian aspect, he said it’s “literally the source of life.”

However, some say the situation isn’t as dire as Edmond’s experiences might indicate.

Greg Harms, executive director of the Boulder Shelter for the Homeless, said the people the shelter sees are good about keeping a water bottle handy and staying hydrated. He said most people in Colorado, homeless or not, adapt to the state’s summer climate.

And while the heat can be trying, it doesn’t have the inherent dangers as the winter cold does, Harms said.

“People on the streets have a very difficult life, you’d be surprised how they can invent and innovate survival,” he said. “People caught in the Colorado cold will literally die, so those months are always of more concern.”

In Central Park, Vaughn was talking about his experience being homeless when Candy arrived to their makeshift bed, a comforter spread across the grass with two pillows, with a cup of water for him. Both are parents. Vaughn has a son and daughter while Candy has a son who is a senior in high school. All of them live out of state.

“A social worker said we should bring our kids here with us so that we can get these deals where you can stay somewhere for 14 days,” Vaughn said.

“Why the hell would we do that, it doesn’t make any sense,” Candy chimed in. “If you’re not a family and you’re a couple like us or on your own, you don’t get any special treatment. But I would never bring my children into this lifestyle.”

Boulder has resources for homeless people looking for a break from the heat. The Boulder Shelter’s website has a downloadable PDF document that lists places to stay and receive food and clothes, along with other services.

However, Vaughn said he and Candy were given a flyer by someone, they don’t remember who, advertising the Boulder Homeless Women’s Initiative from 2015. Because of this, Harms said it’s vital that people have the most up-to-date information if they want to help the homeless.

Those looking to help should visit Boulder Shelter’s website, bouldershelter.org, for volunteer information and access to the latest resource list. Donations are especially welcome since Harms said the Boulder Shelter sees its lowest donation levels during the summer.