Hossein Ensan put on another big stack poker clinic during Day Two at the WSOP Main Event final table. The session also saw two eliminations, including poker media and fan favorite Garry Gates, and now we are officially down to the final day of the 2019 World Series of Poker with only three players remaining. 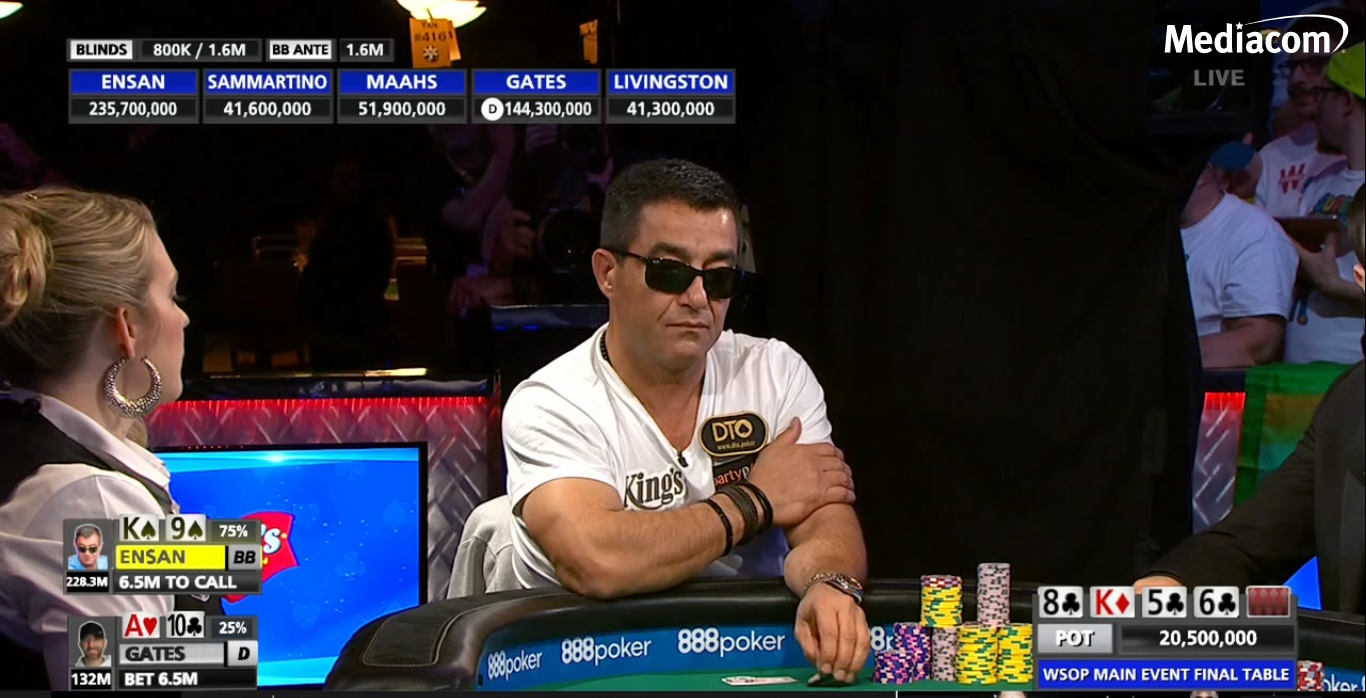 Hossein Ensan hasn’t yet relinquished his lead at the final table. (Image: ESPN)

As CardsChat handicapped, Ensan entered the final table as the heavy favorite. And, with one session remaining and only two players standing in his way, it appears our projection may have been accurate.

Hossein Ensan began the final table with nearly a 2-1 chip advantage over Garry Gates in second place. Through two final table sessions, Ensan still has yet to relinquish his lead at any point. In fact, the German-Iranian pro has increased that lead by a sizable amount with three players left.

Ensan has 63.4 percent of the total chips in play, and he’s earned every one. Sure, he’s gotten his fair share of big hands, but he’s played his big stack like a charm, often pushing opponents off the best hand and putting pressure on the smaller stacks.

The chip leader made few mistakes and has been right on nearly every decision. He’s simply teaching viewers a lesson on how to properly play with a big stack.

If he continues that masterful performance tonight (6 pm PT on ESPN), barring a sick run of cards, Hossein Ensan will be your 2019 WSOP Main Event champion and $10 million richer.

The three remaining players are all guaranteed at least $4 million. Second place will take home $6 million. Life-changing money is at stake during tonight’s final ESPN broadcast.

Garry Gates and Kevin Maahs were polar opposites at the final table. Gates, a long-time poker media member, was adored by poker fans from all over the world. Maahs, on the other hand, irritated viewers with his incessant tanking in obvious fold situations.

Both players have one thing in common, however: they were each eliminated from the Main Event on Monday. Maahs was the first to go approximately three hours into the session. He lost a race with A-10 against the pocket nines of Ensan. Maahs earned $2.2 million for fifth place.

Gates just simply couldn’t get anything going on Monday. The cards didn’t fall his way. He went from 160 million chips early in the session, in second place and barely trailing Ensan at the time, to under 40 million with a short stack in no time. And then Alex Livingston finished him off on the final hand of the night when pocket queens held up against Gates’ pocket sixes.

So, the stage is set for Hossein Ensan, Dario Sammartino, and Alex Livingston to battle it out for the $10 million first place prize and poker glory on Tuesday night. CardsChat will live blog the final evening of the 2019 WSOP beginning at 6 pm PT.