Lightning Network, is so far, the best second layer solution that Bitcoin has witnessed in a very long time. BitMEX Research’s third article on LN dives deep into the punishment system for premature and non-informed closure of nodes.

As seen in the image below, there are four ways a Lightning Network node will face closure. The first and the most secure way to close a node is the “cooperative closure”, where both the parties of the node agree to close the node and the funds are distributed among them, based on the current state of the channel.

The third is “non-cooperative breach and non-justice” closure – the one where a node tries to steal the funds in the channel by attempting to close the channel by broadcasting an earlier state of the channel. However, LN has “locktime” as a failsafe feature – this provides the non-closure party a 24-hour timeframe to confirm if the closure is true. If the above doesn’t get triggered, the funds will be sent to the closure based on the reported earlier state of the channel.

The fourth and the last type is “non-cooperative breach justice” closure – here the non-closing party checks the closure before the locktime period runs out, and creates a “Justice Transaction”, leading to the fail of attempted theft, in such a case, all of the funds will be sent to the non-closure node aka the honest node. 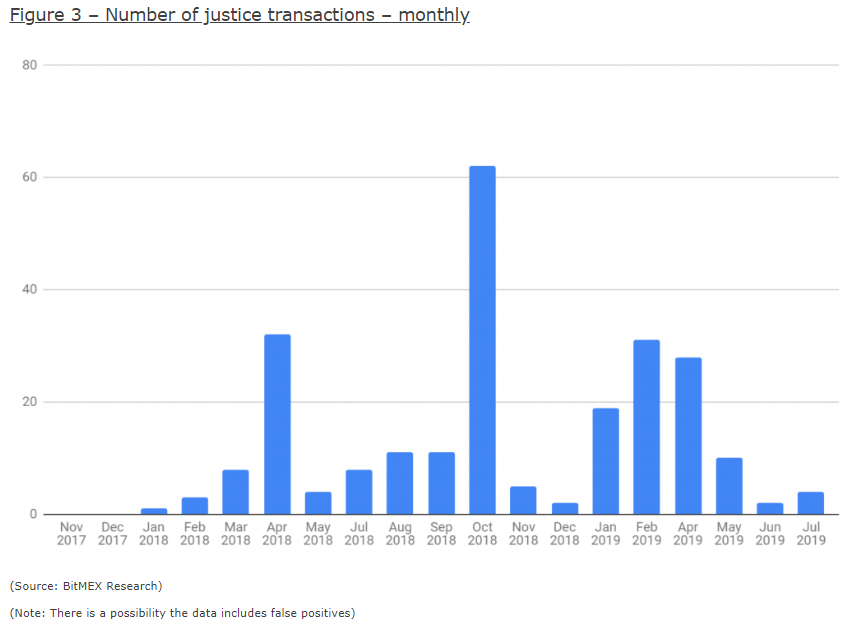 BitMEX research mentioned that they had identified 241 transactions which appeared to be justice transactions amounting to 2.2 BTC [currently worth $22,600] dating as far back as December 2017. Off these 241 transactions, 5 transactions were initiated from BitMEX for the sake of research and that 2 BTC which amounted to 0.7% of the current number of lightning channels.

“In order for the lightning network to succeed as a robust, reliable and scalable payment system, the justice mechanism needs to be effective in deterring and preventing theft… For now, at least according to the data we have analysed, there appears to be a reasonable degree of justice on the burgeoning lightning network.”