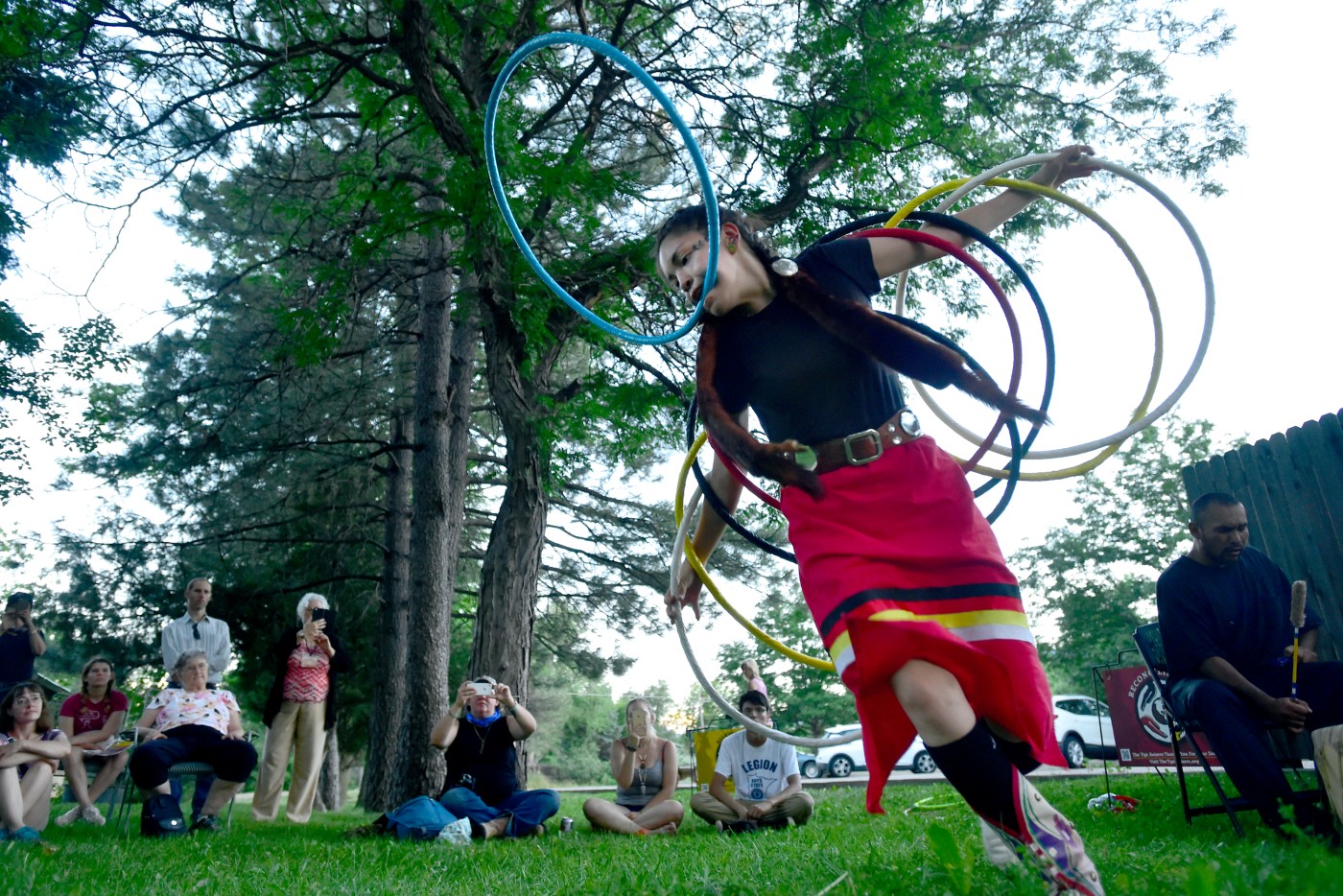 Tuesday afternoon, Silas Red Cloud shared a piece of his Oglala Lakota Nation heritage. In the shade of a tree, he played the drum and sang a spiritual native song as a band of horses and their riders crossed a bridge to get to Unitarian Church of Boulder.

“There are certain songs that go with a horse ride,” Red Cloud said. “It brings energy to them. With horse rides, it’s a way to reconcile with the past and reflect on your life in general.”

The sound of Red Cloud’s drumming was a welcome one for the roughly eight riders who endured a day of nearly 90-degree temperatures traveling by horseback from Golden to Boulder as part of the fifth annual Lakota Ride. The traditional ride started in Sedalia on Saturday and will take riders 440 miles north across the Front Range to Pine Ridge Reservation in South Dakota. The 22-day trek seeks to share the native people’s culture and bring people together through free evening gatherings called “wicotis” (wee-cho-tee), where food, dancing and sacred Native traditions are shared.

About 40 people gathered Tuesday to greet riders. Volunteers were waiting with cups of cold water and a barbecue dinner hosted by the Unitarian Church of Boulder. After the meal, a traditional dance was performed. Riders capped the night by setting up tents and camping in the yard of a resident who volunteered the space. Rest was important, because Wednesday riders were set to continue their journey.

Lori Ventimiglia, Tipi Raisers director of operations, said the Lakota Ride serves as a fundraiser to provide various necessities to those who live on the reservation. At each event, people are invited to donate. Spreading awareness about the organization, also helps to bring in donations. The Tipi Raisers have in the past purchased mattresses, a chicken coop and firewood to distribute to the Oglala Lakota people.

“They are poverty stricken,” Ventimiglia said. “The conditions they are living in, it’s hard for the rest of this country to imagine.”

Red Cloud, of Pine Ridge Reservation, has seen the struggles the Oglala Lakota people face firsthand. He said poverty is a major issue, as are low employment rates and a location that lacks a major natural resource, such as fertile farming soil. Despite the challenges, he emphasized the resiliency and strength of the Oglala Lakota’s culture.

“It’s almost like a Third World country-type of condition and it is right in the middle of America,” Red Cloud said. “We have our hard times, but then we have fun. Through our culture and songs and dances, we can keep healthy and it keeps us motivated.”

This year marked his family’s first time supporting the Lakota Ride in Boulder. He traveled with his wife, Whitnee Eagle, and their children, Rayleigh Red Cloud, 5, and King Red Cloud, 4 . Next year, he said he hopes his family can take part in the horse ride.

As Red Cloud sang Tuesday, horse riders congregated in a circle before dismounting. The horses quickly took to grazing on the grass and drinking from buckets of water, while riders wiped sweat from their eyes. Among those who rode Tuesday was Ventimiglia’s husband Dave Ventimiglia, who serves as the nonprofit’s executive director. He said the ride helps to keep the culture and history of Oglala Lakota people alive.

“It is one of the most beautiful cultures, in my estimation, in the world,” Dave Ventimiglia said. “Primarily what we are trying to do is educate people about the culture and the history — a really tragic history between the Europeans, the United States government and the Lakota people.”

The tumult the Oglala Lakota people experienced created a formula for an impoverished community on the reservation, Dave Ventimiglia said. An indicator of the reservation’s condition is the average life expectancy, which is 48 for a man and 52 for a woman, he said.

Lori Ventimiglia hoped people became aware of these conditions and that the ride brought people together.

“At the heart of our organization is reconciliation and that can’t happen until people get to know one another and they can step outside of their biases of one another,” Lori said.

To donate to the Tipi Raisers, visit thetipiraisers.org/the-lakota-people.html.