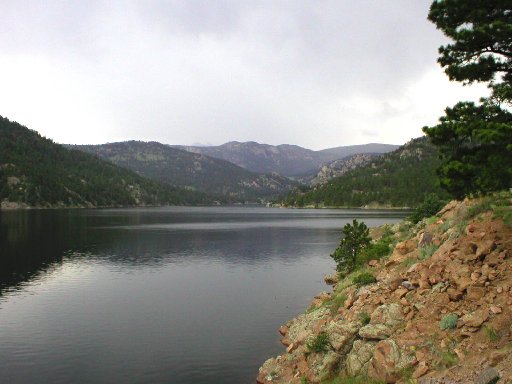 As a main water source for Lyons and Longmont, Button Rock Preserve is expected to be a critical piece of the growing municipalities’ future.

However, as thousands more make use of the trail systems within the preserve, maintaining the watershed has become increasingly difficult.

Historically, visitors use ranged as low as 5,000 to 7,000 people annually, but in 2018, annual visitation surpassed 60,000 people. In addition to incremental impact of the water quality, the significant increase in visitation has put additional pressures on existing infrastructure like the parking lot, bathrooms and trails, as well as the staff, affecting public safety, user conflicts, human-wildlife conflicts, litter and waste collection, and the enforcement of regulations.

This spring, the City of Longmont commissioned a study of the preserve in preparation for drafting a new management plan. During August and September over 800 people were surveyed at Button Rock Preserve to better understand their use and what kind of management practices they would support to protect the water quality as well as environmental health. An inventory of the area’s natural resources, including wildlife, will also be compiled to pinpoint particularly valuable areas.

“There isn’t an immediate threat because we’ve managed that area as a protected watershed for all 50 years, but we want to look at not only what’s happening now, but also what could happen in the future,” Longmont’s water resources manager, Ken Huson, said. “The plan will look at hard science and see what’s there, what the environment can really support, and apply proper management techniques so we won’t have to worry about water quality impacts from visitation in the future and keep it as the really special preserve that it is.”

On Wednesday, Danielle Levine of Longmont Public Works and Natural Resources, presented some of the initial survey of users to the Longmont Sustainability Advisory Board as she and her team prepare to present the study’s complete findings, including the environmental inventory, at a Nov. 6 public meeting and move into the analysis phase of the project.

Of those surveyed, 36% were residents of Longmont, 12% were Denver residents, 9% were Boulder residents and 7% were Lyons residents. The rest were either from other parts of Colorado or out of state.

The majority of users, roughly 60 percent, said they drove to Button Rock with either one or two people in their car and that they would be willing to pay a fee for entrance. Only 37% said a fee would deter them from using the area.

In terms of maintenance, 70% of the respondents said they realize Button Rock was an important source of drinking water and 82% supported prescribed burns to reduce fuels in the preserve’s forests and prevent a large scale fire, the ash from which could have negative consequences on water quality.

As part of the Button Rock Forest Stewardship Plan, which was formulated in 2003 and updated in 2017, roughly 1,000 acres of the 3,000 acre preserve has been thinned. But according to Stefan Reinold, the senior forestry resource specialist for Boulder County Parks and Open Space, “we’re concerned about the whole St. Vrain watershed.”

The most disparity among the survey’s respondents came from a question about visitation numbers. The plurality, 43%, said they could encounter 10 to 25 people within the preserve and still enjoy their visits. The second most popular response, 26%, said their experience would be diminished should they encounter over 10 people on their visit.

While there were no questions on the survey about dogs, Levine said since the City instituted a new policy on May 1 that permitted users to only bring one dog and required it be on a leash, the preserve’s managers have seen a decrease in dog visitation and in dog waste litter. However, in another survey, 59% of users said they disagreed with the policy.

Because the Department of Public Works and Natural Resources will continue to collect environmental data and public survey responses until Oct. 25, which can be submitted at engage.longmontcolorado.gov, it won’t have any analysis completed or recommendations to provide until the Nov. 6 public meeting.

Huson did say, however, that depending on the result of the study visitation limits could be considered.