An updated version of the Partypoker client was dropped for users on Wednesday, offering some new perks for tournament play as well as improvements for Mac users. 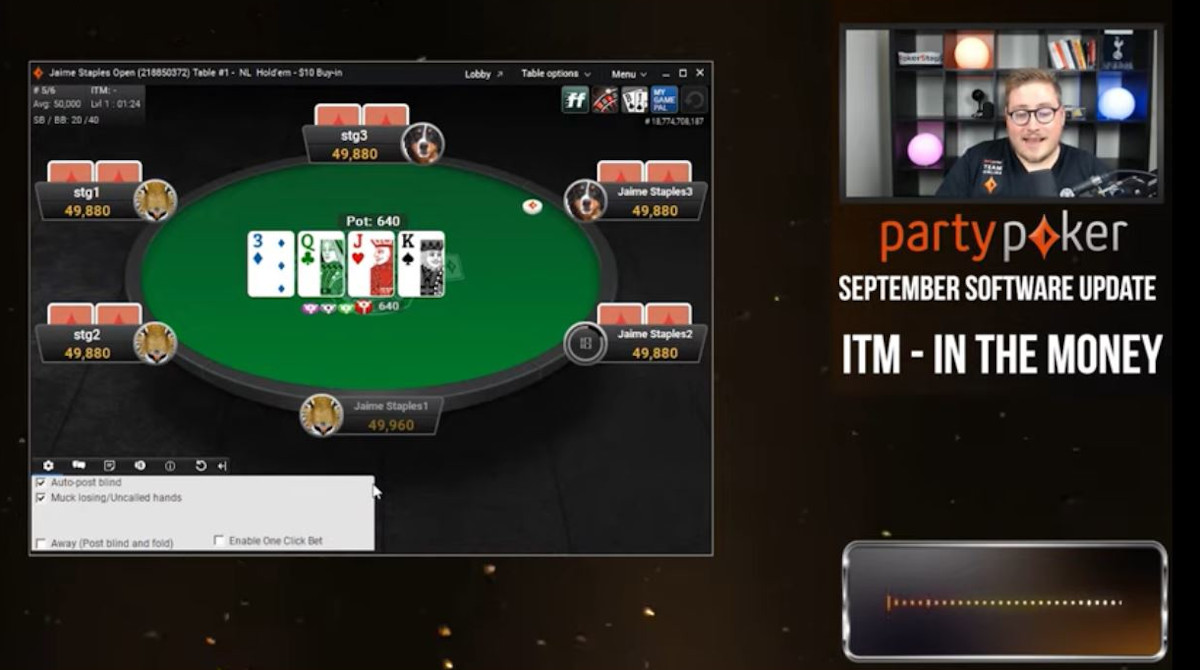 Partypoker unveiled a new software update on Wednesday, which featured a number of quality of life improvements for tournament players. (Image: Partypoker/YouTube)

Many of the added tournament features in particular were quality of life improvements that will mostly appeal to casual players, another sign of the increasing emphasis on creating a poker room designed primarily with recreational users in mind.

Most of the tournament features are largely informational, and will help players keep track of where they stand as an MTT progresses.

For instance, there is now an “in the money” display that indicates how many people will cash in an event, with the color changing as the bubble approaches. While the graphic is not highlighted for most of a tournament, it will turn amber when the field is down to 120 percent of the number of players who will be in the money, and will turn green once all remaining players are guaranteed to cash.

Players will also be able to see several data points at a glance, including the average stack and where they are positioned in the field. For those who like to register late in MTTS, a late reg countdown will now be included for events in the tournament lobby, allowing users to know at a glance how much time they have to get into events that are already running.

Another minor addition to the Windows client is one-click betting, which will allow users to make a custom bet with a single click rather than requiring an additional press of the raise button.

Mac users, on the other hand, are receiving a range of cosmetic updates designed to improve the playing experience. Those connecting to Partypoker from Macs will now be able to customize tables and cards, play on updated oval-shaped tables, and have the option of displaying stack sizes in big blinds rather than chips or currency. The notes system has also been improved, allowing for more color options and optimizing how they are displayed.

While the latest changes are relatively minor, they continue a trend of recreational-friendly moves from Partypoker over the past few months. That has included the decision to prevent users from downloading hand histories, a move that has essentially made it impossible for more serious players to utilize HUDs on the site.

But while the elimination of HUDs will probably provide some measure of relief for weaker players, it also caused controversy. Without hand histories, many have argued, it will be much more difficult for the community to sniff out cheaters, and many players are reluctant to leave that responsibility entirely in the hands of the Partypoker security team.

Partypoker is also trialing the use of real names, at least at some high-stakes tables. While some saw value in allowing railbirds to know who is playing in nosebleed games, others have expressed concerns that requiring players to share real world information could lead to the kinds of stalking and harassment issues frequently reported on social media.