Phil Ivey showed off some bluffs on the PokerGo feature table in the Partypoker Millions €100,000 Super High Roller on Monday. But Igor Kurganov bagged the biggest stack heading into Day Two. 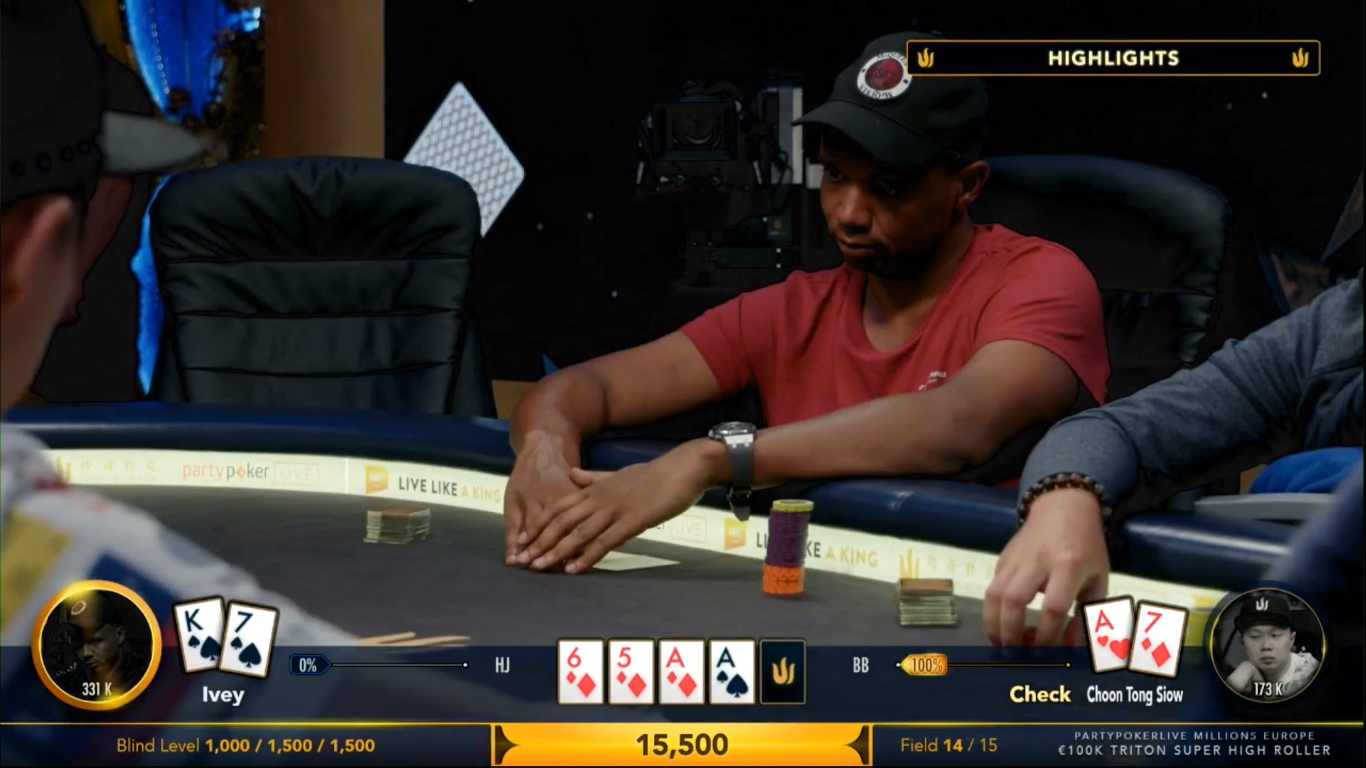 Phil Ivey likes to bluff. A lot. As if you didn’t already know that. (Image: PokerGo)

A small field of just 21 runners, totaling 28 entries, registered for the high stakes event at King’s Casino in Rozvadov, Czech Republich. Tom Dwan was scheduled to compete but has yet to arrive. “Durrrr” has until the end of the first level on Tuesday to register.

If you’ve ever watched Phil Ivey play – and few poker players haven’t – you know the man has a penchant for bluffing. He’s never afraid to pull the trigger no matter how high the stakes. Typical Ivey was on display in Europe on Monday.

Ivey, seated at the PokerGo feature table throughout much of the day, pulled off some successful bluffs. And some unsuccessful ones to such as a hand against Choon Tong Siow where his bluff on the flop against Choon Tong Siow caused him to lose some chips when he paired up on the river. Unfortunately, for the 10-time WSOP winner, that river card gave Siow the nut full house with A-7 on a 6-5-A-A-7 board.

But Ivey’s bluffs, for the most part, helped him become an early chip leader. And although he didn’t finish the day atop the leaderboard, he left King’s Casino with plenty of dancing chips (341,000).

Igor Kurganov got off to a rough start on Monday, busting his first bullet quickly. But he re-bought and nearly quadrupled his 200,000-chip starting stack, good for the Day One chip lead. Other big name pros who bagged big stacks include Charlie Carrel, Sam Trickett, and Tony G.

Play resumes at 2 pm local time in Rozvadov (5 am PT). You can catch the final day’s action live on PokerGo. A total of 21 players will return for Day Two. But we will likely see some additional entries including, perhaps, Tom Dwan.

The prize pool won’t be available until registration closes after the first level on Day Two. We are expecting a winner to be declared by day’s end.