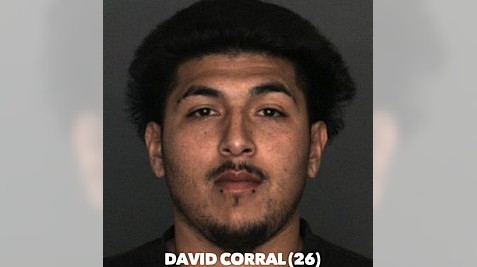 A shooting and police chase ended early Saturday with one man in custody and three hospitalized in critical condition, police said.

An officer patrolling near Cherry and Banana avenues around 1 a.m. heard multiple gunshots and spotted a Cadillac Deville fleeing the area at a high rate of speed, according to a Fontana Police Department statement.

During the ensuing chase, the driver of the Cadillac intentionally rammed another police car, disabling it, police said. The chase ended when the Cadillac lost its right front wheel on the Citrus Avenue overpass at the 10 Freeway.

The driver of the Cadillac – who police identified as 30-year-old Jose Quintanar – was found to have a stab wound in his abdomen, police said. Two other occupants of the vehicle, whose identifies police did not release, had suffered gunshot wounds to their chests.

All three men were taken to a hospital in critical condition.

David Corral, 26, was identified by police as the suspected shooter. Authorities say he was also a passenger in the DeVille.

A fourth potential victim, also believed to have been injured in the same shooting, checked himself into a hospital with a gunshot wound to the leg, police added.

Investigators do not believe there are any suspects. They did not specify a suspected motive for the apparent attack, or indicate how the suspected shooter ended up in the same vehicle as the alleged victims.