Progress for CU Boulder consent training, but some wonder if it’s enough 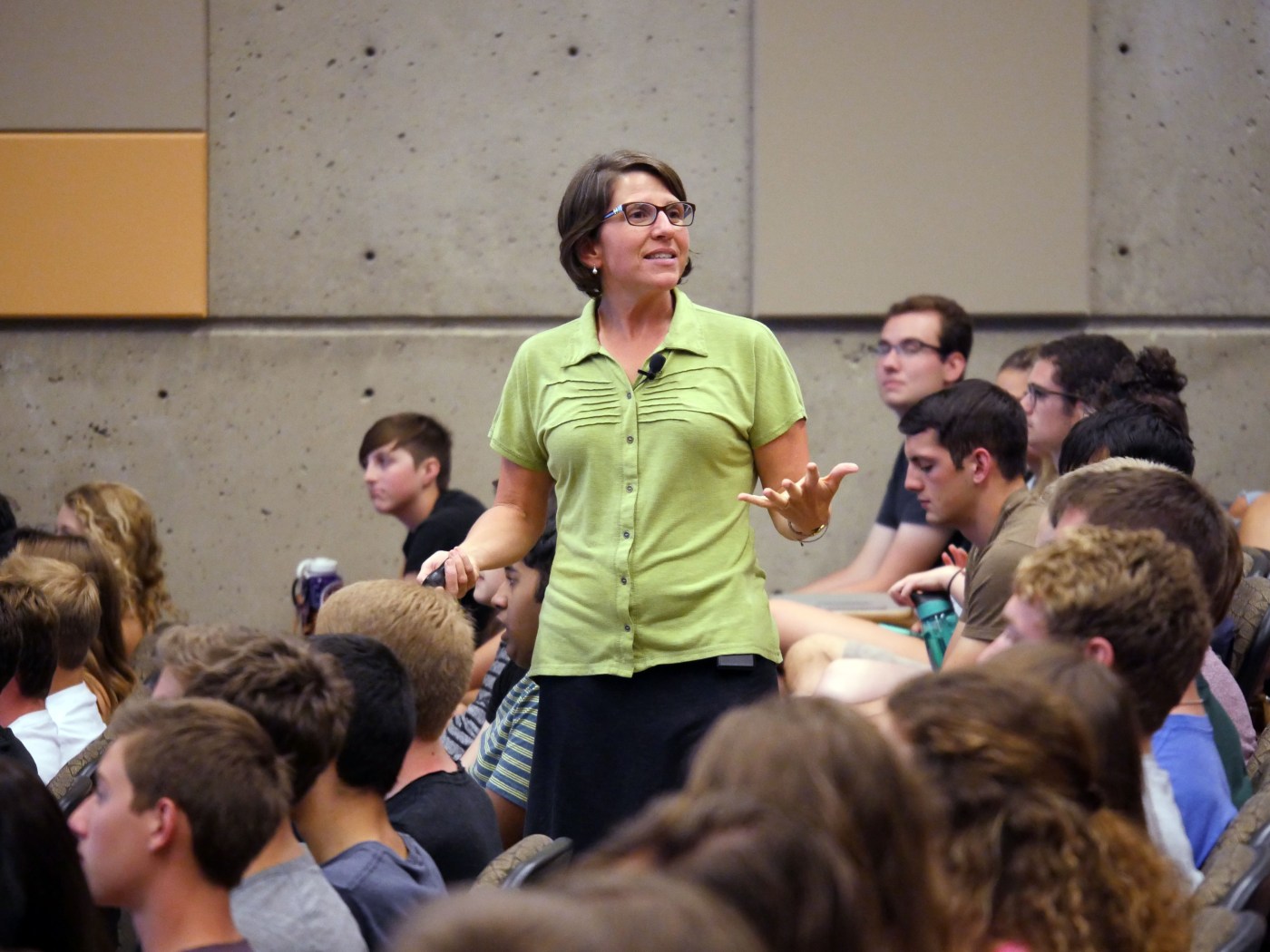 Each new student who enrolls at the University of Colorado Boulder takes an online course and in-person training related to sexual assault.

Officials say the university has made “significant progress” in improving campus climate on sexual assault prevention. However, some argue there’s still room for improvement.

“My biggest argument is that it’s just not enough,” said Teresa Wroe, deputy Title IX director and senior director of education and prevention in the Office of Institutional Equity and Compliance.

But, Wroe said, mandating continuing education on the subject isn’t effective. The office has to strike a balance between “enough” and “too much.”

To improve prevention without making students resentful and bored through excessive training sessions, Wroe said they are now looking at the issue of belonging on campus.

The more “that we can build a sense of connection and community up front, as soon as students land here,” the better, she said.

According to Donna Freitas, a researcher and speaker on sexuality on college campuses and author of “Consent on Campus: A Manifesto,” integrating the issue of consent into a college’s culture is the best way to make effective change.

“What I wish schools would do, aside from bystander education and the bare minimum that they do, is I wish they would really think about how could we really change our students’ relationship to sex and their self-understanding as sexual beings,” Freitas said.

To do so, Wroe said, would take a cultural shift at the university. While her office is focused on preventing sexual assault, the rest of the university has to be part of the answer as well.

“We’re not built and equipped for that as an institution,” she said.

For example, Wroe wanted to train other people to be facilitators for trainings, as there are only two people in her office trained do so right now. The general response was people felt it wasn’t their jobs, she said.

Residence Life is incorporating sexual assault prevention into its curriculum and reinforcing bystander intervention messages in the halls with the help of Wroe’s office, she said. The “danger” is that people could “easily undermine” the message Wroe wants to put out by using incorrect language.

CU Boulder also was featured in the 2017 Association for American Universities Campus Activities Report for its “Don’t Ignore It” campaign, which was launched in 2016 following a 2015 sexual misconduct survey administered to all students. The campaign encouraged students to look at a website that provides reporting options, bystander intervention, talking with friends about trauma and how to create a buddy system.

The Office of Institutional Equity and Compliance was planning another survey for this year, but that has been delayed until fall 2020 because this year the Board of Regents planned to issue a climate survey systemwide.

About 71% of sexual assaults at CU Boulder cluster in the fall of freshmen year, according to Wroe.

“There are some big vulnerabilities from having such a significant transition in life,” she said.

They also gather in groups of about 400 to receive bystander intervention training. Wroe said the framework of that training is valuable because it makes students imagine something happening to a friend, making the content more relevant. It takes away the “moral component,” she said, which can be ineffective because students get defensive when they think of themselves as the victims or perpetrators.

The curriculum of the training is research-based, Wroe said, and whittled down to the most effective pieces that can be delivered in an hour.

While there are other freshmen trainings centered around topics like alcohol that also include pieces of consent training, Wroe said that “from there on out, there are fewer and fewer options.”

But, to address the “vulnerabilities” students face in their first year, Wroe is trying to build more community. Students need interventions “as they land,” such as options for socializing outside of the party scene, she said. The 2015 survey also found most people tell a friend when they are sexually assaulted, so Wroe and the Office of Victim Assistance provide information on how to support friends.

“Research suggests that students with a strong commitment to stick together throughout an evening of party-going are less likely get separated from each other or leave friends behind in high-risk situations, thereby reducing the likelihood of harms such as physical injury and sexual assault,” she said. “Going forward, we will explore and evaluate whether programs aimed at building a greater sense of belonging and stronger social connections among first-year students can lead to lower rates of nonconsensual sexual contact and reduce the risk of sexual assault.”

Since 2014, the university created the Office of Institutional Equity and Compliance, began training departments on improving climate, created a sexual misconduct rapid response team, and more.

While some recommendations from the 2015 survey, like requiring education for returning students, haven’t come through, others are progressing in the various strategic initiatives the university is undertaking, like Academic Futures.

The Daily Camera requested interviews with people Wroe mentioned, such as members of the Academic Futures committee and those who would make the decision to implement more education, but CU Boulder spokesman Ryan Huff said he didn’t see why those interviews were relevant.

In a follow-up interview requested by the university, Wroe cited an increase in reporting numbers that could signify an increase in awareness of resources.

“I think the body of research on this particular issue continues to be developed, but we do know that there are a few elements that are very important,” she said. Those include the effectiveness of bystander intervention training, the importance of ongoing training and awareness, and getting feedback or data on what’s an issue and what training is working.

Freitas, the author who writes about consent, said she thinks online training is “unbelievably ineffective.” But she thinks bystander intervention is positive and forces students to think about their roles in the community.

“I think what’s really problematic, though, about those trainings, even though I understand why schools would resort to them, is you can’t be effective when you herd 2,000 students into a theater,” she said. “What I wish schools would do, aside from bystander education and the bare minimum that they do, is I wish they would really think about how could we really change our students’ relationship to sex and their self-understanding as sexual beings.”

Freitas sees consent as part of the “big picture questions,” like who someone wants to be as a person. That kind of conversation can’t happen in a one-hour session, she said.

However, she believes universities have the resources to try this model.

“One of the best resources universities have is the classroom,” she said. “Universities are where we ask these really hard questions, where we try to reinvent the wheel.”

Sexual assault and consent are systemic issues, like race, she said, and universities should lead the way in confronting those kinds of issues. To do so, professors would need to incorporate those kinds of conversations in their classes.

Instead of framing consent as a punishment, it could be framed as ethics, she said. Ethical conversations and critical thinking lessons could be integrated into first-year seminars and classes, for example, and then students could think about those things in relation to consent.

“I know that sounds like a tall order, but I really don’t believe it is,” Freitas said. “Already on syllabi across universities, professors are teaching the kinds of questions and the kinds of resources that are really useful for students to be thinking about this in a broad way.”

It’s a matter of finding those professors who are teaching in that way and getting them to sign on to the idea of incorporating consent, she said. Many faculty want to do this, according to her, but they are afraid of getting into trouble.

“Universities have to decide to prioritize it not just in terms of, I think it requires funding, but it also requires universities deciding to empower the faculty to be involved and I don’t see that happening yet,” she said.

Hedgepeth also said universities need to include students in these discussions, which would increase the buy-in to the programs..

“I hope that universities think of these initiatives, not as something to impose on students, but to build with students,” she said.