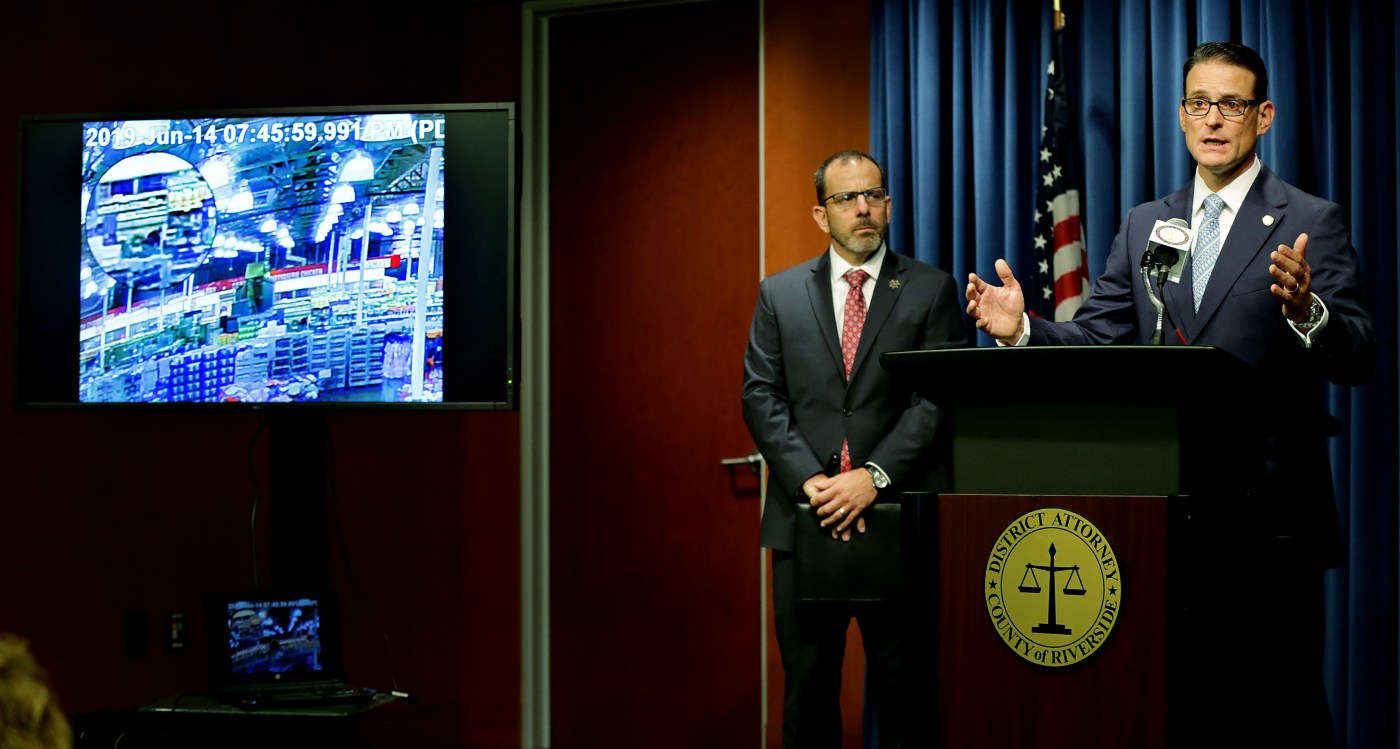 RIVERSIDE — Several dozen people protested outside the Riverside County District Attorney’s Office on Wednesday, demanding that the region’s top prosecutor reconsider his decision not to file criminal charges against an off-duty Los Angeles police officer who fatally shot a developmentally disabled man and wounded his parents during a confrontation in the Costco warehouse store in Corona.

“Mr. (Mike) Hestrin doesn’t need a grand jury to file charges,” Benjamin Wood, a co-organizer of the downtown Riverside demonstration that at one point drew more than 50 people, told City News Service. “I think the fact that the guy was a police officer is why he’s getting favorable treatment. This is not the way a civilian would have been treated.”

Wood and others gathered outside the D.A.’s headquarters shortly after 10 a.m., forming a mobile demonstration, with people coming and going over the course of two hours as participants walked around the civic center, using Orange, Lime, Ninth and 10th streets.

The activists hoisted signs with pictures of 32-year-old Kenneth French, who was shot four times by off-duty LAPD Officer Salvador Sanchez on the night of June 14. French’s mother and father were also struck by gunfire.

The protesters held up signs from the Sept. 25 news briefing in which Hestrin announced that he would defer to a grand jury decision not to indict Sanchez, with no criminal filing whatsoever.

One sign said, “Shot In the Back.” Another read, “Indict the `Costco Killer,’ LAPD Cop Salvador Sanchez,” while another stated, “Justice for Kenneth French.”

“I think Mr. Hestrin created a pretext not to file charges by going to the grand jury,” Wood told CNS. “Maybe he was testing the waters to see whether he could get a conviction. It’s also a way to cover up the truth, because without a trial, everything stays hush-hush.”

He told reporters last month that he took the case to the 19-member criminal grand jury because he felt it was necessary to conduct a comprehensive inquiry. A dozen votes were needed for an indictment against Sanchez, and that didn’t happen.

Hestrin said then that he respected the grand jury’s determination, emphasizing that “we had to put our passions and emotions aside and marry the facts with the law.”

The D.A. denied Sanchez had been favored with “special treatment” because he’s a law enforcement officer.

“This is viewed as an officer-involved shooting,” he said. “Police officers have to respond (to an attack) as if they’re on duty.”

The French family attorney, Dale Galipo, has put the city of Los Angeles and the LAPD on notice of his intent to file a federal civil rights lawsuit seeking unspecified damages. A criminal attorney, Greg Salnick, is also reviewing the matter for the family to see whether a federal criminal case might be brought against Sanchez, according to Galipo.

He said on Sept. 26 that he was “not surprised” by the lack of an indictment and Hestrin’s decision to forgo filing charges.

“If this had been anyone other than a police officer, that individual would’ve been arrested and charged in 48 hours,” the attorney said.

According to Corona police and security surveillance video camera footage that partially captured the confrontation, for reasons unclear, Kenneth French shoved Sanchez to the floor of the store while waiting in line for food samples. The off-duty policeman was holding his 18-month-old son at the time.

His attorney, David Winslow, said his client momentarily blacked out after being pushed down, but Hestrin said there was no evidence of that. However, the D.A. said the off-duty lawman later told investigators that he thought he’d been shot in the back of the head.

Russell French can be seen on the video intervening and turning his son away from the area, increasing the distance between him and Sanchez, who unleashed 10 rounds from his pistol. French told reporters that he “begged” Sanchez not to shoot in the four seconds that elapsed between the push and the gunfire.

Kenneth French suffered a gunshot to the shoulder and three to the back. He died at the scene. His father was wounded in the abdomen, resulting in the loss of a kidney, and his mother was shot in the back.

Kevin French emphasized that his older brother, a diagnosed schizophrenic, and his parents were unarmed.

“They were moving away from this officer,” the young man said. “They had their backs turned. None of them were posing an imminent threat … D.A. Hestrin is giving someone with a badge a permit to shoot without consequences or accountability.”

Sanchez is on paid administrative leave with the LAPD, where he has been a patrolman for seven years, most recently assigned to the Southwest Division.