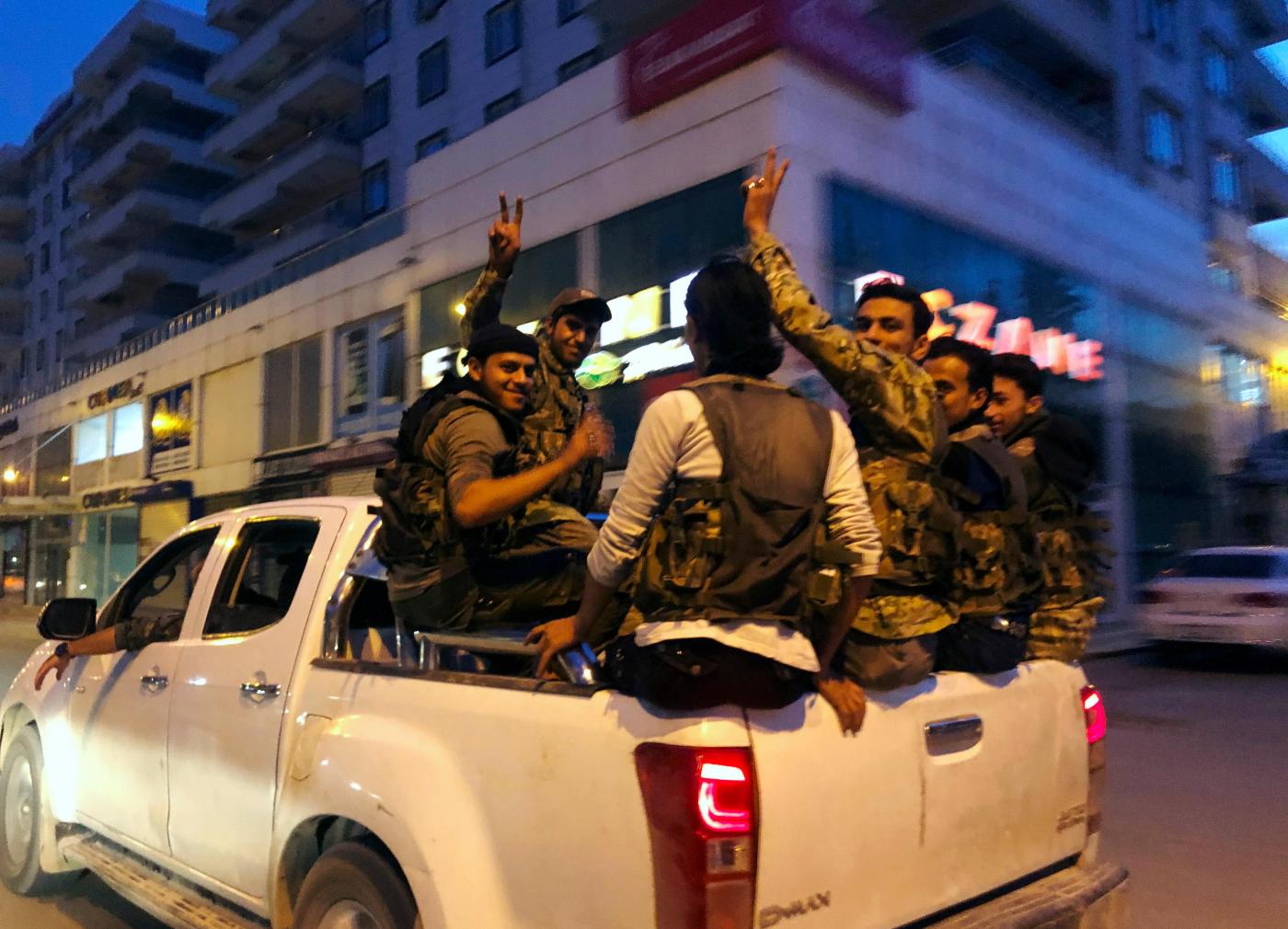 By LEFTERIS PITARAKIS and BASSEM MROUE

CEYLANPINAR, Turkey — Russia moved to fill the void left by the United States in northern Syria on Tuesday, deploying troops to keep apart advancing Syrian government and Turkish forces. At the same time, tensions grew within NATO as Turkey defied growing condemnation of its invasion from its Western allies.

Now in its seventh day, Turkey’s offensive against the Kurds has upended alliances and is re-drawing the map of northern Syria for yet another time in the 8-year-old war.

Russia moved quickly to further entrench its role as a power broker after President Donald Trump ordered the pullout of American forces in northeastern Syria. The American move effectively abandoned the Kurdish fighters who were allied with the U.S. and cleared the way for Turkey’s invasion aimed at crushing them.

Desperate for a new protector, the Kurdish administration struck a deal with the Russia-backed government of Syrian President Bashar Assad, whose forces on Sunday began moving into Kurdish-administered areas to shield them against Turkey.

Video by Russian journalists traveling with the troops showed what appeared to be an abandoned outpost where U.S. forces had been stationed in Manbij, a flashpoint town west of the Euphrates River that Turkey has long wanted to wrest from the Kurds. Syrian troops waved flags in the streets.

A U.S. military spokesman, Col. Myles B. Caggins, confirmed American soldiers had pulled out of Manbij. U.S. troops have had outposts there since 2017, when they went in to avert a looming battle between Turkish and Kurdish fighters over the town.

“No one is interested” in fighting between Syrian government troops and Turkish forces, Moscow’s envoy for Syria Alexander Lavrentyev told Russian state news agencies. Russia “is not going to allow it,” he said.

Kurdish leaders and representatives of the Syrian government held talks at a Russian military base last week, Lavrentyev said, adding that he was unaware of any results.

Russia has been a staunch ally of Assad for decades and entered the Syrian conflict in 2015, providing air cover that eventually turned the tide of the war in his favor. The Russian military has shipped weapons to Damascus, trained thousands of troops and put its advisers in key Syrian military units. Several hundred Russian contractors also have reportedly fought alongside Syrian government troops, but their role in Assad’s offensives does not appear to be significant.

In the first week of the Turkish assault, at least 154 fighters from the Kurdish-led Syrian Democratic Forces have been killed, as well as 128 fighters from Turkish-backed Syrian factions , according to the Syrian Observatory for Human Rights, a monitor of the war. It said at least 69 civilians have been killed in Syria. Turkey says six of its soldiers have died, as well as at least 20 Turkish civilians killed by Kurdish mortar fire across the border.

Two Turkish soldiers and seven others wounded in a mortar attack from Manbij, according to the Turkish Defense Ministry. The Turkish military retaliated with an assault that “neutralized” an estimated 15 Syrian Kurdish fighters, the ministry added.

An Associated Press team later saw up to 200 Turkish troops along with armored vehicles crossing into Syria by Jarablus, the border town closest to Manbij and Kobani, another Kurdish-held town that is not yet secured by Syrian forces.

Farther east along the border, Kurdish fighters battled to retake Ras al-Ayn, a town captured by Turkish forces days earlier. An AP journalist reported heavy Turkish bombardment of targets in the countryside around it. The Syrian Observatory reported that Syrian Kurdish fighters had retaken the town, but it appeared it was still being contested.

The move by Russian and Syrian troops alongside the Kurdish forces came as Washington tried to restrain fellow NATO member Turkey.

Trump on Monday announced sanctions aimed at Turkey’s economy. The United States called on Turkey to stop the offensive and declare a cease-fire, while European Union countries moved to broaden an arms sale embargo against their easternmost ally.

Trump was sending Vice President Mike Pence and national security adviser Robert O’Brien to Ankara to try to begin negotiations over a stop to the fighting. Pence said Trump spoke directly to Turkish President Recep Tayyip Erdogan, who promised not to attack the border town of Kobani, which in 2015 saw the Islamic State group’s first defeat in a battle by the U.S.-backed Kurdish fighters.

Erdogan defended Turkey’s offensive in a column in the Wall Street Journal, calling on the international community to support Ankara’s effort to create what it calls a resettlement “safe zone” for refugees in northeastern Syria, or “begin admitting refugees.”

“Turkey reached its limit,” Erdogan wrote of the 3.6 million Syrians in his country. He said Turkey’s warnings that it would be unable to stop refugee floods into the West without international support “fell on deaf ears.”

Turkey said it invaded northern Syria to create a zone of control the entire length of the border and drive out the Kurdish fighters, which it regards as terrorists because of their links to Kurdish insurgents in Turkey.

Instead, after the Kurds’ deal with Damascus, a new de facto carving up of the border appeared to be taking shape.

Turkish forces control the beginnings of a truncated zone roughly in the center of the border about 100 kilometers (60 miles) long between the towns of Tel Abyad and Ras al-Ain.

Syrian government troops were moving into or increasing their presence in the regions on either side of that enclave, including Manbij to the west and the cities of Qamishli and Hassakeh in the far northeastern corner of Syria.

With their deal with Damascus, the Kurds risk losing the virtual self-rule they have enjoyed across the northeast — the heartland of their minority community — ever since Assad pulled his troops out of the area seven years ago to fight rebels elsewhere. They are hoping, perhaps with Russian mediation, to reach a final deal that would preserve some degree of that autonomy.

But they gain protection: So far, Turkey appears reluctant to clash with Syrian forces wherever they move in. The Turkish-led forces continue to fight for places held solely by the Kurds.

The U.N. humanitarian aid coordinator said at least 160,000 civilians in northeastern Syria have been displaced amid the Turkish operations, mostly from Ras al-Ayn and Tal Abyad, where people are fleeing south.