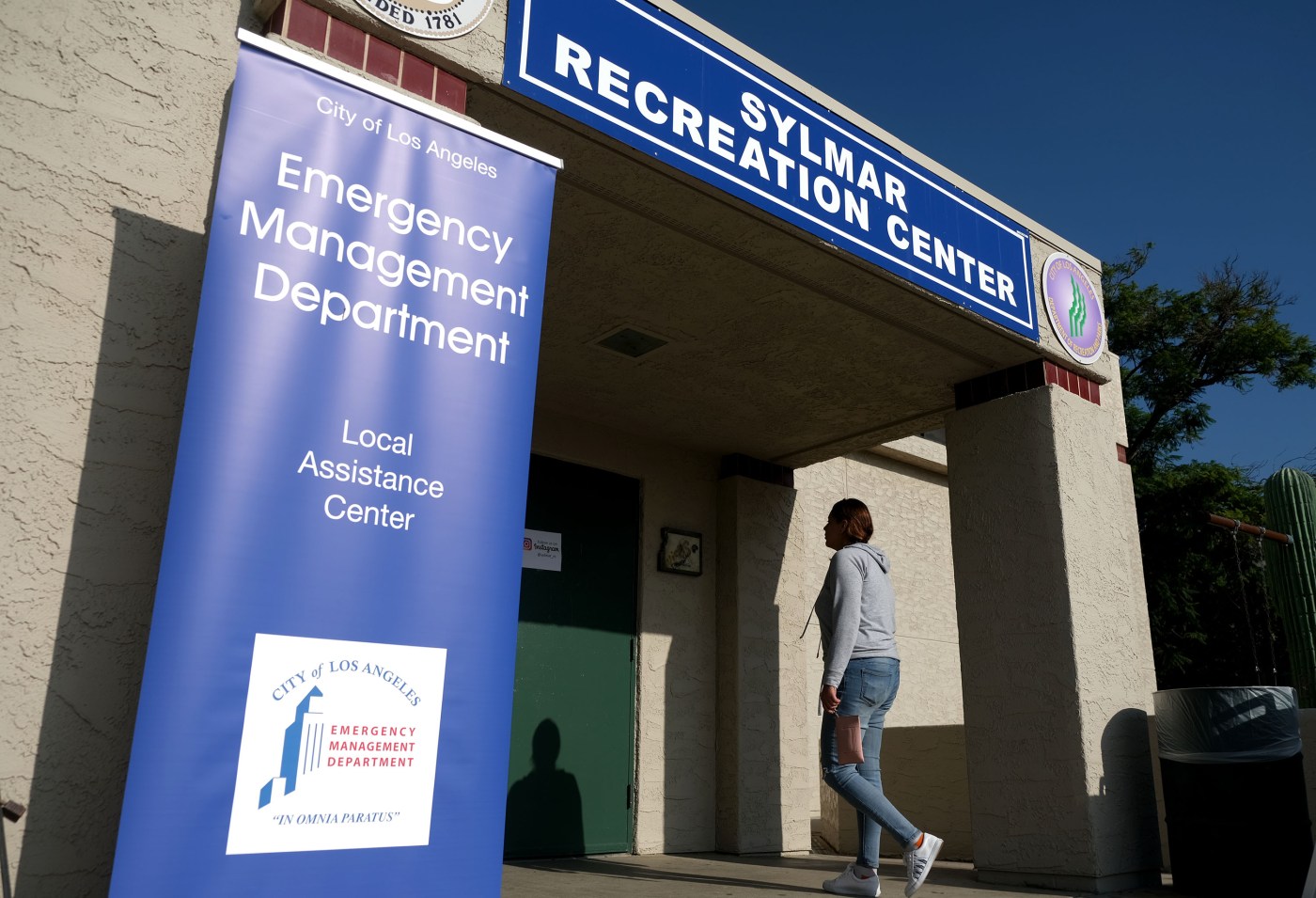 About a week after the Saddleridge fire upended their lives, a handful of the fire’s victims took their first steps toward getting back to normal on Thursday.

This was the first day city and county officials opened the disaster assistance center at the Sylmar Recreation Center, not far from where the now 8,391-acre fire began on Thursday, Oct. 10.

About two hours after the center opened at 9 a.m., a few residents had trickled in, sitting quietly with workers at different booths set up around the recreation center’s main basketball court.

Lucy Mascorro, 66, lives in Sylmar, about a mile and a half from where the fire ignited.

For days, her backyard was buried under a layer of ash. Her house reeks of smoke — when she returned after the fire moved north, she opened her front door “and smoke just poured out,” she said.

She needs help getting it all cleaned up.

“The pool, it’s all filled with ashes,” she said. “I just swept it all. It took two days.”

Dozens more victims could pass through the disaster assistance center at 13109 Borden Avenue over the next few weeks. The center will stay open — from 9:30 a.m. to 7 p.m. weekdays and 8 a.m. to 4 p.m. Saturdays — as long as victims need help.

The Saddleridge fire was still smoldering Thursday. The Los Angeles Count Fire Department said in an update that the blaze was 56% contained, with firefighters having dug trench lines around more than half of the burn area to stop its progress.

Victims can get help there replacing lost records, filing insurance claims, getting clean-up and rebuilding assistance, and applying for financial help.

Even with help from the county getting their building permits processed, it could take weeks — or even months, or longer — for people who’ve lost entire homes to start the rebuilding process.

Many of the workers at the assistance center Thursday said they also had worked with victims of the Woolsey fire that burned through Agoura Hills and Malibu in 2018. Some homeowners there only just began rebuilding homes recently.

First, properties must be cleared of mounds of debris and ash. The grounds also must be swept of toxic chemicals. Homeowners then have to submit their building plans to the Department of Building and Safety to get approved.

The Saddleridge fire destroyed 18 buildings, and charred another 88. Hundreds more likely have some amount of some damage.

Most victims, like Mascorro, will just need help refurbishing their homes to remove the smell of smoke. A few will need help rebuilding much of their lives after they were upended by the fire.

“There’s so much damage,” said Christy Schleicher, 49, who lives at the hillside Legends at Cascades housing development, just on the other side of a ravine from the Saddle Ridge Road area of Sylmar. “It looks like a war zone.”

Schleicher said her unit was yellow-tagged — she can get back in, but she can’t live there for now.

Fire tore through the condo on Thursday. It didn’t burn down, but flames and smoke destroyed all of her belongings and destabilized a central beam in her roof.

Standing outside the assistance center, she drew a diagram of how the flames surrounded the group of five condos where she lives.

“All of this is gone,” she said, scratching out a u-shaped area of vegetation around the development. “All of this is black and charred. It’s just devastated. I do not know how they were able to keep this structure safe from the walls of fire.”

Helen Chavez is an assistant director of the L.A. County Office of Emergency Preparedness. She said many of the victims who will come to the center have fled their homes in terrifying circumstances. For that reason, she tries to direct them to the county’s Department of Mental Health booth.

She said “constantly under-recognized” is the need for help coping with the trauma of losing a home or being forced out in an evacuation.

“If you kind of have these feelings of anxiety, and you’re not sure why, it could be related to the stress, the trauma,” she said. “It’s a constant stress, commensurate with the level of loss you experienced.”