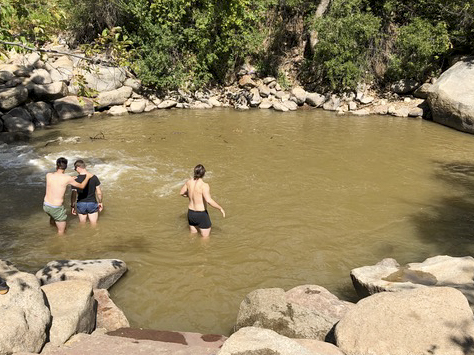 State health officials have inspected the ongoing road improvement project in Boulder Canyon in response to an activist’s complaint raising concerns about the adequacy of erosion control measures to protect Boulder Creek. Those officials said they found some “corrective action” items that need to be addressed “immediately.”

The complaint came in the wake of observations made by members of Boulder Waterkeeper, an advocacy group which has been vocal much of this year on issues pertaining to the overall health of Boulder Creek.

In this case, Boulder Waterkeeper member and local flyfishing guide Wallace Westfedlt took photographs Sept. 7 which showed an apparent high level of sediment in the creek at Eben Fine Park.

Also, the complaint received by state health officials on Sept. 9, stated “On 9/8/2019 a drive-through of the construction area showed poor erosion control measures being instituted by the contractor with large amounts of open exposed sediment near Boulder Creek.”

The complaint stated “It is apparent that erosion control measures are not adequate as per the CDPHE General Stormwater Permit requirements.”

Pete Sewczak, president of Zak Dirt, the lead contractor on CDOT’s $31 million road improvement project in Boulder Canyon, told the Camera after the complaint was filed, “We are not doing anything to contribute any sediment at this time. All our best management practices are in place. We are checking every day.”

On Tuesday, state health officials notified Zak Dirt that a compliance check in response to the Boulder Waterkeeper complaint would be conducted on Wednesday, looking specifically at compliance with the contractor’s construction stormwater permit.

“The division did identify some corrective action items and has provided those to the permittee with the expectation that they be addressed immediately,” the CDPHE reported late Friday. “A final inspection report will also be drafted and sent to the permittee and will be available to the public” on the state’s website.

Additionally, the statement said, “In general, the department inspectors observed that Zak Dirt and Colorado Department of Transportation did act diligently to address the potential for erosion and sediment releases to Boulder Creek associated with this large construction project. The scope and scale of the findings from this inspection did not rise to the level that requires a written response from the permittee and the department determined that no further division action or oversight for this project will be necessary at this time.”

Friday, Boulder Waterkeeper spokesman and retired environmental engineer Art Hirsch, who is the named complainant prompting this week’s compliance inspection, welcomed the news the inspection had been conducted.

“I am glad that CDPHE took the complaint seriously and went to the SH 119 site to review and inspect the erosion control status and compliance to the Zak Dirt’s General Construction Stormwater Permit and Stormwater Management Plan,” he said in an email.

“I believe the pictures provided in the Boulder Waterkeeper complaint to CDPHE showed exposed soils along the right of way and construction area that were a potential sources of sediment entering Boulder Creek last week.”

Zak Dirt did not respond to a request for comment late Friday.