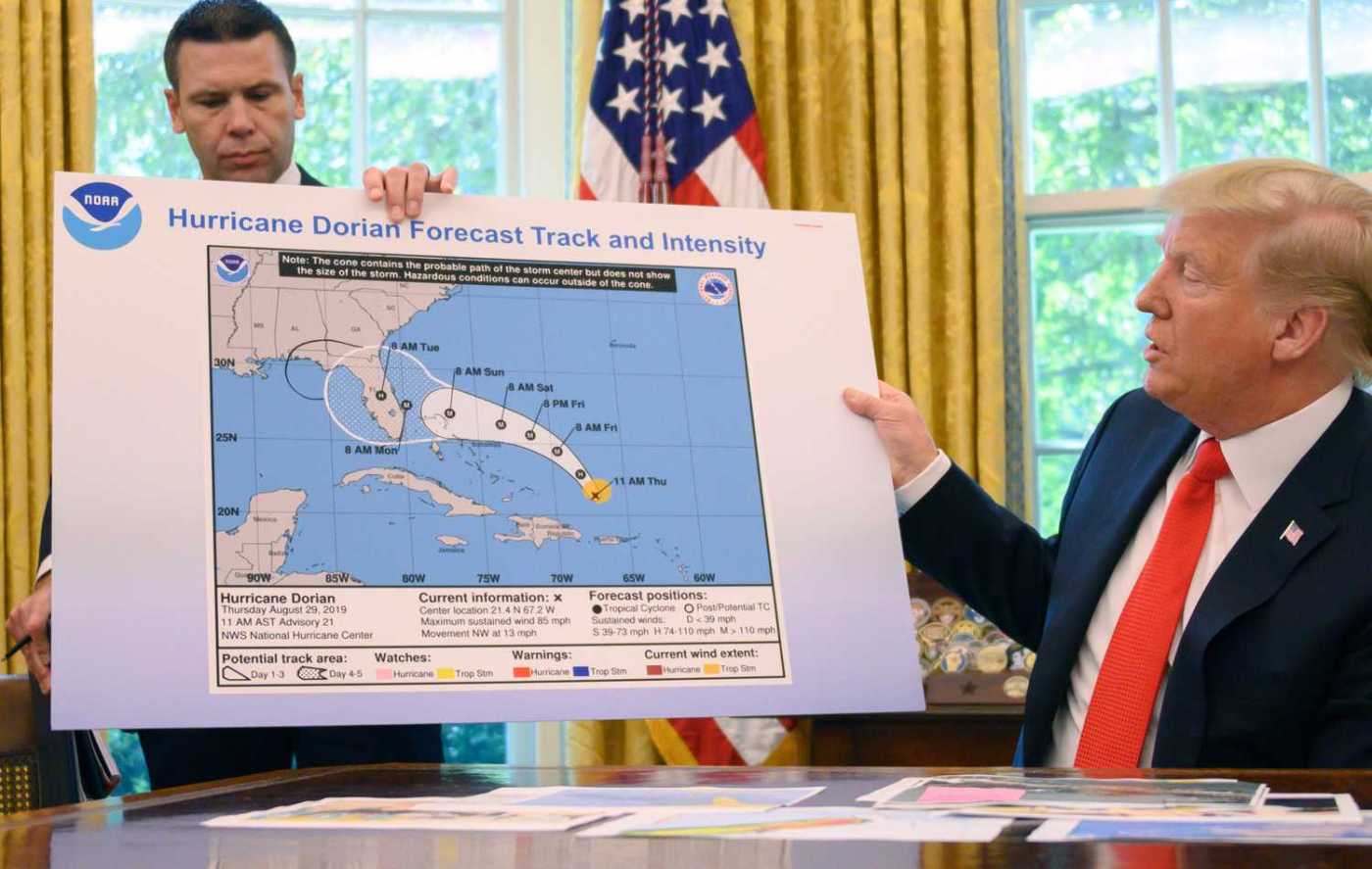 The political hurricane stemming from Sharpiegate, in which President Donald Trump reportedly used a black marker to alter a map of the potential path of Hurricane Dorian, has seen the outer bands of its turmoil reach Boulder.

National Weather Association Director Louis Uccellini has come to the defense of Birmingham, Ala., forecasters who tweeted out correct information about Hurricane Dorian after Trump wrongly predicted — and backed up his Twitter comments with an altered NWS map — that the storm that savaged Bermuda posed a threat to Alabama.

Uccellini did so this week at the ongoing meeting of the National Weather Association, coincidentally being held in Alabama, telling the Associated Press “They did that with one thing in mind: public safety.”

The meeting also is being attended by Boulder-based National Weather Service forecaster Paul Schlatter, president of the National Weather Association, with a national membership of over 2,200. He also backs up the actions of the Birmingham forecasters.

Reached in Huntsville, Ala., Tuesday, Schlatter, a Boulder native who also is  science and operations officer for the NWS in Boulder, said “Our duty is to forecast the weather and message the impacts of the people who can make the right decision. It’s all about public safety.

“If any office starts to see social media posts or phone calls that don’t match our forecasts, they’re getting incorrect information from somewhere. It’s our duty to set that straight, because we are the official source of watches, warnings and (alerts for) public safety. Any office would have jumped on that right away.”

‘Not based on science’

According to Uccellini, the Birmingham forecasters were not initially aware that Trump was behind reports that Alabama was at risk from the storm, and were surprised to be hit with a barrage of phone calls and social media contacts after the presidential tweet, which did not reflect updated information concerning the storm’s expected path.

Trump had, on Sept. 1, tweeted that “In addition to Florida – South Carolina, North Carolina, Georgia, and Alabama, will most likely be hit (much) harder than anticipated.”

There had been a forecast from the National Oceanic and Atmospheric Administration, parent agency to NWS, two days earlier, that showed a tiny portion of southeastern Alabama could be affected by Dorian. But those forecasts had been revised by the time of Trump’s tweet, eliminating Alabama from the so-called “cone of uncertainty.”

On Sept. 4, from the Oval Office, Trump displayed a NOAA forecast from the morning of Aug. 29 which featured a heavy black line that put the forecast path well into Alabama. The Washington Post and others have since reported that it was Trump himself who altered the map just prior to the Sept. 4 Oval Office briefing.

The Department of Commerce oversees both NOAA and NWS, and Commerce Secretary Wilbur Ross is reported to have threatened firings at NOAA for issuing forecasts contradicting the president’s comments, although a Commerce spokesman has denied that happened. And Friday, NOAA issued an unsigned statement labeling the Birmingham office’s statement as “inconsistent with probabilites from the best forecast products available at the time.”

That prompted Craig McLean, acting chief scientist of NOAA’s Oceanic and Atmospheric Research division, to send an agency-wide email Sunday night. In it, he decried the politicizing of weather forecasting.

“My understanding is that this intervention to contradict the forecaster was not based on science but on external factors including reputation and appearance, or simply put, political,” McLean wrote.

“Our NOAA Scientific Integrity Policy and Code of Scientific Conduct make clear that all NOAA employees shall approach all scientific activities with honesty, objectively, and completely, without allegiance to individuals, organizations, or ideology.  The content of this press release is very concerning as it compromises the ability of NOAA to convey life-saving information necessary to avoid substantial and specific danger to public health and safety. If the public cannot trust our information, or we debase our forecaster’s warnings and products, that specific danger arises.”

Also on Tuesday, a spokesperson for the Commerce department’s inspector general confirmed the circumstances surrounding the unusual statement, and reported threats of firings, are “under review.”

U.S. Rep. Joe Neguse, D-Bolder, issued this statement late Tuesday: “The threats by Secretary Ross to fire NOAA officials if they failed to back the President’s inaccurate statements on Hurricane Dorian are deeply troubling. Censorship and politicization of science is incredibly dangerous and we won’t stand for it.”

Citing Boulder as home to world-renowned federal labs, research, and scientists, Neguse said, “If these reports are true, Secretary Ross needs to resign.”

Waleed Abdalati, director of Boulder’s Cooperative Institute for Research in Environmental Sciences, said the episode “leaves me feeling sad, because you have people who are literally civil servants and those people, like the people in my organization who support them, are working hard to do service to this nation. They are trained experts, very competent people, and people’s lives can depend on the quality of the information they provide.”

The people at the eye of this political storm, Abdalati said, are “very talented, knowledgeable committed people. People are working very hard to protect life and property through accurate forecasts. That is all that motivates them, and when challenged on grounds that are not scientific, and not rooted in science, it’s really a disservice to their hard work and the taxpayers’ investment.”

Boulder-based meteorologist Bob Henson, who writes for Weather Undergound, which is part of IBM, exclaimed on Facebook in reaction to the altered map, “O.M.G,” and reposted a colleague’s observation that “It is a violation of federal law to falsify a National Weather Service forecast and pass it off as official, as President Trump did here,” including the federal statute which calls for a fine and up to 90 days in jail, or both, for those guilty of doing so.

Henson, in an interview, said, “I’ve never seen anything like this in 30-plus years in meteorology. I would say the most worrisome aspects are comments in social media from folks implying they don’t trust NOAA as much as they once did.

“If that were a widespread feeling, that would be really be troublesome. With social media it is hard to tell just how widespread those feelings are. But comments like that have popped up.”

Henson on Sept. 2 authored a joint post with Jeff Masters for Weather Underground which commented on Trump’s comment on Sept. 1, made the same day he tweeted about the purported danger to Alabama, that  “I’m not sure I’ve ever even heard of a Category 5″ — despite the fact that Trump had publicly commented about Category 5 storms at least twice before, once during Hurricane Irma in 2017 and again during Hurricane Michael in 2018.

“Troublingly, since the president is in charge of ordering disaster relief in the wake of a hurricane, his Category 5 misconceptions could lead to a slowing or misallocation of resources,” the post stated.

Henson said in an interview the bottom line on the Trump’s forecasting follies is that timing is everything.

“You can’t just say Alabama was at risk,” Henson said. “When was Alabama at risk and what was the trend on that? To understand what was going on, you have to look at how the risk was changing and evolving.