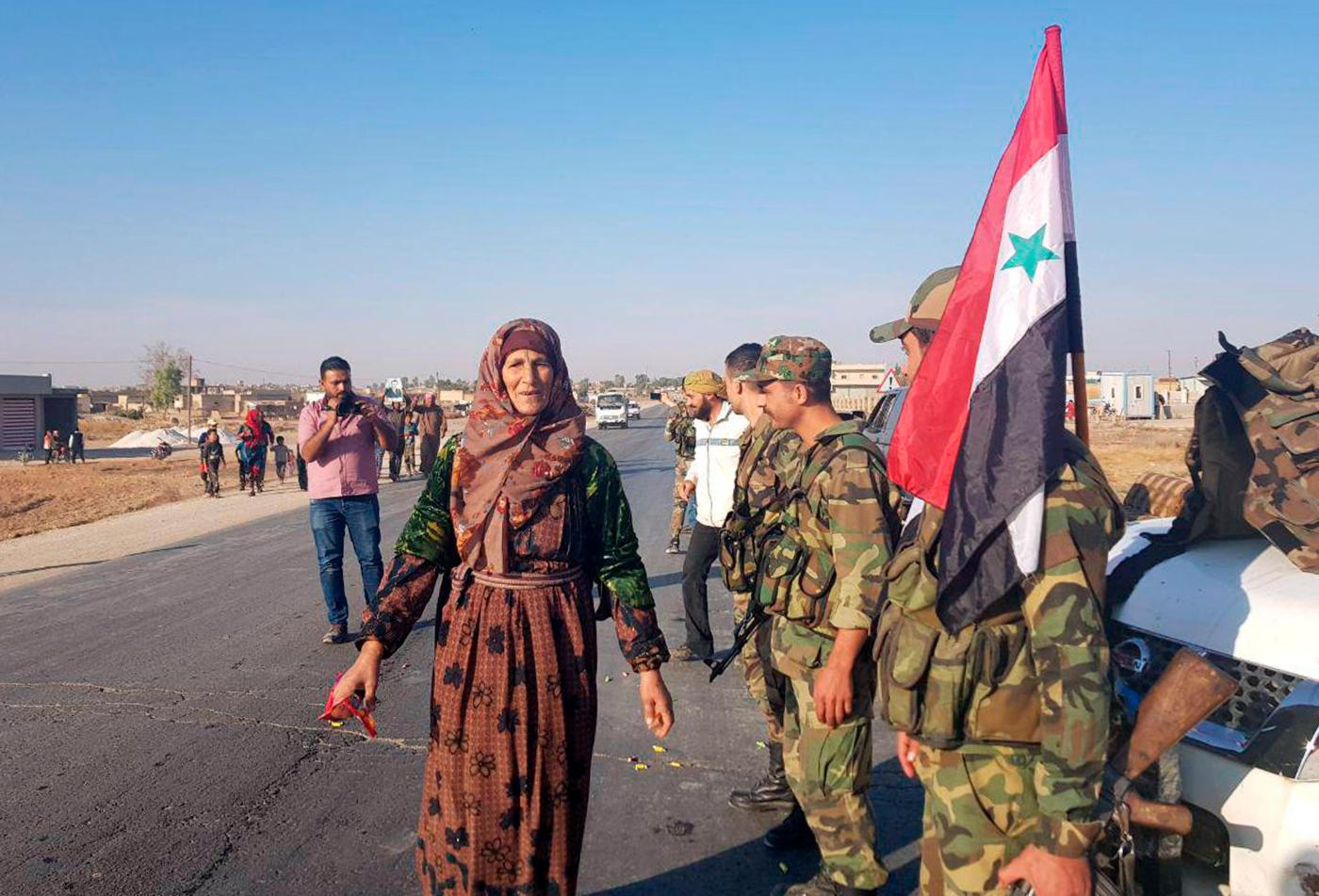 By MEHMET GUZEL and BASSEM MROUE

AKCAKALE, Turkey — Syrian government troops moved into towns and villages in northern Syria on Monday, setting up a potential clash with Turkish-led forces advancing in the area as long-standing alliances in the region begin to crumble following the pullback of U.S. forces.

The Syrian military’s deployment near the Turkish border came after Syrian Kurdish forces previously allied with the U.S. said they had reached a deal with President Bashar Assad’s government to help them fend off Turkey’s invasion, now in its sixth day.

Assad’s return to the region his troops abandoned in 2012 at the height of the Syrian civil war is a turning point in Syria’s eight-year civil war, giving yet another major boost to his government and its Russian backers and is like to endanger, if not altogether crush, the brief experiment in self-rule set up by Syria’s Kurds since the conflict began.

The fast-deteriorating situation was set in motion last week, when U.S. President Donald Trump ordered American troops in northern Syria to step aside, clearing the way for an attack by Turkey, which regards the Kurds as terrorists. Since 2014, the Kurds have fought alongside the U.S. in defeating the Islamic State in Syria, and Trump’s move was decried at home and abroad as a betrayal of an ally.

In the past five days, Turkish troops and their allies have pushed into northern towns and villages, clashing with the Kurdish fighters over a stretch of 200 kilometers (125 miles). The offensive has displaced at least 130,000 people.

Abandoned in the middle of the battlefield, the Kurds turned to Assad and Russia for protection and announced Sunday night that Syrian government troops would be deployed in Kurdish-controlled towns and villages along the border with Turkey to help repel Turkish advances.

“We are going back to our normal positions that are at the border,” said a Syrian officer, as embattled Kurdish authorities invited the government to retake towns and villages in the north.

Syrian troops arrived Monday in the northern province of Raqqa aboard buses and pickup trucks with mounted machine guns. Troops moved into the towns of Tal Tamr, about 20 kilometers (12 miles) from the Turkish border, Ein Issa and Tabqa, known for its dam on the Euphrates River and a nearby air base of the same name.

The government deployment sets up a potential clash between Turkey and Syria and raises the specter of a resurgent Islamic State group as the U.S. relinquishes any remaining influence in northern Syria to Assad and his chief backer, Russia.

Turkey has pressed on with its invasion of northern Syria, warning its NATO allies in Europe and the United States not to stand in its way.

Turkish President Recep Tayyip Erdogan signaled his military was ready to launch an assault on the Kurdish-held region of Manbij, on the western flank of the Euphrates. The flashpoint area housed U.S. troops who patrolled the region since 2017 to deter a confrontation between Turkey and Kurdish fighters.

A U.S. official said Monday troops were still the town, preparing to leave.

“We are about to implement our decision on Manbij,” Erdogan told reporters, adding that Turkey aimed to return the city to Arab populations that he said were its rightful owners.

Turkish forces were already positioned at the city’s edge, according to CNN-Turk. Syrian troops already have a presence south of Manbij.

Erdogan has already said Turkey will not negotiate with the Syrian Kurdish fighters, saying they have links to a long-running Kurdish insurgency within its own borders.

Heavy fighting there on Sunday reached a Kurdish-run camp for displaced persons in Ein Issa. The camp is home to about 12,000 people, including around 950 wives and children of IS fighters, and hundreds are believed to have escaped amid the chaos.

Photos posted by SANA showed several vehicles and a small number of troops in Tal Tamr, a predominantly Assyrian Christian town that was once held by IS before it was retaken by Kurdish-led forces. Many Syrian Christians, who make up about 10 percent of Syria’s prewar population of 23 million, left for Europe in the past 20 years, with the flight gathering speed since the conflict began in March 2011.