The hare and the Tortoise: Bitcoin emerges victorious as FAANG stocks snooze


Slow and steady, wins the race, the popular adage holds true for Bitcoin and FAANG stocks. Drawing parallels between the fable and current market, FAANG stocks emulate the speedy hare, one-directional and over-confident. While the slow tortoise can be envisioned in Bitcoin, always persistent and sets its own pace.

The tortoise of this race, Bitcoin, bid its time steadily growing in worth and took the lead at a blistering pace over FAANG, as the crumbling price of crucial US stocks of Facebook, Amazon, Apple, Netflix, and Google [FAANG] was a telltale sign of dwindling YTD return.

As 2019 set in, the Tech sector which provided strong growth and has been known as a pillar supporting the US equities market was dealt a strong blow. According to the Okex report, NYSE FANG+ Index, that calculates performance of the 10 largest US-listed tech and media companies including Facebook, Amazon, Apple, Netflix, and Google [FAANG] shrank causing its value to also experience a free fall of over 18% of its market value in May. After strenuous efforts, the stock started its ascent back up, however, it was too little and too late. 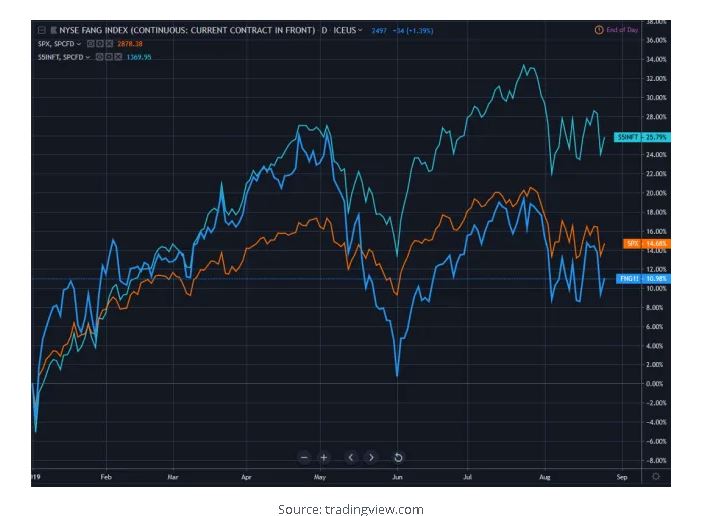 FANG+’s nosedive in May put them on the lower pedestal than broader S&P 500, which climbed up by 14% during the same period. While S&P Information Technology sector reported a good quarter, registering 25% growth compared to the Media and retail giant’s 11% YTD return.

Facebook, an important contributor to FAANG’s performance, shared the limelight with Bitcoin with the announcement of Libra. The popularity was short-lived. Libra failed to gain favor due to growing concerns about privacy from the US senate, resulting in Libra being uncomfortably placed on the back burner.

Considered a Store of value, safe-haven asset, and digital gold, Bitcoin did not disappoint investors in 2019. The price of the coin welcomed the new year at $3,693.85 and rose till $9,591.59, at press time. The initial slow pace of the tortoise might have created an illusion of being a novice, but taking advantage of the Hare’s nap, Bitcoin set on its brisk journey and reported YTD return of 166.77%, with wavering prices.

May and June witnessed the gradual Bitcoin boom, amounting a total of 242% in growth. This pushed the price of the coin from $5,269 to $13,880. Despite tumbling from this year’s ATH, BTC’s price at press time stood at $9,611, almost tripling the investments since the beginning of the year.

The market cap of all digital assets stood at $246 billion whereas the FAANG stocks market cap was $3.1 trillion in August 2019. Once considered a slow tortoise, Bitcoin shares the pedestal with time-tested assets and considered a safe-haven asset and an alternative hedge.

Moral of the story

FAANG and cryptocurrencies are both facing regulatory challenges but concerns over privacy looming over Google and Facebook have slowed them down. The speedy FAANG, once the best performing stock, however, has been replaced by an alternate asset that just beat it in its own game.