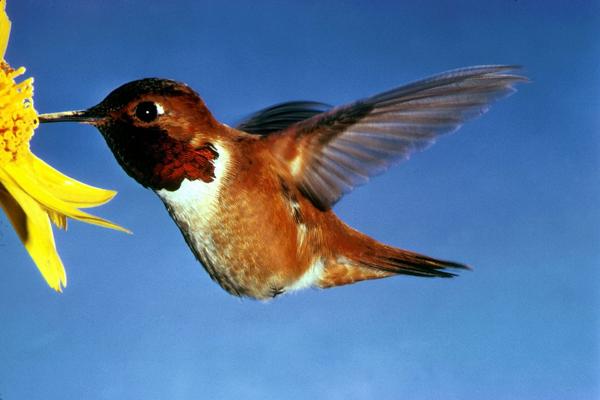 Lawnmowers droning, cicadas buzzing, the slightly skewed tune of ice cream trucks — some sounds that play the songs of summer. But of all the noises that make up the warm season, there’s one sound that sends my spouse and me eagerly searching for the source: the high trill of hummingbirds in flight.

Hearing hummers whirring overhead? It’s not your imagination; we’re in the season of migration for hummingbirds. They pass through our area twice each year, heading up to the mountains from mid-April to mid-May. They don’t linger in our yards at that time, since there are few flowers for them to sip upon.

Hummingbirds are some of the world’s smallest avians; their family contains the smallest of all birds. But don’t let their size fool you; male hummingbirds have attitude and are fiercely territorial. This results in aerial battles that look like hockey games, complete with body checks and moves to interfere with flight paths.

Hummingbirds have specialized wings with shoulders that can move 180-degrees. This, plus thin primary flight feathers at the tip, allows for rapid flight, hovering and the ability to fly both forwards and backwards. What we notice is the high-pitched humming sound made by the wing beats.

They feed primarily on nectar produced by flowers, but get protein by dining on tiny insects or spiders. To sup on the nectar, hummingbirds hover in front of the flower and extend their long, split tongues. Small, hair-like lamellae on the tongues trap the nectar for the hummingbirds to pull from the flower to drink.

Once in their mountain home, they nest, then head back down in stages beginning in early July. For this reason, the time to hang hummingbird feeders is on the Fourth of July.

Males are the first to head south, leaving the females and juveniles to linger in the mountains. After spending time alone with the youngsters, females are the next to migrate through, with juveniles trailing behind. In this leisurely migration, broadtails, rufus, black chinned and calliope hummingbirds will visit our yards through September.

Once they’ve learned that your yard is a buffet for them, hummingbirds remember where they’ve fed.  If you have feeders out or flowers they love, they’ll visit you again next year.

Attract hummingbirds to your yard by adding the color that calls to them as they wing past — particularly reds, oranges, pinks and purples. Agastache, penstemon, honeysuckles (Lonicera spp.), and currants (ribes spp.) are good choices to plant, but for a longer list of flowers to attract hummingbirds, visit gilpin.extension.colostate.edu/programs/mtn-hort/hummingbird.

Keep a small amount of sugar water in a feeder, replacing it every three to four days. But because we don’t get a lot of hummingbirds at any given time — they stop, take a drink, then keep migrating — use little feeders, one-quarter full, and change the sugar water often or it will ferment. You don’t want to get the little guys drunk — they’d be easy prey for predators if disoriented.

Mix your own concoction by using four-parts water to one-part sugar, and skip the food coloring, which is harmful to hummingbirds.  Bring it to a boil to dissolve sugar and get rid of impurities, then refrigerate it until your feeders need a refill.