Tron recently celebrated its one year anniversary and according to the data for the first half of the year, Tron DApps ruled the market again, reporting the largest number of new DApps. Tron surpassed its fierce competitors, Ethereum and EOS, with an active users base of  710.7k.

According to the DApp report, Tron saw a rise in its DApps count and the final count stood at 502. However, the DAU, transfers and transaction volume noted a dip, when compared to last week. 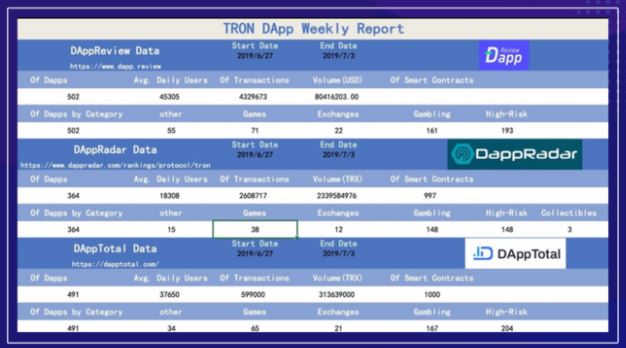 The report introduced the community with three new games. Lucky number game, Tron Boardgames, and G. Game. As the name suggests, Lucky number game requires the users to choose the right number to get rewards in TRX. Similarly, users can win rewards in Tron with Boardgames. As for G. Game, it is a new blockchain game platform with community autonomy, and aims at “autonomy, transparency and efficiency.”

Apart from DApps, Tron’s decentralized exchange, TRX.Market, has been integrated with Coin360, enhancing the Tron ecosystem. Tron has already exceeded the block height of 10.47 million and the total number of nodes is at 1,328, at press time.

As for the Tron token, it has made its way back into the top 10 cryptocurrencies’ list of CoinMarketCap. However, with most altcoins following Bitcoin’s lead, even Tron’s market seem affected by the king coin. However, the community is expecting a rally after BitTorrent Seed launches, followed by Tron CEO Justin Sun’s lunch with Warren Buffett.