Tron falls by 11.44% in under 4 hours after Justin Sun’s ‘kidney stones’ announcement


Tron, the tenth-largest cryptocurrency on CoinMarketCap, has been on an uptrend recently. Rather, it had been, until the power lunch debacle. This morning, Tron’s official Twitter handle announced that Justin Sun’s lunch with investment mogul Warren Buffett was postponed owing to health issues. More specifically, due to kidney stones.

The price of Tron started to fall at precisely 2:30 UTC, minutes before the official announcement. The token’s price has fallen by 11.44% since then. At press time, the price of TRX was $0.0256 and the market cap was $1.72 billion. While briefly it seemed that the collapse had halted, Tron later proceeded to fall by another 7.34%. The power lunch with Warren Buffett, while costing the Tron CEO a lot in terms of value for the time being, may be costing millions for the valuation of Tron’s price.

Following the announcement, the cryptoverse was abuzz with the news. Primitive Ventures’ Dovey Wan tweeted,

“BREAKING and LOL @justinsuntron cancelled his launch with Warren Buffet .. due to health issue, for REAL ??‍♀️??‍♀️ See attached from his Weibo update .. (original and auto-translated)” 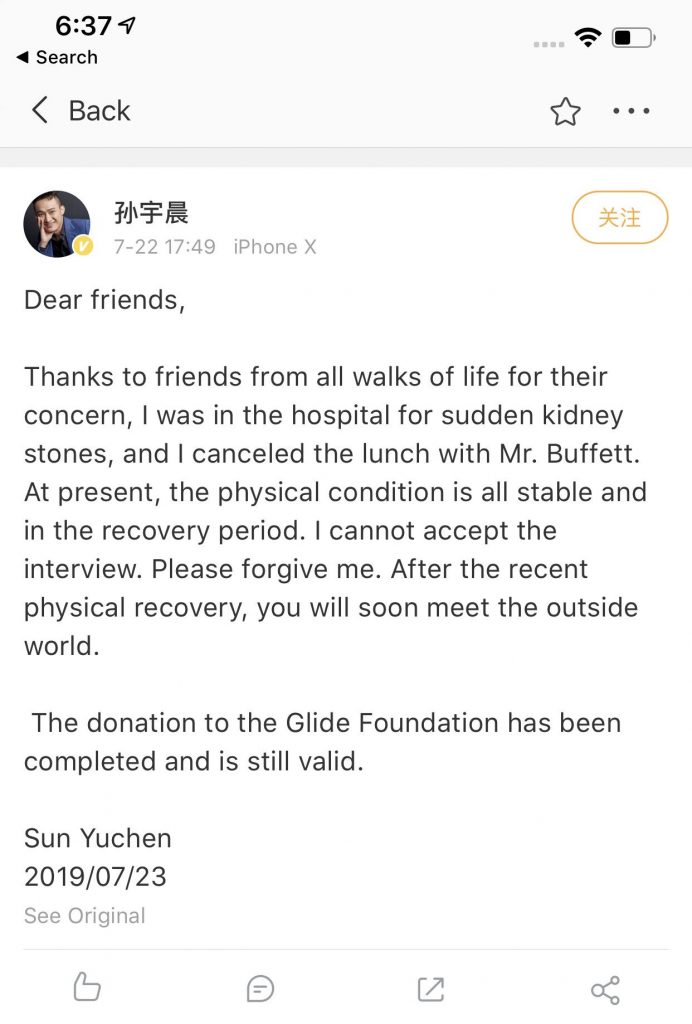 Tron wasn’t the only coin bleeding in the cryptocurrency market however. Bitcoin, the world’s largest cryptocurrency, XRP, and Bitcoin Cash were all falling by nearly 5% on the 24 hour charts. The king coin, after a few days a sideways movement, fell again and was trading at a price of $10,172, at press time.

However, other coins were performing even worse. Litecoin and EOS for instance, were down by nearly 6% over 24 hours.

Craig Wright’s Bitcoin SV sailed against the wind however as the forked coin of a forked coin was pumping instead. The aforementioned pump took the price of BSV from $167 to $181 in under two hours.