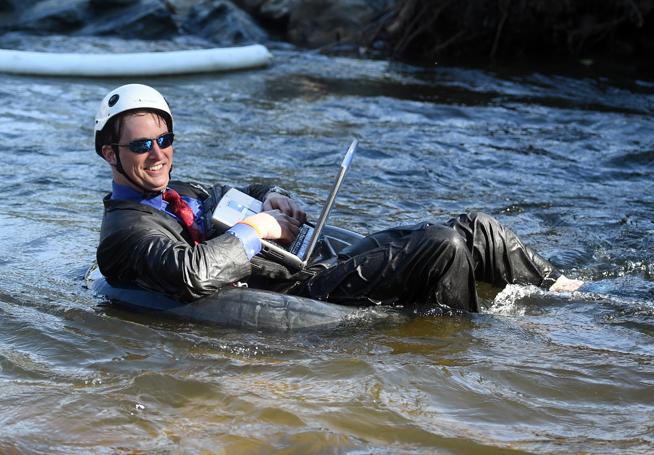 On Thursday, the first trailer for a new “Top Gun” movie made its debut, giving us a glimpse of the all the jet-flying, motorcycle-riding and (presumably) Kenny Loggins-backed action we have been waiting for.

It isn’t exactly the highway to the “Danger Zone,” but on Friday, hundreds of brave Boulder residents will take to Boulder Creek for the same reason as those pilots: The need for speed.

OK, so Tube To Work Day was actually founded by Jeff Kagan and Andy Gruel in 2008 as a celebration of alternative transportation. But that doesn’t mean the thrill isn’t part of the experience.

“I’ve got the rapids churning inside of me I’m so excited,” Kagan said. “It’s my favorite morning of the year.”

Twelve years ago, Kagan and Gruel were the Boulder Maverick and Goose, two lone commuters drifting down Boulder Creek. But the event has grown every year as a paragon of Boulder wackiness, and there will be about 1,000 people joining Kagan this time around.

Even those who might not want to get into the water can watch from the shores and bridges overlooking the creek, and even go bacon fishing off the Ninth Street Bridge.

“My biggest focus this year is trying to get more people to show up without any personal vehicles,” Kagan said.

To help with that, Kagan said pumps will be provided on site so people can navigate the trip to Eben G. Fine with a deflated tube for the 8 a.m. kickoff. Boulder B-Cycles will be free all over the city throughout the day, with a truck waiting to pick the bikes up at the park.

In addition, tubers who bring a bus receipt can get reimbursed, while there will be a walking party gathering at Central Park at Broadway and Canyon Boulevard that will feature, according to Kagan, a “stilt-walking lifeguard in booty shorts.”

Despite the growth of the event, it remains free thanks to sponsors like LogRhythm, TradeDesk, Capital One Cafe and the city of Boulder, which will provide food and entertainment. But while the event is free, tubers are encouraged to donate an hour of their salary to a chosen local nonprofit, which this year is Bridge House.

A waiver that can be filled out online before the event or at Eben G. Fine must be completed by any potential tubers, and a helmet and closed-toes shoes are mandatory. Wet suits and personal flotation devices also are recommended.

Rescue divers from Boulder Fire Rescue also will be on hand to keep an eye on the water traffic jam.

A strong winter and a wet spring have led to high water levels across the state, and Tube To Work Day will be running a little high at about 180 cubic feet per second.

“The flows are a little above average,” Kagan said. “Don’t expect a lazy river float. This will be a white-water tubing experience.”

But Kagan said Tube To Work Day vets and newcomers alike will be in for the biggest rush a rush hour commute can provide. And unlike some other work thoroughfares, Boulder Creek isn’t slowly sinking into the center of Earth.

“Expect the greatest commute of your life,” Kagan said.

What: Tube To Work Day