7 Days to Vegas, a gambling movie starring WPT announcer Vince Van Patten, was released on September 24 and is now available on Amazon Prime. I watched the flick and have a few things to say about the film and the poker commentator’s performance. 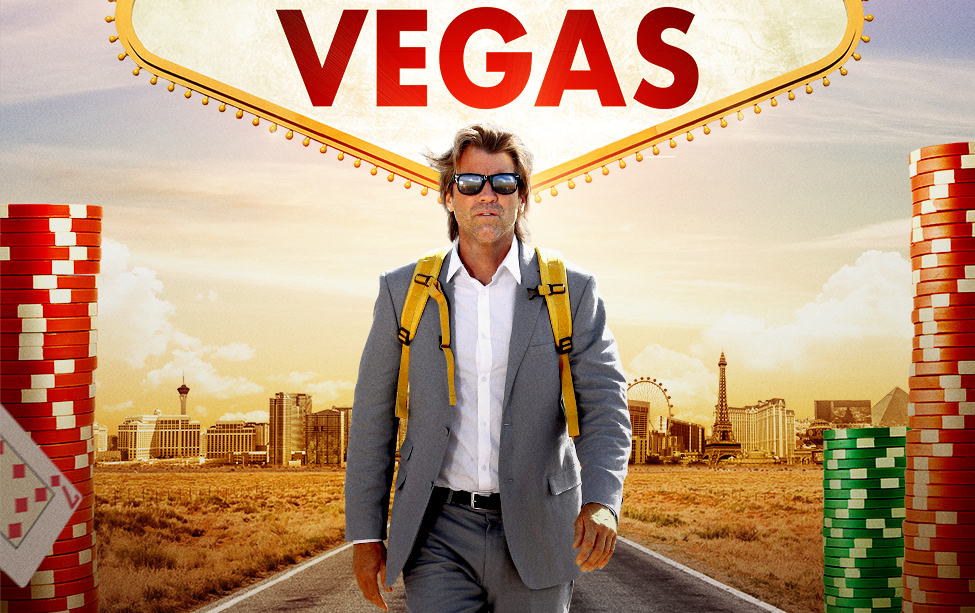 Based on a true story, 7 Days to Vegas gives viewers insight into the cutthroat world of high stakes prop betting. How far will the gamblers go to get an edge with millions of dollars on the line in a wild prop bet?

Vince Van Patten took his talents to the big screen in 7 Days to Vegas. And his father, Dick Van Patten who was a legendary actor in his time, would be quite proud of his son’s performance.

The younger Van Patten plays Duke Madson, a struggling actor who ran an underground high stakes poker game in California which attracted celebrities and wealthy businessmen. But after losing his game and his bankroll, Duke seeks an opportunity to make it all back.

So, he takes on a seemingly impossible prop bet — walk 280 miles from Los Angeles to Las Vegas in seven days. If he loses, he owes his rival Sebastian (Ross McCall), an egotistical movie director, $1 million. But if he makes it to the Las Vegas sign before time expires, at 5-1 odds, he’ll receive $5 million.

Duke, a down-on-his-luck gambler, got a lucky break in order to come up with the money. His friend, Sandor (Danny Pardo), suddenly died and left him a check for $1 million in his will.

But, as part of the bet, he only has 10 days to prepare for the walk. And it won’t be an easy task, especially for a retired athlete at age 48. There are many obstacles he will face, including the hot Mohave Desert sun, hills, and fatigue.

That doesn’t stop Duke from giving it a go. He’s a gambler and although Sebastian is quite the hustler, Duke has a few tricks up his own sleeve.

7 Days to Vegas isn’t Rounders, the most iconic poker movie ever. And although poker commentator Vince Van Patten is the star, it’s not even a poker movie. So, if you’re expecting an Academy Award-winning flick or a bunch of high stakes poker action, you’ll be sadly mistaken. But if your expectations are to watch a fun, somewhat comical, movie about crazy prop betting, you’re in for a treat.

I wasn’t sure what to expect from Van Patten as a lead actor. But his performance in 7 Days to Vegas was the stone-cold nuts. And it really shouldn’t have come as a surprise to me that Vince would knock it out of the park in this role. After all, the movie based around a prop bet that he made in real life.

Not only was the movie based on Vince’s true story, Van Patten gave some of his family members a role. His wife, soap opera star Eileen Davidson, played his on-screen wife, KC. Vince’s brother, James Van Patten, also played the role of his brother in the movie.

The movie also had cameo appearances from poker royalty such as Phil Laak, Antonio Esfandiari, Mike Sexton, and Jennifer Tilly.

Why I Enjoyed This Movie

Aside from Van Patten’s killer performance, the story line was interesting and the production quality was high. If you’re totally clueless about the world of high stakes prop betting, this movie will open your eyes as to how vicious a gambler can be with six and seven-figures at stake.

Duke’s bitter gambling rival, Sebastian, will do anything to get an edge and ensure Duke loses the bet. And, in return, Duke pulled off some bluffs of his own which helped him in pursuit of $5 million.

The script was well written and the movie doesn’t really have any dull moments. I wouldn’t say I was on the edge of my seat waiting to see how it finished. But there were some interesting and surprising twists and turns along the way that kept me entertained throughout.

I highly recommend watching Vince Van Patten chase one of the craziest prop bets ever. You can see 7 Days to Vegas right now on Amazon Prime for $4.99.