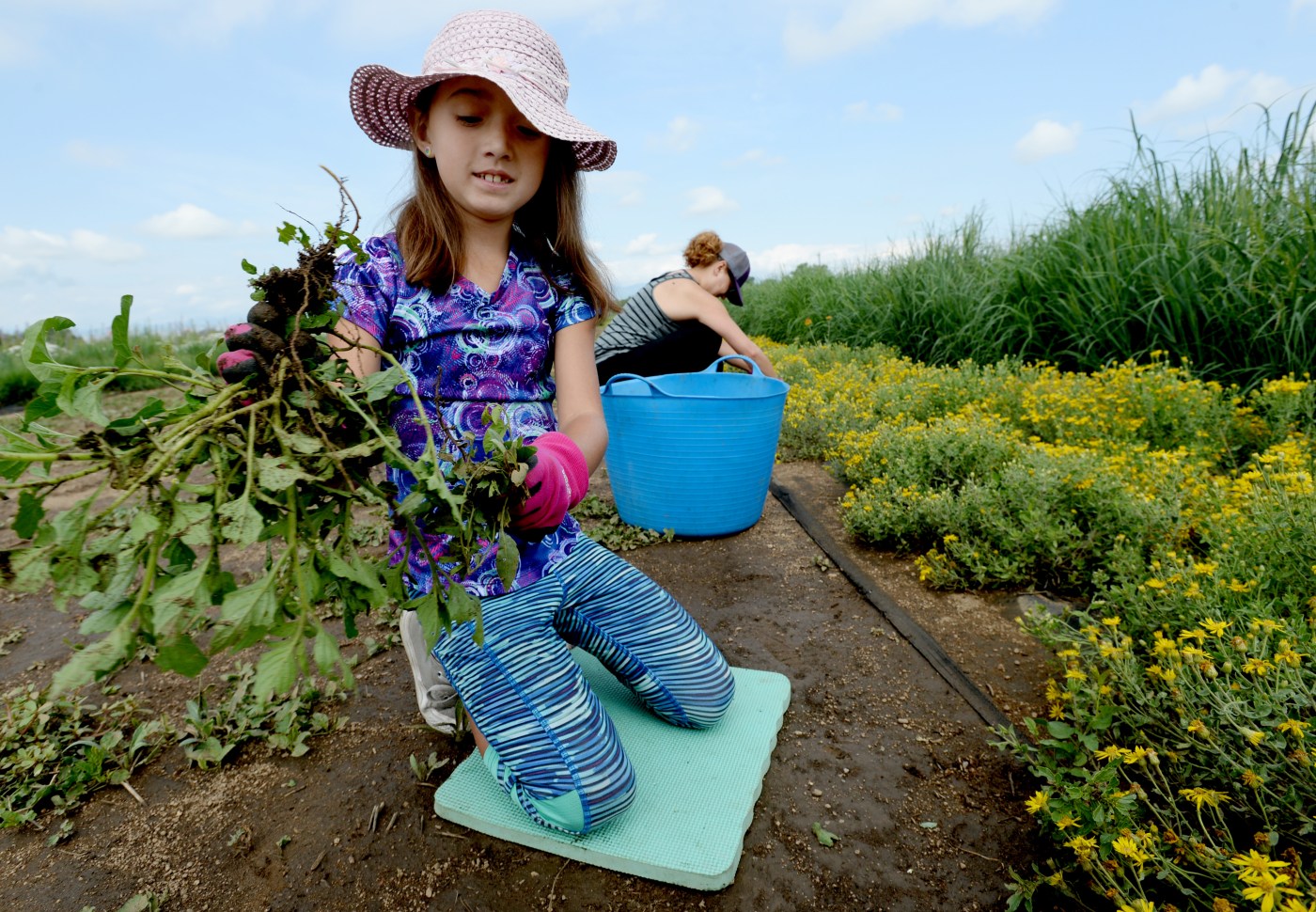 Most Saturday mornings, 8-year-old Keelyn Loomis , of Longmont, likes to volunteer to walk dogs at the humane society. This Saturday, she added tried a new endeavor to help her community.

Between rows of yellow, orange and purple wildflowers, Keelyn and her mom Holly Loomis pulled weeds at the Peck Native Seed Garden, located near Ollin Farms in Longmont.

“A lot of the time it’s her idea to go do stuff like this,” Holly Loomis said. “It feels good to help out and I like being outside.”

The mother-daughter duo joined five other volunteers in pulling weeds Saturday in the roughly quarter-acre native seed garden in an effort to keep the property and its native flora inhabitants thriving. The organic garden is pesticide free and weeding must be done by hand.

Boulder County Parks and Open Space oversees the garden which was started in 2012, with the idea to build a seed supply of Boulder County native wildflowers and grasses. Between late August and September, Emily Seddon , a seasonal plant ecologist for parks and open space, said the seeds are harvested and stored in a Longmont office. Last year, roughly 100 pounds of seed and plant material were collected from the garden.

Carrie Cimo , a plant ecologist and volunteer coordinator with Boulder County Parks and Open Space, said the seeds have the potential to provide more than beautiful wildflowers. The native plants are used to help restore areas of Boulder County damaged by wildfires and floods, among other disasters.

In 2013, when historic floodwaters ravaged many parts of the Front Range, the county used the seeds collected to help restore swaths of the St. Vrain corridor. Seeding native plants along the flood damaged area helped to repair the stream corridor from future erosion. This effort also helped “re-engage” the floodplain — a wide flat area that allows water to spread out and slow down, Cimo said, subsequently helping to protect homes and businesses from potential floods.

Having a local seed bank can also save tax payer dollars, Cimo said. She said wildflower seeds are often in high demand and can therefore be costly, but having their own Boulder County seed supply negates this cost. She added that native seeds are also more likely to have a better chance of thriving and germinating, because they have been specially adapted to the Boulder County environment.

Like Holly Loomis and her daughter, others who volunteered said it was nice to spend a morning outside.

Working along a row of bright yellow hairy golden aster flowers were Jamie and Kelly Alquiza , of Boulder. They  learned about the native seed garden about a month ago through the county’s website. Saturday marked their second time volunteering. Both expect helping out at the garden to be something they do regularly, they said.

“It’s really stress relieving,” Kelly Alquiza said. “It is kind of like cooking, but you add a wilderness component. It really feels therapeutic and calming to come out here in the morning.”

Looking out over the garden, Seddon described plants like the hairy yellow aster as an “ecological workhouse,” which is why volunteer efforts to keep the plants healthy are important.

“We really rely heavily on volunteers to help us maintain the garden and do all of our weeding by hand,” Seddon said. “They really put in a lot of hours to make this garden what it is.”

This summer marks the first that the county has sought to get the community involved in the garden through stewardship volunteer events. Volunteers can choose to help weekly between 9 to 11 a.m. Tuesdays or one Saturday a month. Those interested in getting involved can sign up by emailing Cimo at ccimo@bouldercounty.org.

Seddon said she enjoyed seeing her community get involved.

“It really just inspires me to continue to do this kind of work, because people are excited about helping to restore Boulder County’s open spaces and wild lands,” Seddon said. “Weeding a garden might not sound very attractive, but it really has a bigger purpose. There’s a bigger picture there to really be stewards of the land.”