XRP outperforms BTC, ETH; records the most number of transactions in the last 24 hours


Despite a lot of FUD surrounding Ripple, it continues to grow. The Brad Garlinghouse-led firm has developed itself to be one of the most ambitious blockchain companies which had continued to rope-in institutional support. In the latest news, Ripple was integrated with South Korean ‘Sentbe’ in its payment network.

XRP, on the other hand, had crashed alongside its peer coins and was in a recovery phase. Ripple’s in-house cryptocurrency had failed to propel major gains following a brief breakout and dropped below the $0.38 key level. The third-largest cryptocurrency was trading at a price of $0.33, at press time and constituted 5.7% of the entire market cap of $290.6 billion.

In terms of transactions in blockchain per day, however, XRP recently touched a one-year high. The numbers sustained a significant fall on the day of the market crash, where the figures fell to 513.4k. However, on 9 July, 2019, the transaction figures peaked to 1.219 million. The number of transaction on the 20th of July stood at 1.112 million.

In another feat for Ripple’s native cryptocurrency, XRP recorded the highest number of transactions in the last 24 hours. According to the data charted by BitInfoCharts, over the past day, XRP constituted of 49.1% [1,112,238] of the total number of transactions. Ethereum followed the trail amassing 25.2% [570,938] of the total while the largest cryptocurrency by market cap, Bitcoin represented 13.6% [306,328] 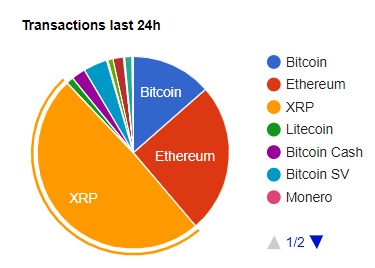