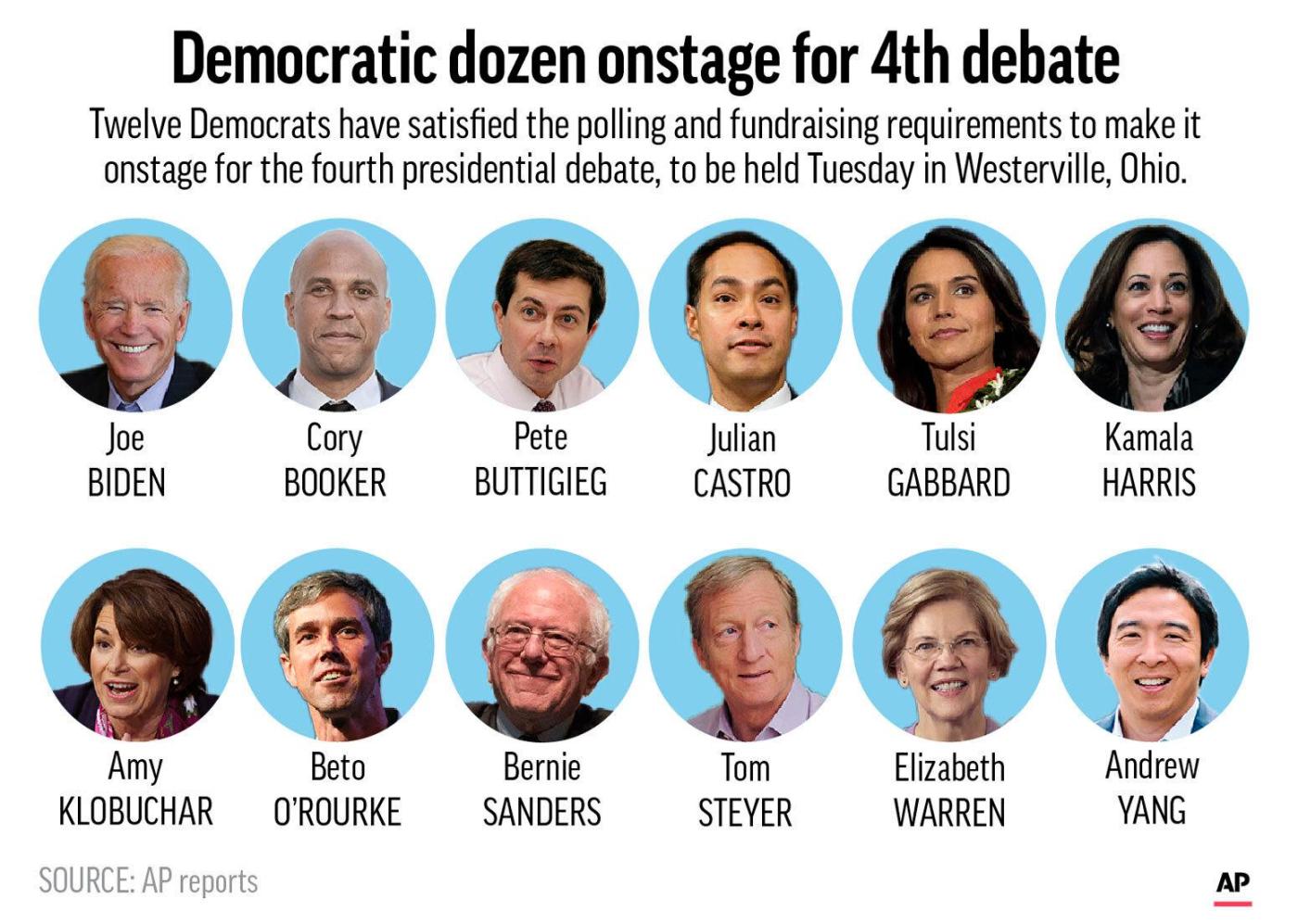 WESTERVILLE, Ohio — Just a month has passed since the last presidential debate, but the state of the Democrats’ 2020 race has shifted.

The political world is suddenly consumed by an escalating impeachment inquiry, one of the leading Democratic presidential hopefuls is recovering from a heart attack and Joe Biden is no longer the only front-runner. The evolving storylines will play out on national television tonightt in battleground Ohio, where the largest debate group in modern history — 12 candidates — will share the stage less than four months before the first 2020 primary votes are cast.

Six big questions heading into the debate, to be carried on CNN:

Less than two weeks after being rushed to the hospital, 78-year-old Bernie Sanders must convince voters that he’s physically strong enough to survive the intense campaign ahead and, more importantly, one of the world’s most demanding jobs. Supporters suggest the Vermont senator can use the health crisis to his advantage by refocusing the conversation on health care. Others are hopeful he can use the experience to open up to voters on a more personal level, something he tried to do early in the year with little sustained success. Health is a delicate issue, but Sanders was aware that his age was a political liability even before his recent health scare.

HOW WILL WARREN HANDLE THE FRONT-RUNNER FOCUS?

Elizabeth Warren enters the night as a front-runner for the first time, with some polls showing her essentially tied with Biden atop the field. If recent days are any indication, she could be in line for far more scrutiny than she received in the first three debates. She has an opportunity to stand up to her critics, which could help improve the perception that she’s among the least electable Democrats in the race. It’s no small task. On one side, she’s getting hit for being too liberal. On the other, she’s getting hit for being a capitalist. She’s also facing new questions about her biography that strike at the core of any successful candidacy: authenticity.

HOW WILL BIDEN DEFEND HIMSELF AND HIS FAMILY?

Biden enters the night already on his heels, having lost his sole claim to front-runner status thanks to Warren’s rise. At a pivotal point, he must now execute an effective strategy to move past baseless allegations fueled by President Donald Trump about Biden’s son’s business dealings abroad. Should Biden fail to navigate the delicate issue, he risks being haunted by the controversy into the general election should he be the nominee. In Biden’s way is his own temperament. The 76-year-old Democrat is well known for being defensive when challenged. Look for him to get some help from fellow Democrats, like Julián Castro or Beto O’Rourke, who have lashed out at Trump’s tactics against Biden recently. But there are also wildcards onstage who may lean into questions about the younger Biden’s work for a Ukrainian energy company while his father was vice president. If he loses his cool onstage, Biden could win the argument and still walk out a loser.

Foreign policy has often been an afterthought in the previous debates, which has allowed candidates with little experience on the world’s stage to breeze past a hugely consequential subject. Recent events in the Middle East will almost force that dynamic to change Tuesday night. The Turkish invasion of Syria, a move apparently blessed and then condemned by Trump, is still ongoing. Democrats and Republicans alike have condemned Trump’s uneven leadership on the issue, but there will be new pressure on the Democratic presidential contenders to outline their own plans for the region and beyond. A lack of foreign policy experience took a toll on Sanders in his first presidential bid, while Warren has devoted the vast majority of her detailed plans to domestic issues. Biden’s team sees foreign policy as a strength given his extensive experience on the world’s stage, but he’s also hobbled by several foreign policy missteps — not the least of which is his 2002 vote to authorize the use of force against Iraq.

Even with only 10 on the stage in past debates, moderators have been challenged to foster meaningful exchanges that help voters navigate differences among the candidates. Will two more make it even worse? Some candidates certainly think so. So far, the crowded stages have largely produced status-quo debates in which few candidates have enough time to help or hurt themselves significantly. That’s been good news for the top-tier candidates and not-so-good news for those struggling near the bottom. Given that this could be the last opportunity for several lower-tier candidates on the debate stage because of tougher qualification thresholds, those in the bottom of the pack must find enough oxygen to break out any way they can.

IT HAS CONSUMED WASHINGTON, BUT WILL IMPEACHMENT CONSUME THE DEBATE?

All the candidates onstage have endorsed the impeachment inquiry into Trump, which has consumed much of the political world in recent weeks. But some Democrats have embraced the divisive process more reluctantly than others. Warren, for example, called for Trump to be impeached nearly six months ago, while Biden announced his support for impeachment only last week. Hawaii Rep. Tulsi Gabbard was also late to sign on, warning that the impeachment process would further split an already divided nation. It’s unclear how impeachment may shape the debate tonight, but what Democrats say or don’t say about removing a sitting president less than a year before the election could come back to haunt the party when Democrats eventually take back the White House.